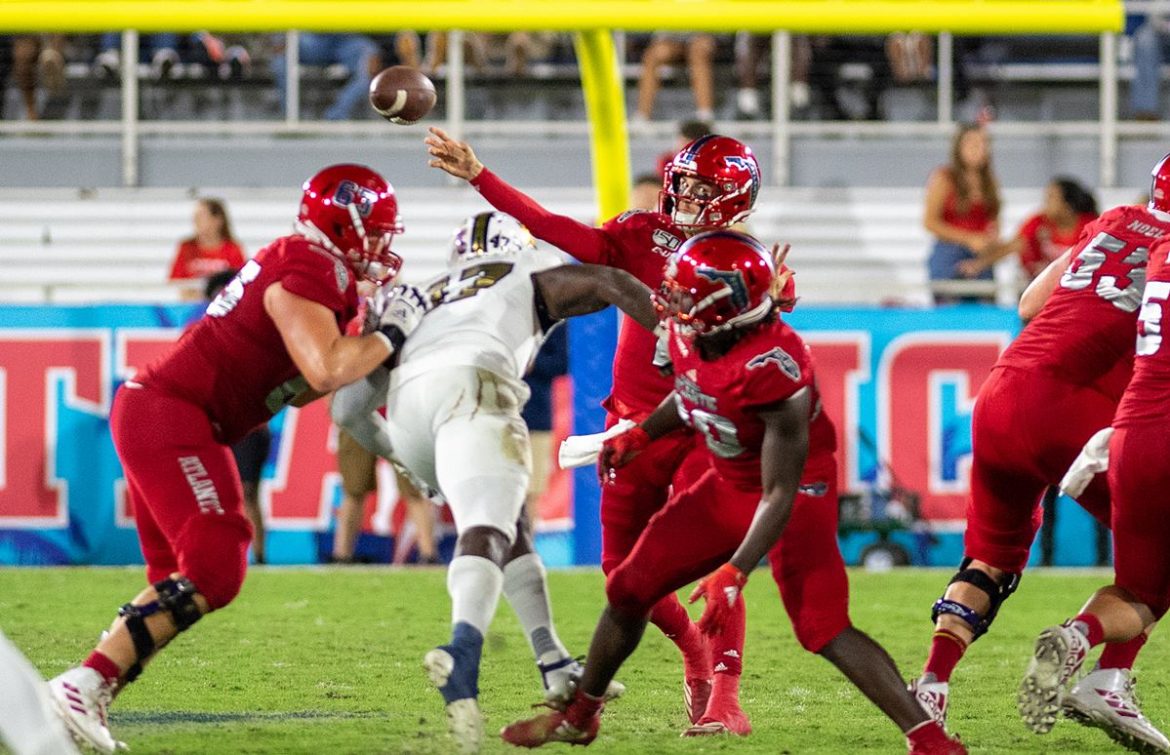 FAU QB Chris Robison has significantly cut down on interceptions during his second season as a starter. (Photo courtesy Robson Lopes)

BOCA RATON – None of the Chris Robison throws which produced 298 yards and a touchdown in the FAU win over FIU two weekends ago stand out more to coach Lane Kiffin than a seemingly meaningless completion that failed to gain a single yard.

Leading 28-7 midway through the third quarter, Kiffin called a play intended to deliver a knockout punch to the Panthers – a deep throw on a drive-launching first-and-10 from the Owls’ 18.

Prior to sending Robison to the field for that series, Kiffin instructed his quarterback to be smart, not to force a throw down field if the receiver wasn’t open.

When the downfield play didn’t materialize, Robison checked to DeAngelo Antoine for a completion that only reached the line of scrimmage. But the Owls’ offense lived to play another down.

“He could have forced it way down field but he didn’t, and he probably would have a year ago,” Kiffin said of Robison’s decision.

“That’s decision making,” Kiffin said. “That’s not being a freshman any more and not throwing it to them.”

With 2,637 passing yards, Robison has already surpassed his total for all of last season. Only two Conference USA quarterbacks have thrown for more yards this season. North Texas’ Mason Fine is the lone C-USA slinger with more touchdown passes. Yet only one C-USA quarterback with more than seven starts this season, FIU’s James Morgan, has thrown fewer interceptions.

Robison has yet to throw more than one interception this season in any single game this season, and two his four picks came late in games where the Owls needed to take chances and score quickly.

His 18 touchdown passes this year represent six more than he threw all of last season. Robison’s year-to-year turnaround is the biggest reason FAU is currently for second nationally in turnover margin at plus 13.

“I’m definitely pleased that I’ve gotten better at taking care of the ball and getting the ball into the end zone, but I’m still not satisfied with my performance,” Robison said.

Kiffin and Robison talk frequently about performing in the “gray area,” a part of the game where the quarterback has to make a fast decision about what to do with the ball. Robison is working to eliminate rash decisions, to balance aggression with intelligence. He understands better that throwing the ball away doesn’t end drives – sometimes it preserves them.

That zero-yard completion to Antoine against FIU started a 12-play drive that saw the Owls reach the Panther 4 before turning the ball over on downs. 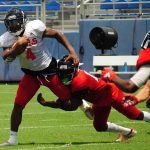 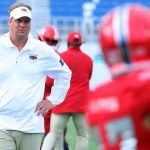