Tool Time
Chris Tooley intercepted a pass and returned a fumble recovery for a touchdown in FAU's 45-0 victory over Bethune-Cookman. See the video highlights here.

BOCA RATON – Reserve FAU cornerback Chris Tooley came off the bench to deliver his best game as an Owl during Florida Atlantic’s 45-0 victory over Bethune-Cookman on Saturday.

Tooley intercepted one pass, his second of the season, and returned a fumble for a touchdown in FAU’s 45-0 victory over Bethune-Cookman on Saturday. He was also credited with two tackles in the game.

Freshman nickel Da’Von Brown was credited with the hit that caused the fumble.

The victory improved FAU’s record to 1-2 on the season.

FAU’s defense as a whole dominated B-CU. The Owls only allowed the Wildcats 117 yards of total offense while recording their first four sacks of the season. The shutout was he first for an FAU defense since blanking FIU in 2006.

One media member from each Conference USA school votes on the weekly awards.

FAU heads to Buffalo this week for the Owls’ final non-conference game of the season. 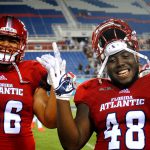 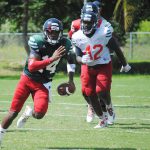