BOCA RATON – Setting aside the legitimacy of a nickname a player gives to himself, Jovon Durante may be onto something.

While Pittsburgh Steelers’ wide receiver Antonio Brown may quibble with Durante over who is the “real” Tony Toe-Tap, twice over the past two weeks Durante displayed that toe-tapping ability for big plays along the sideline.

Against Bethune-Cookman Durante crossed the goal line, then broke toward the right sideline, and Chris Robison threw the ball where only he could catch it.

Durante dove for the ball, cradling it it his arms while still managing to get a foot down in bounds, dragging in inches before touching the sideline for a 10-yard touchdown.

In the fourth quarter of Friday’s loss to UCF, with the Owls driving, Durante made a similar catch deep in Knights’ territory, extending a drive that ultimately ended in a five-yard Devin Singletary touchdown run.

“On that catch that I had against UCF the ball was out of bounds, basically, so I just got myself in the right position and reached out and caught it and I still had my feet in,” Durante said. “Just me and the quarterback were on the same page.”

Both of those catches were reviewed, and upheld, by the replay official.

It’s no accident that Durante made such catches. Plays like that are always on his mind.

During his free time Durante will work with his roommate, backup FAU QB De’Andre Johnson, on keeping his toes in bounds, making it easier for Durante to execute those plays in games.

“It’s just a feel of where you are on the field,” Durante said. “Whenever it’s a sideline catch or it’s a ball where I have to make a play where I have to have my two feet in, that’s stuff that I practice on my own time, just having my roommate throw me the ball and just tapping my feet just on the sidewalk or on the field. Just practicing every day. Obviously, it carried over into the game.”

A transfer from West Virginia, Durante emerged as the Owls leading wide receiver this season. Through four games, his 27 receptions are nine more than Willie Wright has. Durante has 333 receiving yards. No other Owl has reached the 200-yard mark.

Both Durante and Wright have two touchdown catches – tied for the team lead.

Durante says his those catches along the sideline are some of the most exciting plays in a receiver’s repertoire. 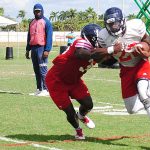 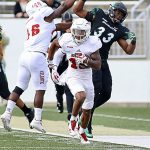