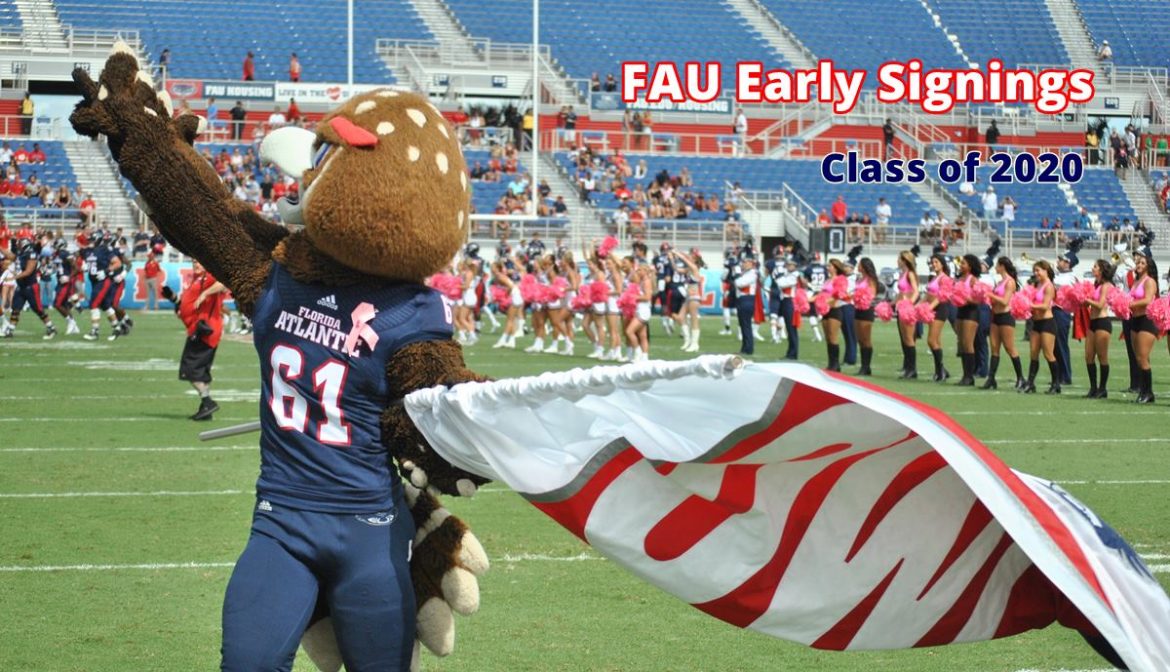 Early Signing LIVE!
Follow all the action from the opening of the early signing period and learn about the newest FAU Owls as they sign their NLIs.

It’s the first day that high school seniors and junior college players can sign their National Letters of Intent, changing their recruitment status from a commitment to a signee.

Some of the players who sign today will arrive at FAU in January, allowing them to participate in spring practices. Others won’t make it to Boca Raton until the summer.

FAU currently has 11 known commits, but not all will sign on Wednesday. When we get word that a player has signed we’ll add their profile to the list below.

Justin McKithen, WR, New Hampstead (Ga.)
Height: 5-10, Weight: 160
Scouting Report: Fast – 4.3 in the 40-yard dash fast. Finished third in the 100 meters at Georgia’s Class 5A high school meet. Most likely will play slot receiver for the Owls.
Other Suitors: Arkansas showed interest before that coaching change. Southern Miss offered, as did some Sun Belt schools.
The Word: “He gets a hole on a bubble screen or a speed sweep and he’s really shot out of a cannon. He’s faster than everyone else on the field.” – New Hampstead coach Kyle Hockman

Charles Toombs, S, Immokalee
Height: 5-10, Weight: 155
Scouting Report: Multi-talented athlete intercepted six passes as a senior, returning one for a touchdown, and also returned two punts for TDs. Will play safety at FAU, but also played running back, wide receiver kicker and punter at Immokalee.
Other Suitors: Iowa St., NC State, and Kentucky were among the Power Five schools pursuing Toombs but he selected FAU, and stuck with his commitment because the Owls’ interest never waned.
The Word: “He’s definitely a God-gifted athlete. What he does with the frame that he has and how he’s able to do it, I don’t think there’s a drill that a coach could (devise) for a normal athlete to be as explosive from sideline to sideline.” – Former Immokalee coach Rodelin Anthony

Alvin Dempsey, DT, East Central (Miss) CC
Height: 6-1, Weight: 300
Scouting Report: Potential stalwart in the middle of the defensive line. Dempsey plugs holes against the run, but can also rush the passer when called upon. Intercepted two passes this season, returning one 80 years. Recorded a scoop-and-score as a freshman.
Other Suitors: North Texas (former commit), Troy, Arkansas St.
The Word: “He’s got a chance to play at the next level. He’s very quick. Fast for his size. He checks all the boxes, honestly.” – Rudy Griffin, ECCC defensive line coach

Joe Lewis, LB, Tampa Tech
Height: 6-2, Weight: 215
Scouting Report: Possessing good size and speed, Lewis could play either linebacker or safety. With the trend toward positionless defense, maybe he’ll do both. Also played centerfield on the baseball team.
Other Suitors: Lewis committed to FAU early in the 2019 process, keeping most other suitors at bay.
The Word: “He plays linebacker but he covers guys like a DB. You don’t find that combination in a 6-2, 200-pound kid.” – Tampa Tech coach Jayson Roberts 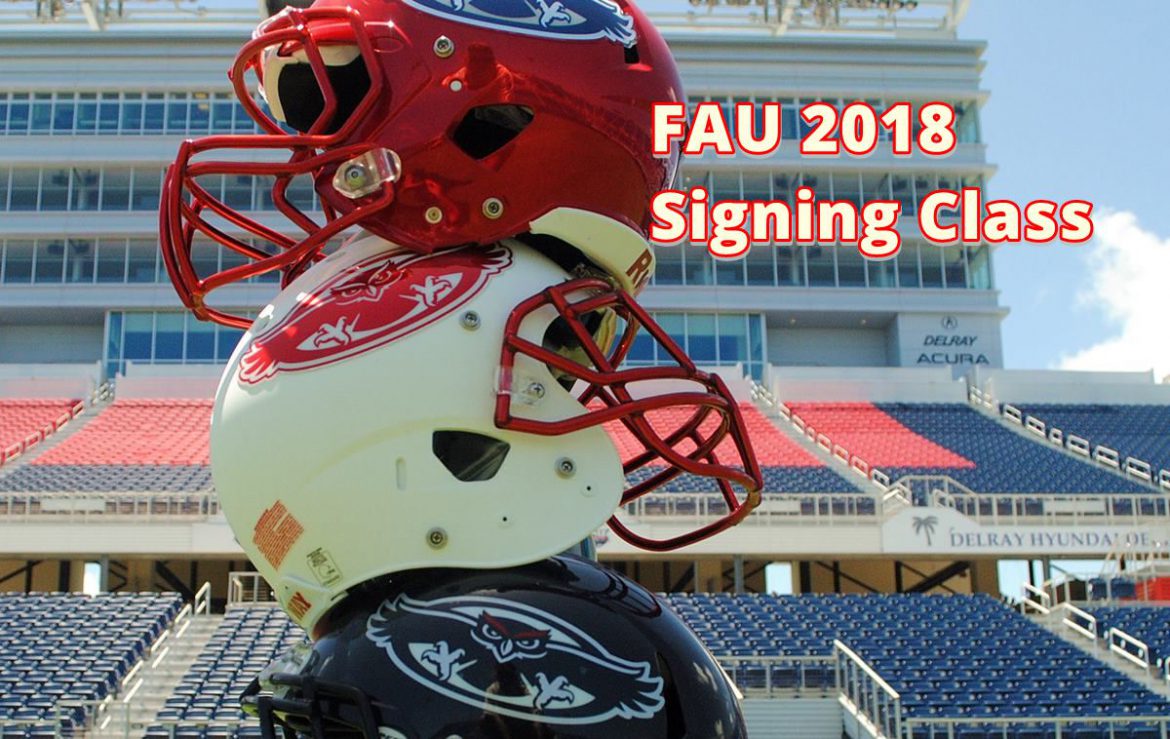 Signing Day LIVE!
Keep your browser locked on this page for the latest signings along with information about the players who signed with FAU.

Lane Kiffin is about to learn the composition of his second recruiting class at FAU. Follow all the signings and the disappoints – should there be any – on OwlAccess.com. We’ll be tweeting the latest news. Below the Tweet Box we’ll list FAU’s 2018 signees along with some pertinent information about them.

Armani Adams CB (5-11, 180), St. Petersburg-Lakewood – Only made one official visit, and that was to FAU. At one point was an Arizona commit. Thirteen of his 72 tackles as a senior went for loss. “He can play strong safety. He can play corner. He can play nickel.” – Lakewood coach Cory Moore

Zack Bennett C (6-3, 280) Arizona Western CC – Kansas and UCLA showed late interest in Bennett. Saw a lot of himself when watching the way All-Conference USA guard Roman Fernandez played last season. Has two years of eligibility plus a redshirt season remaining. “I think FAU, right now, is putting me in the best position to go to the NFL.” – Bennett

Malcolm Davidson RB (5-10, 180) Kissimmee-Osceola – One of the fastest running backs available this recruiting season. Mostly an outside runner, rushed for more than 3,000 yards and 38 touchdowns over his final three seasons despite being limited by a rib fracture as a senior. Chose FAU over East Carolina, UCF and Kentucky. “Really quick. Has a strong lower body. Runs through a lot of tackles. Great breakaway speed.” – Osceola coach Doug Nichols

Meiko Dotson CB (5-10, 190) Garden City CC – Primarily a corner, Dotson began his career at Georgia Tech, where he recorded two tackles before transferring to Garden City. Dotson’s four interceptions in 2017 tied him for No. 18 nationally at the JUCO level. “I felt like that was the best spot to prepare for the next level.” – Dotson via text message.

BJ Emmons RB (6-0, 230) Hutchinson CC – Former Alabama running back, left the Crimson Tide after one season. Played that 2016 season under offensive coordinator Lane Kiffin. South Carolina and Louisville were serious suitors. Emmons averaged 4.6 yards per carry and scored 10 touchdowns in 12 games for Hutchinson. He fumbled the ball seven times, losing four of them. “You’re right there on the beach. You are surround by everything, really. Great coaches. I got a good bond with (running backs coach Kevin) Smith.” – Emmons

Cordel Littlejohn QB (6-4, 190) Lincolnton (N.C.) – Threw for 50 touchdowns and more than 3,500 yards as a junior. Former Illinois commit. Lane Kiffin told Littlejohn that he reminded him of Alabama quarterback Jalen Hurts. “He really likes how I can throw the ball and run the ball.” – Littlejohn relaying Kiffin’s comments.

Marquice Robinson OL (6-4, 315) Austin (Ala.) – Schools like Auburn and Mississippi St. showed early interest but backed away because of academic issues. Strong first semester of senior year – all As and Bs – have Robinson on track to qualify. Started 41 games over three seasons. Can play guard or tackle. “They’re getting a steal.” – Austin coach Jeremy Perkins.

Marcel Southall DT (6-2, 280) Tyler J.C. – Former Texas Longhorn visited FAU prior to the early signing period but elected not to sign. Recorded 22 tackles, including seven for loss, in eight games at Tyler. Has three years of eligibility remaining. Decision came down to FAU and Louisiana-Lafayette. “He’s a great football player. Anybody who gets him is going to be lucky to have him.” – Tyler defensive line coach Alex Wierzbicki

Teja Young Ath (5-11, 175) West Palm Beach–Palm Beach Lakes – Arguably the most athletic of FAU’s signees, Young can help the Owls in all three facets of the game. Played quarterback as a senior, but his offensive contributions likely won’t come there. Formerly a Colorado St. commit, Young can play corner or safety and will also return kicks. “They said they wanted him to play both sides of the ball. I’m going to assume they are going to find a package for him.” Lakes coach Al Shipman.

Dacoda Weaver OL (6-5, 320) Lakeland – Decommitted from Liberty in the days leading up to signing day. More of a run blocker in high school but gained proficiency in pass protection. “He got better and better as the season went along,” Lakeland coach Bill Castle said. “His best football is definitely ahead of him.”

Junior Diaz C (6-4, 305) Tulane – Not exactly a signee, Diaz is a graduate transfer. Became a starter as a redshirt freshman and remained in that spot throughout his career with the Green Wave. Was a high school teammate of FAU left tackle Reggie Bain at Miami-Central. Appears to be the likely successor to All-Conference USA center Antonyo Woods, who graduated. “That’s also one big reason I chose (FAU),” Diaz said. “That’s a position that I would fit in perfectly.”

Devin Hayes OL (6-6, 250) Orlando-Jones – Could actually play offense or defense for the Owls. Committed to FAU during a visit to watch the Shula Bowl. Is a defensive end who moves like a tight end. “I want to be part of a winning program.” – Hayes.

Desean Holmes WR (5-10, 180) College of the Canyons – Originally signed with San Diego St. Recruited to USC while current FAU coach Lane Kiffin coached the Trojans. Could also make an impact as a kick returner. “If things happen twice, it was meant to be. It’s kind of crazy how that worked out.” – Holmes on finally getting to play for Kiffin.

Nero Nelson WR (6-0, 180) Copiah-Lincoln – A former Mississippi St. commit, Nelson can play wide or in the slot. Similar in style, but much bigger than, former FAU wide receiver Lucky Whitehead, Nelson could also return punts or kicks. ““He’s kind of an electric guy when he gets the ball in his hands.” – Copiah-Lincoln coach Glen Davis.

Signing Day LIVE!
Keep your browser locked on this page for the latest signings along with information about the players who signed with FAU.
was last modified: February 7th, 2018 by FauOwlAccess
February 7, 2018 0 comment
1 Facebook Twitter Google + Pinterest