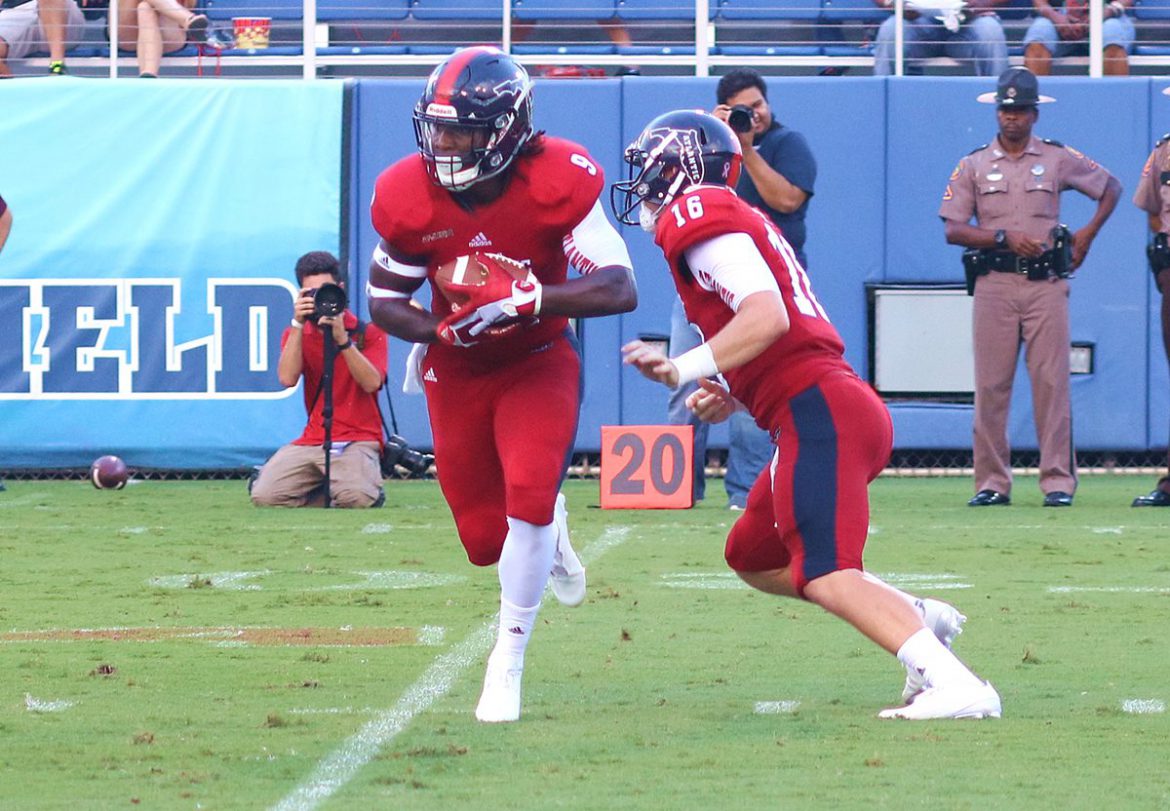 All or nothing
FAU hit two big runs against Southern Illinois, but the remainder of the Owls' rushes didn't produce much - something FAU hopes to improve against Miami.

FAU rushed for 170 yards and three touchdowns on Saturday against Southern Illinois. The rushing game, specifically Buddy Howell’s legs, provided two of the most memorable plays – touchdown runs of 48 and 37 yards.

But remove those runs from the total and FAU running backs averaged only 2.3 yards per carry on their other 27 carries, doing so against an FCS opponent.

New offensive coordinator Travis Trickett called the Owls rushing attack in the first game “solid,” but noted the offensive unit as a whole has plenty of mistakes to fix before facing Miami on Saturday.

“When we didn’t do what we wanted to do it went across the board – it was very equally distributed as to what we have to clean up,” Trickett.

Some of the issues can be attributed to an offensive line that had to be reshuffled in the week leading up to the game because of injuries. One good run was called back by a penalty. And there were times the running backs didn’t wait for the hole to open.

“I thought we left some plays on the field read-wise that we’ll clean up,” running backs coach Jared Allen said.

Howell rushed for 128 yards, taking his first carry of the season to the end zone.

He wasn’t concerned that his carries either went for big yardage or virtually none at all.

Redshirt freshman Kerrith Whyte actually drew the start in his first game because the Owls ran a scripted play called prior to kick off, gaining three yards on his first collegiate carry.

“That being my first college career game it felt good, you know?” said Whyte, who averaged 1.8 yards on his 11 carries on the night. “I got the first hit in – just getting my feet wet. It was a good experience.”

FAU wanted to take it easy with Jay Warren, who’s been dealing with an undisclosed injury during camp. He only received one carry in the game in part because the Owls didn’t like defensive scheme the Salukis employed during the specific packages designed for Warren. The Owls simply scrapped those packages, which left Warren on the sideline.

“It was Buddy’s day,” Allen said. “That’s great. He earned that starting spot and he really is our starter.”

Warren rushed for 132 yards in the first half against Miami last season before exiting with an injury. It is unclear how much he’ll be able to carry the ball on Saturday.

True freshman Devin Singletary gained one yard on his lone carry of the night. The Owls plan to make a point of getting Singletary carries each game, Allen said, incorporating him into an increasing amount of the game plan as the season progresses.

“We wanted to get him in there,” Allen said. “We probably should, have gotten him in there more. It just didn’t work out.”

All or nothing
FAU hit two big runs against Southern Illinois, but the remainder of the Owls' rushes didn't produce much - something FAU hopes to improve against Miami.
was last modified: September 9th, 2016 by FauOwlAccess
September 9, 2016 0 comment
0 Facebook Twitter Google + Pinterest