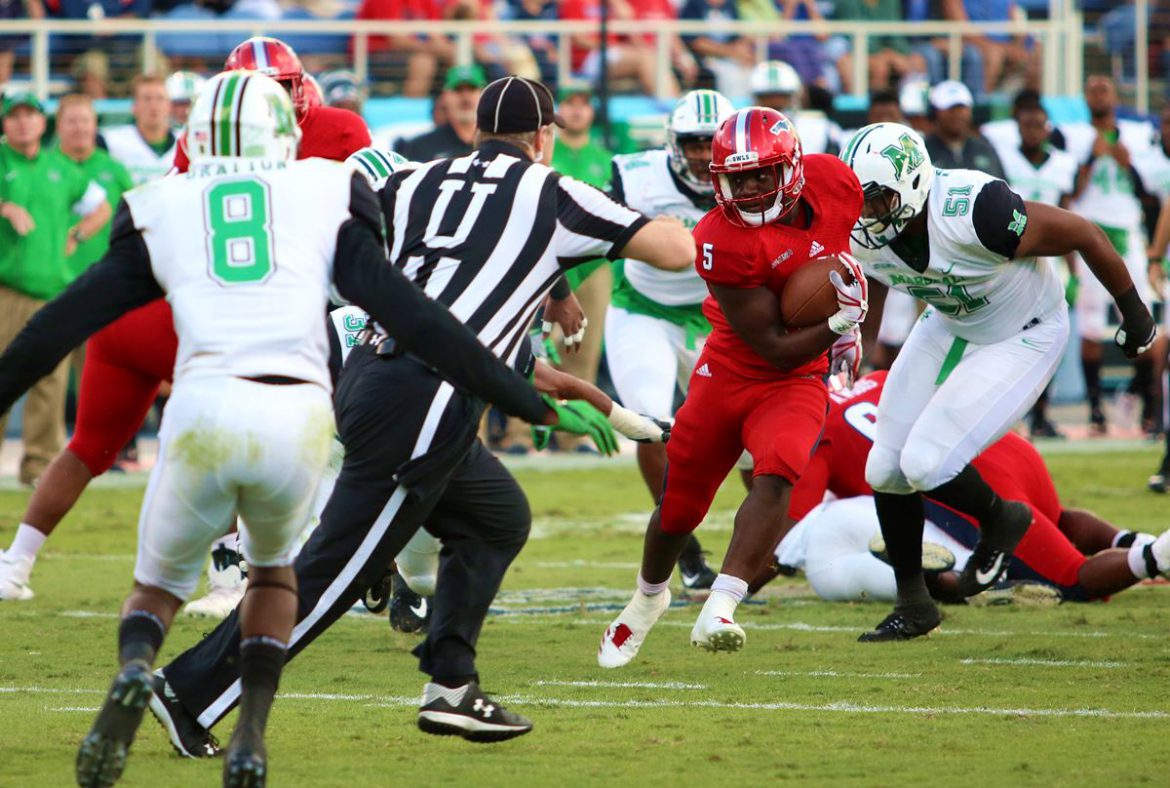 BOCA RATON – Of all the mind-boggling statistics FAU’s offense produced thus far, this one may be the craziest: 10 FAU players average more than 5.5 yards per carry.

One of them is punter Ryan Rickel.

Throughout fall camp FAU coach Lane Kiffin told anyone who listened that although Kendal Briles’ Baylor offense is widely considered pass-happy, it packs a pretty good running game, too.

To highlight the player contribution to the equation, Kiffin pointed at Devin Singletary’s 13-yard touchdown run against Marshall. At the start of that play, Singletary had to sidestep a Marshall defender in the backfield to get loose.

“The defensive end came free and (Singletary) makes the guy miss, goes through the tackle and goes and scores,” Kiffin said. “Everybody saying we looked great. I laughed on the sideline. I turned to Kendal and went, Hey that was an awesome call by us and we celebrate and whatever. I’m like, Hey, by the way, we didn’t block the defensive end. It’s called good recruiting. Thank the last staff for that.”

Singletary currently leads the nation with 19 rushing touchdowns, and his 1,256 rushing yards trails only Alfred Morris’ 1,392 in 2009 as the best single season ever at FAU. He leads Conference USA in rushing and is fifth nationally.

He’s eclipsed the 100-yard mark in each of the Owls’ past seven games and surpassed the 200-yard plateau in the past two games.

At 284.0 yards per game, FAU leads Conference USA in rushing.

Averaging 6.7 yards per carry, Singletary is one of four running backs averaging better than 6.0 yards per carry. Helped by an 82-yard touchdown run against North Texas, Kerrith Whyte leads the way with a 7.7 yard average. Buddy Howell comes in at 6.6 yards per carry and little-used Gerald Hearns averaged 6.2 yards on his 10 carries.

Three wide receivers are included in the 10-player group, led by John Franklin’s 17.5 yards per carry. Franklin’s only carried the ball six times, but he’s found the end zone twice. Willie Wright averages 7.6 yards per carry and scored the first rushing touchdown of his career – a 19-yarder – against Marshall. Kamrin Solomon only carried the ball twice, but both of carries gained at least seven yards.

Two quarterbacks make the list. Jason Driskel’s 5.6 yards per carry is even more impressive considering sacks count as negative rushing yards. De’Andre Johnson rushed for 31 yards on four tries in his lone game before undergoing surgery to remove blood clots in his arm. Kiffin is not expecting Johnson back this year.

And then there’s Rickel, who carried the ball twice in FAU’s win over Western Kentucky. His first opportunity came on a botched field goal snap. He only made it as far as the line of scrimmage. His second carry came by design, giving FAU a crucial first down on a fake punt that covered 22 yards.

That final play from scrimmage against Marshall, where Rickel deliberately ran backward to his own end zone, ultimately taking a safety? Those negative 24 yards were credited to the team, not him, because the play called for him to take the loss. Statistically it’s viewed the same way a kneel down in victory formation doesn’t count against a quarterback’s rushing total.