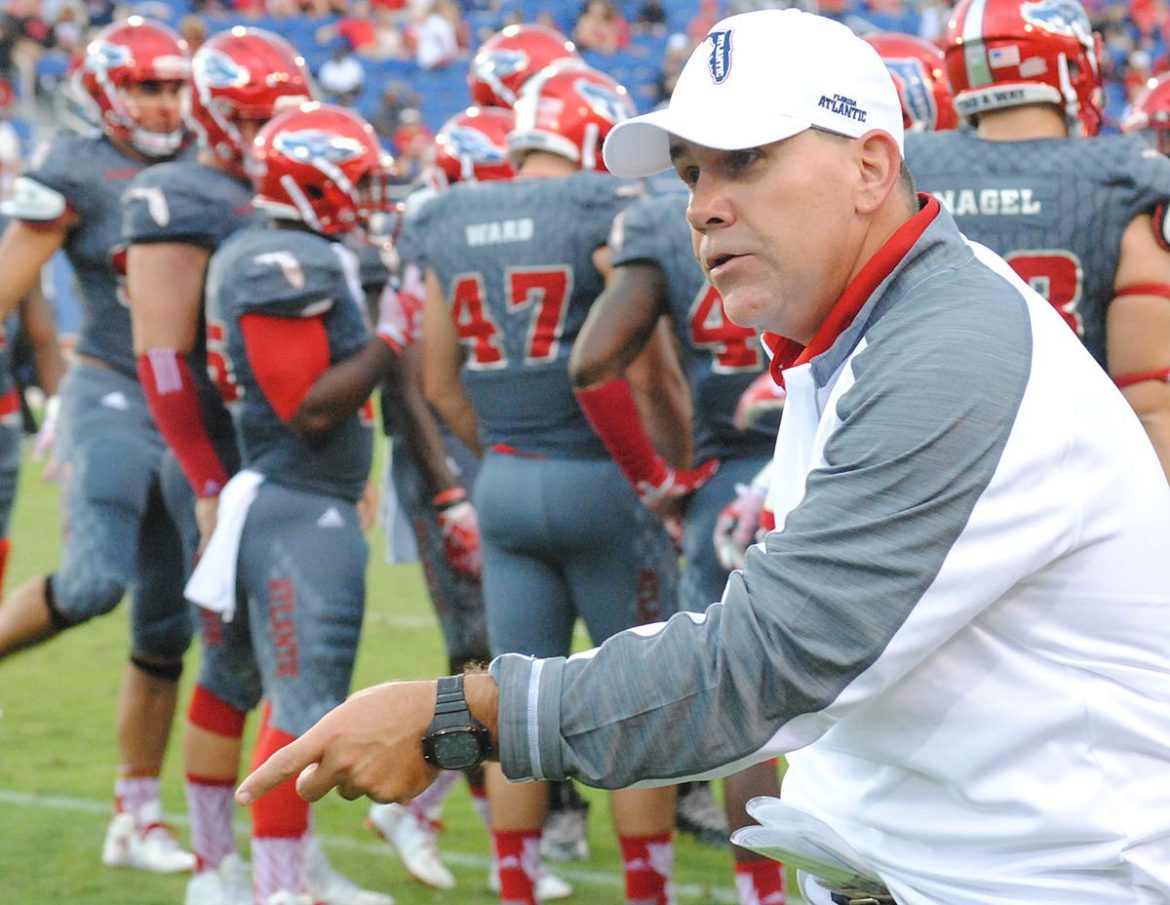 BOCA RATON – Anyone wishing to understand the futility that has been FAU football over the past few years need look no further than the games against Saturday’s opponent.

In the only two meetings between Rice and FAU the football gods haven’t exactly taken the Owls hailing from Boca Raton under their wings. Though, for that matter, FAU hasn’t helped itself much.

Looking for its second win of the season and a 2-0 record in conference play last season, FAU took a 26-14 lead against Rice with 9 minutes remaining. Then the weather delay came, shocking FAU into submission and sending the season into a downward trajectory from which Florida Atlantic couldn’t recover.

Rice returned from the locker room invigorated, scoring 13 points on three possessions to steal a game FAU had seemingly locked up.

“That was a tough one,” defensive coordinator Roc Bellantoni said. “We watched it the other day. We played the last 13 minutes about 40 snaps or 38 snaps. It was tough to watch.”

FAU’s recent late-game problems trace back to a game against Rice – but not that one. In 2013, the year before current head coach Charlie Partridge arrived in Boca Raton, FAU imprudently asked backup quarterback Greg Hankerson to keep throwing the ball despite a late 14-6 lead.

The result? Hankerson dropped the ball once while scrambling inside his own 10, which Rice would convert into a touchdown. Hankerson would then throw two more interceptions. Three turnovers in the final five minutes prevented FAU from its first-ever Conference USA win.

Three seasons, and one regime change, later young and injury-riddled FAU is eight games into its season and once again heads to Rice looking for its first C-USA win of the season.

FAU still confuses many with play calls, can’t hold leads and is in dire need of proof that the program is heading in the right direction.

All navigated the mildewed swamp of bewilderment that FAU football has become in large part because FAU sits in or near the bottom 10 in all four of the previous categories.

In this case, statistics haven’t lied. The 1-7 FAU Owls are not playing good football. Those statistics tell the same story about 1-7 Rice, which, like FAU, has yet to beat an FBS opponent.

In Rice, Partridge sees a foe similar to his Owls.

“Rice is one of the youngest teams in the nation,” he said. “You see mistakes of youth on their end.”

Coming off an embarrassing 52-3 homecoming loss to Western Kentucky that followed a bye week, Saturday’s game in Houston represents FAU’s best chance in its remaining four games to earn a victory.

It’s also the latest opportunity to reverse an ignominious trend that began in the Owl Bowl some three years ago when FAU first showed it could be one of the best teams in the nation – for 50-or-so minutes, anyway.