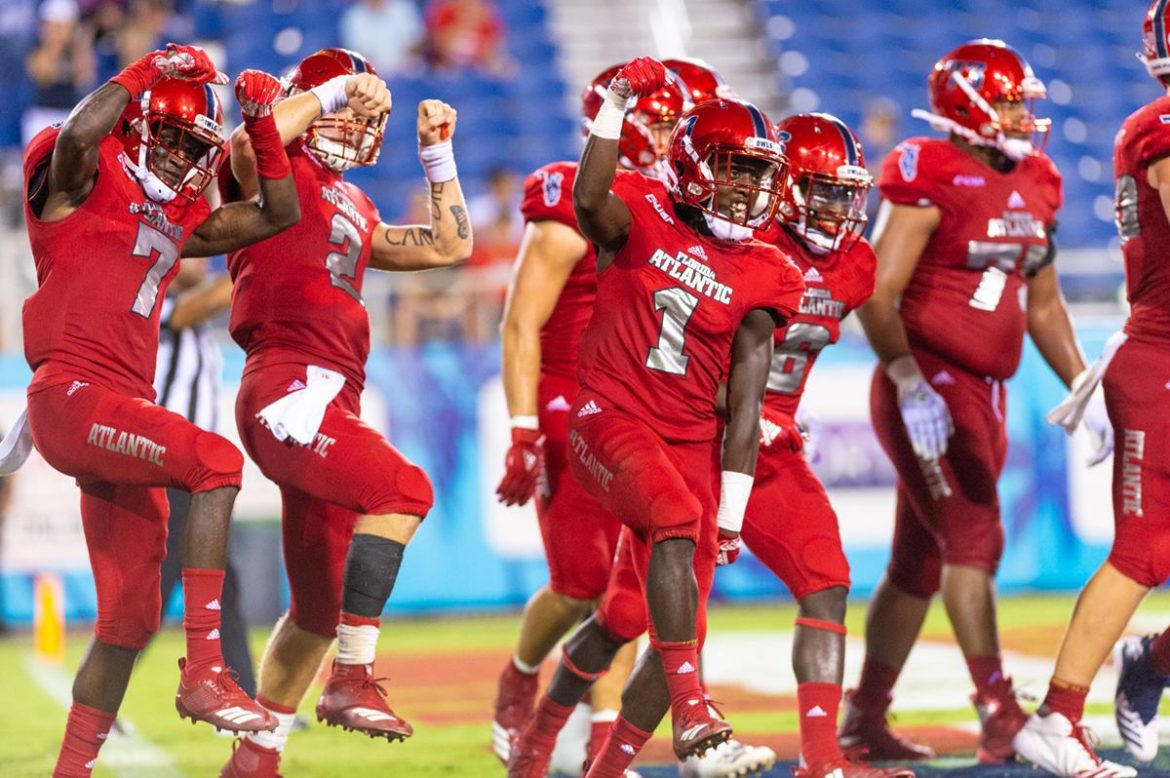 Going for a Ride
FAU WR Willie Wright and the Owls are revving up their imaginary motor bikes and popping wheelies, hoping to ride all the way to a C-USA title.

BOCA RATON – Willie Wright has a good reason for preferring his invisible, make believe motorcycle over the real thing he once rode.

“When I was young I did until I fell off and didn’t get back on,” Wright said. “I think I was doing something wild out of control and I almost couldn’t play football no more, so that’s why I didn’t get back on.”

That didn’t stop Wright from from pantomime the revving the motor of an imaginary motorcycle and popping a wheelie as a means of celebrating a play and firing up the offense during a practice a couple week’s ago.

It didn’t take long for his teammates to join the bike life.

“That was something we were just doing in practice and game time came – I think we were running out of the tunnel – I just did it and I saw everybody else do it,” Wright said. “I guess we started making it a trend.”

The Owls revved their motorcycles when they took the field against ODU. Revved them again following touchdowns. More revs followed big defensive hits or stops. The Owls didn’t stop popping wheelies until they’d raced past the Monarchs 52-33.

“That’s real fun,” running back Devin Singletary said. “Where I grew up at I saw a lot of people ride dirt bikes. I rode dirt bikes growing up. I guess it’s real fun to kind of have a dance going on with it.”

Offensive linemen, however, have yet to jump on the bike.

“Personally I don’t think we’ve got enough gas yet,” right tackle Brandon Walton said. “We need to go get an oil change or something. We’ll definitely try it next Saturday.”

That would put Walton on an imaginary bike in the hills of West Virginia. The Owls launch the second half of their season on Saturday at Marshall (2:30 p.m./CBSSN on Facebook), perhaps the most recognizable team in Conference USA.

“You already know about the tradition regardless of whatever conference you played in,” said guard Antonio Riles, who transferred from Florida to FAU this summer. “You know what Marshall is. Everyone’s seen the movie (We Are Marshall) when we were little kids. It’s a very tough defense. They’re very physical guys up front and they’re going to let you know. They are some big guys up front.”

“This is a very talented team. A very good team. A team that’s won a lot of games for a lot of years,” FAU coach Lane Kiffin said of Marshall. “An established program. No disrespect to anyone else – I don’t know all the stats and how long people have been in this conference – probably the biggest-name program for draft picks and winning games and stuff.”

Complicating matters for FAU is that the Owls will be trying to stop a suddenly rolling Thundering Herd rushing attack without the services of linebacker Azeez Al-Shaair. The preseason Conference USA Defensive Player of the Year tore his ACL during Tuesday’s practice and is expected to miss the remainder of the season.

FAU is expected to use a combination of Andrew Soroh, Khantrell Burden and Hosea Barnwell to replace Al-Shaair, the Owls’ defensive leader and second-leading tackler on the season.

“When adversity hits, you’ve got to just come back harder,” said safety Jalen Young, himself working his way back from an early season injury.”

Going for a Ride
FAU WR Willie Wright and the Owls are revving up their imaginary motor bikes and popping wheelies, hoping to ride all the way to a C-USA title.
was last modified: October 19th, 2018 by Chuck King
October 19, 2018 0 comment
1 Facebook Twitter Google + Pinterest