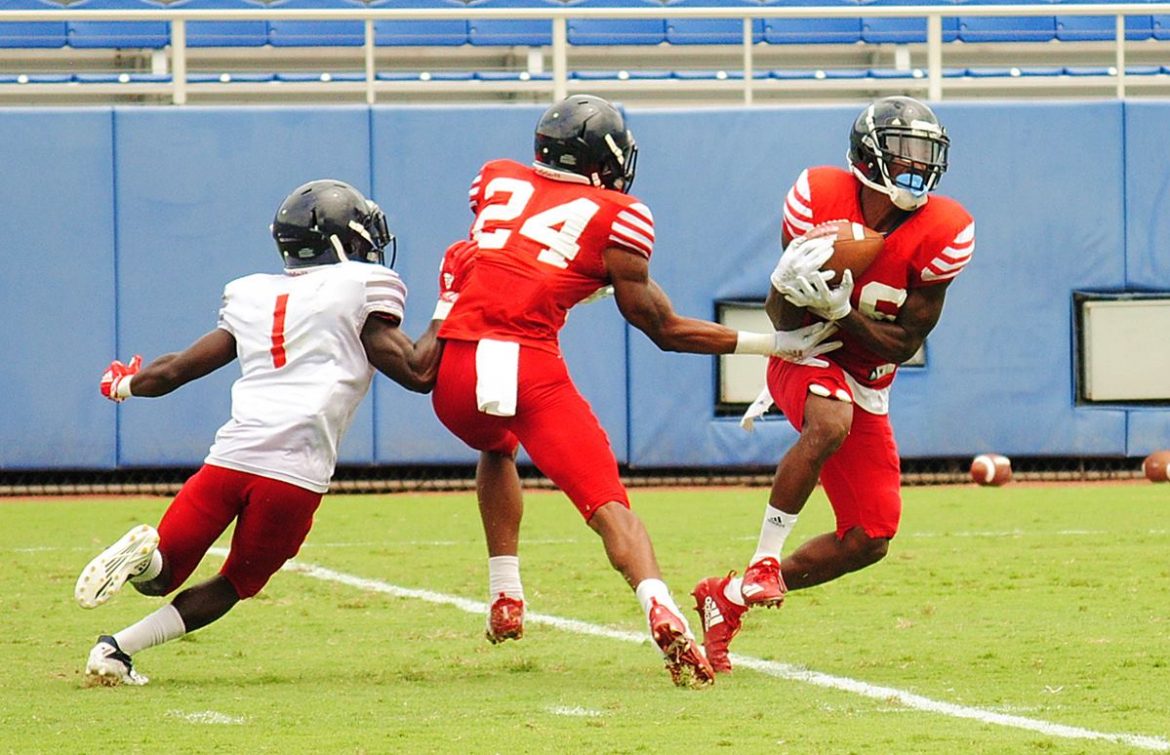 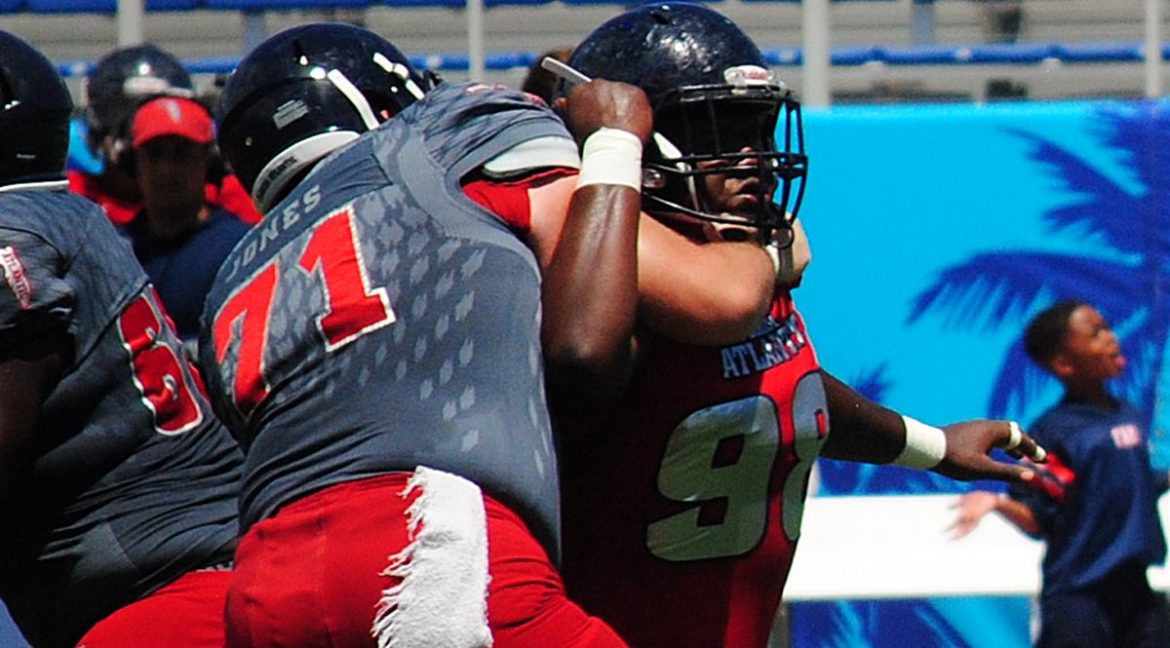 D-Line Shuffle
Cameron, Horton and Southall make the most of their second chances, creating a dominating D-Line for FAU this spring.

BOCA RATON – After playing sparingly over the last three seasons, Damian Horton needed a fresh start to his FAU career.

He got exactly that with first-year defensive coordinator Glenn Spencer. And Horton – along with some of his fellow D-linemen – excelled his renewed opportunity.

No past depth charts, production or player-coach relationships are dictating how FAU is allotting snaps; they’re now being determined by the day, based on merit alone. Horton, a longtime backup who worked his way into the second and – sometimes – first teams under Spencer could attest to that.

And he isn’t the only one taking advantage of that coaching philosophy.

Charles Cameron was a star this spring, his freakishly-quick feet getting him into the backfield to wreck plays before they could even develop. He flashed that same ability last spring, but it didn’t translate into the season. The Mississippi native hardly played in 2018 after announcing on Twitter he was quitting the team last August, only to return days later.

FAU coach Lane Kiffin often says JUCO transfers like Cameron often take a year to get acclimated to Division 1 football. So, under that timeline, Cameron’s in line to be a big contributor this season.

“Last year I was all about me, and just doing me – not being a team player,” Cameron said. “I feel like I’m more of a team player this year.”

Another 2018 JUCO transfer, Marcel Southall, underwent a redemption of his own. The former Texas defensive tackle cut 36 pounds to play defensive end, the position where he starred as a high schooler.

SPRING GRADE: A. FAU’s defensive line was so disruptive it was hard to properly evaluate its offense. The unit played with a relentless motor, chasing down ball-carriers both in the backfield and up the field. Getting after the quarterback and stopping the run was a problem for FAU last season; if this spring was any indication, that trend should not continue.

SPRING STANDOUT: Cameron. Having an interior D-lineman that can push the pocket in the pass game and attract double teams in the run game can make the rest of the defense look exponentially better. FAU seems to have that guy in Cameron. His quickness complementing defensive tackle Noah Jefferson’s power will torment opposing offensive lines next season.

SPRING DISAPPOINTMENT: Not seeing Tim Bonner in the LEO role. In Spencer’s defense, one of the D-ends occasionally moves to inside linebacker to switch from a four- to a three-man look up front without having to substitute. But only Leighton McCarthy, David Belvin and Tre Jackson did so. Bonner is FAU’s most athletically-gifted defensive lineman from a size-speed standpoint, so it would have been interesting to see him play off the ball and in space.

SPRING SURPRISE: Jalen Joyner’s substantial improvement. The redshirt-freshman was dominant in stretches this spring, making a strong case to be in FAU’s interior rotation come the fall. His speed off the snap is outstanding for a player of his size, rivaled by only Cameron among FAU’s interior rushers.

D-Line Shuffle
Cameron, Horton and Southall make the most of their second chances, creating a dominating D-Line for FAU this spring.
was last modified: May 10th, 2019 by Wajih Al Baroudi
May 10, 2019 0 comment
1 Facebook Twitter Google + Pinterest 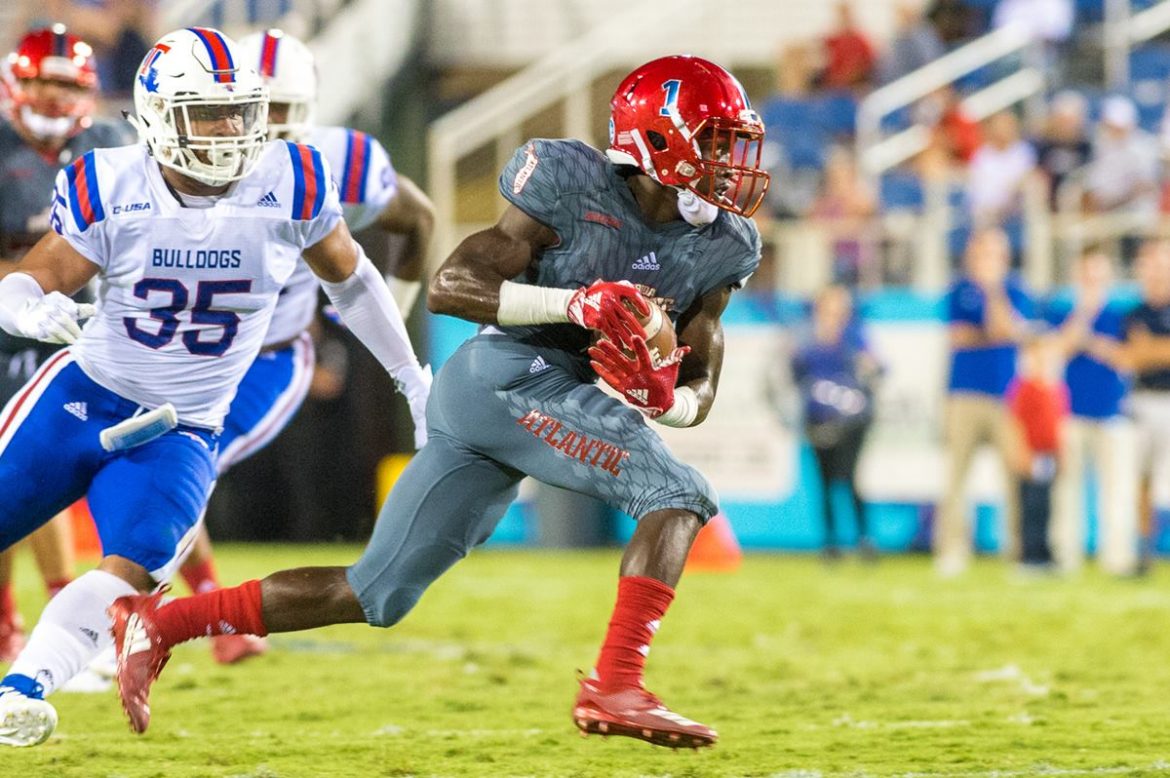 Under Cover
A lack of overall depth compouned by injuries complicated the spring grading process for the FAU wide receiving unit.
was last modified: May 6th, 2019 by Chuck King
May 6, 2019 0 comment
1 Facebook Twitter Google + Pinterest