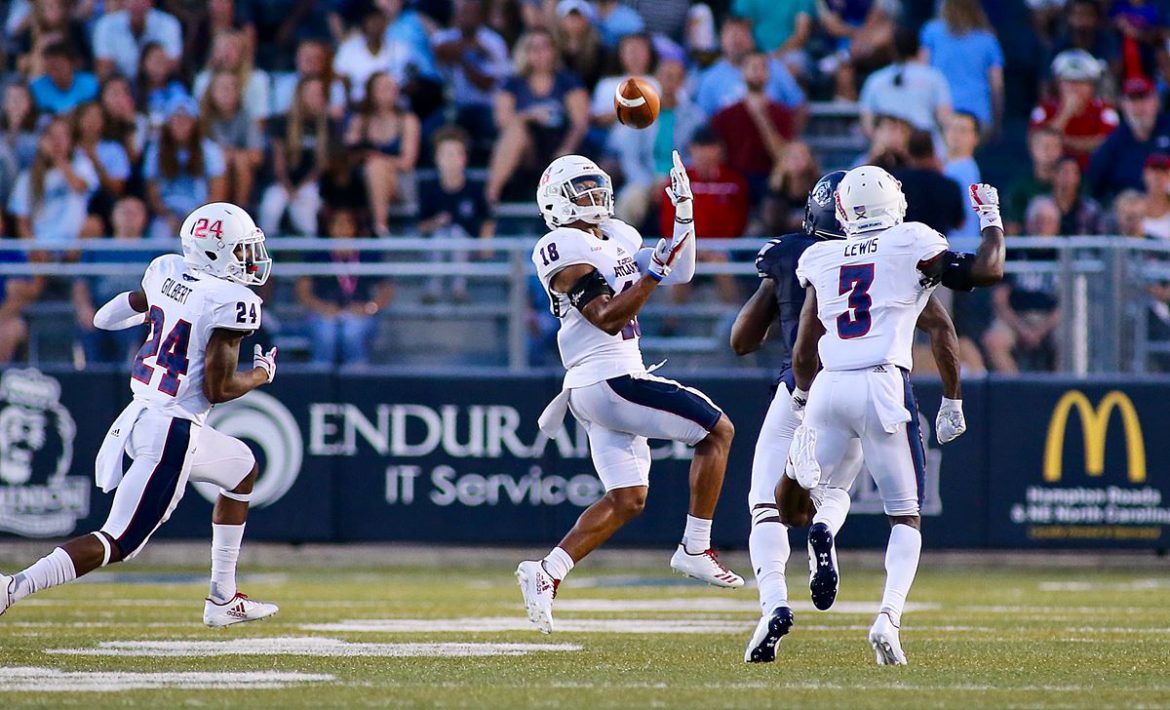 Thinking Turnovers
Athleticism in the secondary and an emphasis in practices on creating turnovers make the Owls' defense one of the best in the nation at taking the ball away.

BOCA RATON – At some point during August as their teams prepared for season openers, it’s possible – likely, even – that every coach in the nation spoke of wanting to aggressively create more turnovers.

For FAU this season, the philosophy became more than talk.

“Every day we go out there and we work turnover drills, constantly beating it into your head,” linebacker Azeez Al-Shaair said. “You kind of have no choice. If you’re not attacking the ball you’re getting basically yelled at for not doing it. It’s something that becomes your culture and you get used to doing it.”

And doing it well.

Through eight games the Owls already have created more turnovers, 20, than they did all of last season.

Winning the turnover battle is translating into FAU victories. Look no further than Saturday’s 42-28 victory over the two-time defending Conference USA champs, where the Owls took the ball away four times and only gave it away once.

“That game was a good example of it,” FAU coach Lane Kiffin said. “We didn’t play very well. They kind of played lights out. They had a ton of first downs – I don’t remember what it was, more than us – but at the end of the day we got the ball four times, they got it once. That’s three different times, three more possessions.”

A more aggressive defensive scheme is one reason the Owls are creating more turnovers. Stellar secondary play is another.

Cornerbacks Chris Tooley, Shelton Lewis and Raekwon Williams combined for eight of the Owls’ 14 interceptions. Safeties Jalen Young, Ocie Rose and Soroh have four between them. And nickel back Herb Miller notched his first of the season on Saturday in what was the best performance of his career.

“Interceptions a lot of times is two things,” Kiffin said. “One is just recruiting. Guys have ball skills. Guys make plays. That’s why the same coaches coach two different years, one year to the next, and one year have a lot more [interceptions] than the other because they lose some guys. That’s a lot about natural ball skills and seeing the ball and playing the ball. Obviously part of it is scheme, too. I guess the third part, the third would be emphasis, but emphasis is really more about offense and creating fumbles than the actual interceptions.”

The emphasis on creating fumbles can be seen in a drill the Owls run during every practice after stretching, one where defensive players run alongside a ball carrier and actively try to pull the ball out of the hands of an offensive player several times before the carrier completes 20 yards.

The turnover focus doesn’t fade upon completion of the drill. Throughout practice coaches remind defensive players to take the ball away.

“It’s just a different mindset,” linebacker Kris Harris said. “It’s part of our DNA now, something that’s embedded in us every day. Every practice, every play, we’re always thinking, Get the ball, Take the ball, Get the ball back.”

FAU’s 14 interceptions already ties for the fifth most in a single season by an Owls’ team. They need five more in the next four, possibly as many six, games to tie the program record of 19 set in 2007.

Closer to the line of scrimmage, FAU would still like to see an increase in fumble recoveries on Friday against a Marshall squad that’s only fumbled eight times all season – losing six of them.

“Now we’re working on fumbles, actually taking the ball from their hands,” defensive tackle Jeremiah Taleni said. “That’s going to be our emphasis for this week.”

Thinking Turnovers
Athleticism in the secondary and an emphasis in practices on creating turnovers make the Owls' defense one of the best in the nation at taking the ball away.
was last modified: November 2nd, 2017 by Chuck King
November 2, 2017 0 comment
1 Facebook Twitter Google + Pinterest