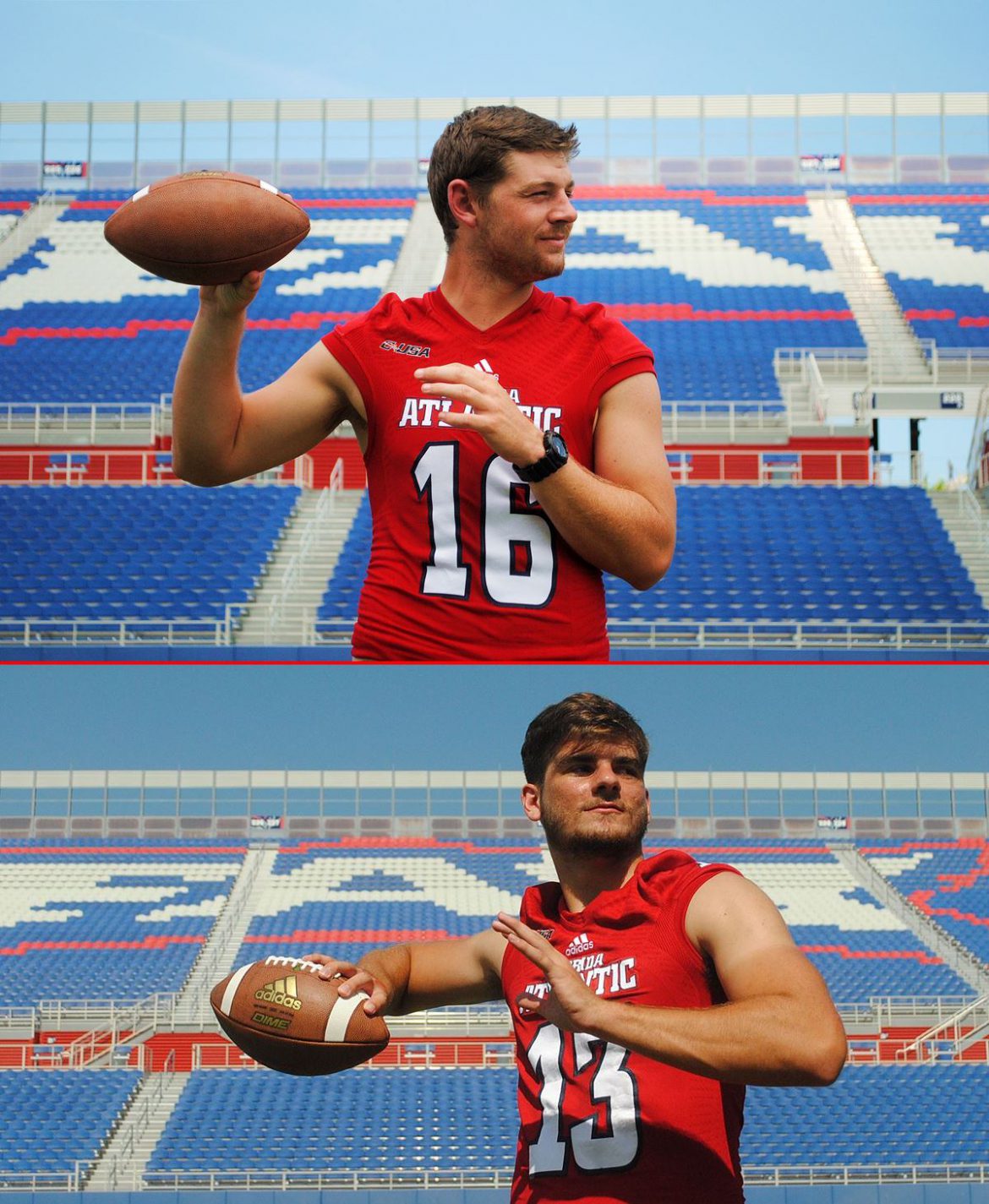 Eager to learn
Daniel Parr and Jason Driskel have battled for more than two weeks in fall camp. Within the next three days they should learn who will be the next FAU starting QB.

BOCA RATON – With fall camp nearly complete FAU quarterbacks Jason Driskel and Daniel Parr are ready to learn which one of them will be behind center when the Owls open the season against Southern Illinois on Sept. 3, but they are not obsessing over it.

“Obviously, being a competitor, I want to know what my role is going to be on the team, but you’ve got to take it one day at a time, one practice at a time, and that’s what I’m trying to do right now,” said Driskel, a redshirt sophomore.

“You definitely want to get a sense of where things stand, but at the same time it doesn’t really matter,” Parr said. “You’ve got to prepare like you are the starter at all times.”

The duo made their comments, Parr at the podium immediately following Driskel, during FAU’s media day on Sunday, an event that coincided with a team meet-and-greet for fans.

Both players said they were largely pleased with their performances in camp. If either had an idea which way they believed the coaches were leaning, they didn’t share it.

Parr went so far as to say he is actively avoiding trying to look for hints at what coach Charlie Partridge and offensive coordinator Travis Trickett are thinking.

“I think that’s probably the worst thing you can do,” he said. “They’re going to put you out at practice wherever they think you need to get reps and do whatever you need to do.”

Driskel played in 10 games last season, starting twice for an injured Quez Johnson. Parr enrolled in January of 2015 as one of the first major recruits landed by the Partridge regime, then used the 2015 as his redshirt year.

Partridge intends to make his decision on the starting quarterback by Thursday, when the Owls officially end camp begin preparation for Southern Illinois.

The Owls’ third-year head coach used Sunday’s media day as a vehicle for announcing that walk-on defensive end Haiden Nagle, defensive back Alfred Ansley and defensive back Anthony Hamilton had been awarded scholarships.

“We were able to reward three players that came through this program the hard way, had to earn everything that they’ve done since they walked in,” Partridge said. “These are three young men that haven’t asked for anything. They just come to work every day and they’ve really earned it.”

“Over the course of last year he has really learned to channel that emotion and always be a positive emotional influence on those around him,” Partridge said of Al-Shaair. “He’s continued to mature at a very, very high rate and has he respect of all  his teammates.”

Eager to learn
Daniel Parr and Jason Driskel have battled for more than two weeks in fall camp. Within the next three days they should learn who will be the next FAU starting QB.
was last modified: August 27th, 2016 by FauOwlAccess
August 27, 2016 0 comment
0 Facebook Twitter Google + Pinterest 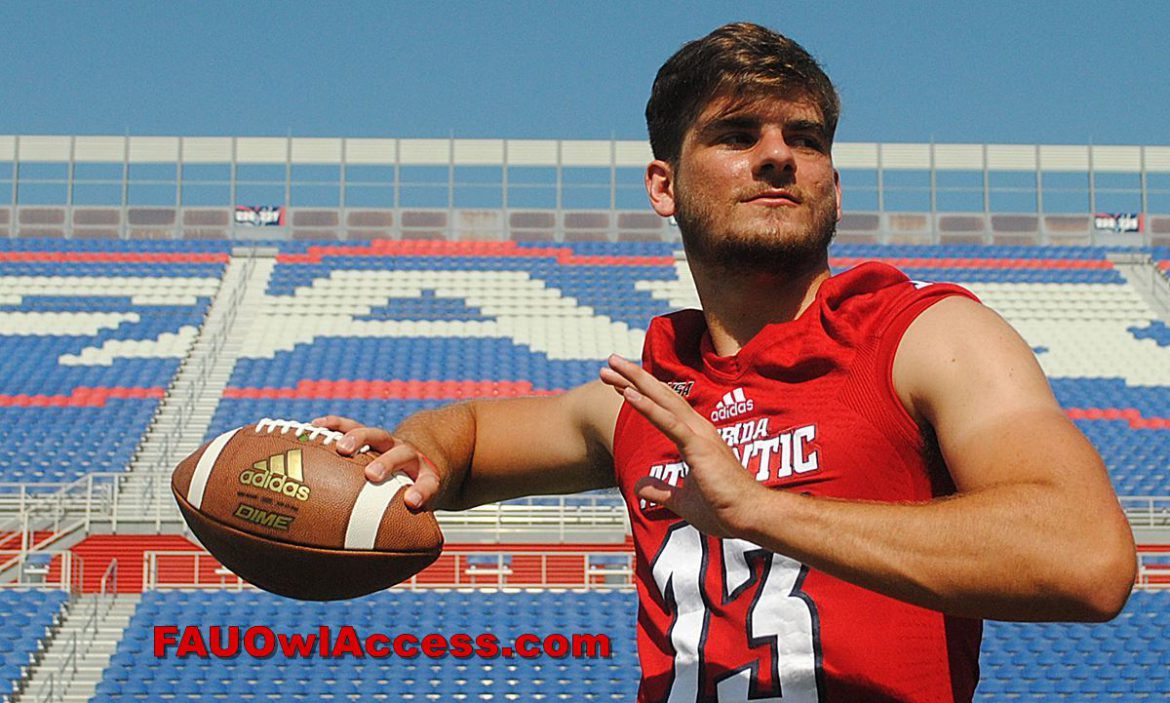 BOCA RATON – If Charlie Partridge has decided who is going to be FAU’s starting quarterback, he isn’t divulging the secret publicly. That announcement, though, is coming soon.

Partridge has a self-imposed deadline of this upcoming week to choose his starter for the Owls’ Sept. 3 season-opener against Southern Illinois.

On Saturday Partridge and his coaches received what will likely be their final decisive evaluation when Owls traveled across campus to Howard Schnellenberger Field for the first time this camp for their final scripted scrimmage.

In the coming days – perhaps as early as Saturday night – Partridge intends to meet with offensive coordinator Travis Trickett to select either redshirt sophomore Jason Driskel or redshirt freshman Daniel Parr to pilot the Owls.

Partridge and Trickett meet every day following practice, with quarterback play being a constant topic.

The Owls made an effort during camp to give both Driskel and Parr equal opportunities with the first team – an effort that continued on Saturday.

Driskel played in 10 games last season, starting two, and used the experience to his advantage during camp, bringing consistency to the position.

On Saturday Driskel led the Owls to the end zone on his final drive of the scrimmage, which culminated with a 7-yard run from true freshman running back Devin Singletary.

Earlier in the scrimmage Driskel delivered what was the best throw of any of the quarterbacks during portion that was open to the media – wedging a 10-yard pass between three defenders for a completion to Nate Terry.

FAU will hold a morning practice on Sunday before reporting to Howard Schnellenberger Field for a meet and greet with fans that will also double as the Owls’ media day.

Players begin classes on Monday and will not practice. They return to the field on Tuesday and Wednesday for what will be the final two practices of what Partridge considers fall camp. On Thursday the Owls begin game preparation for Southern Illinois.

By that time, and probably sooner, FAU will know its starting quarterback.