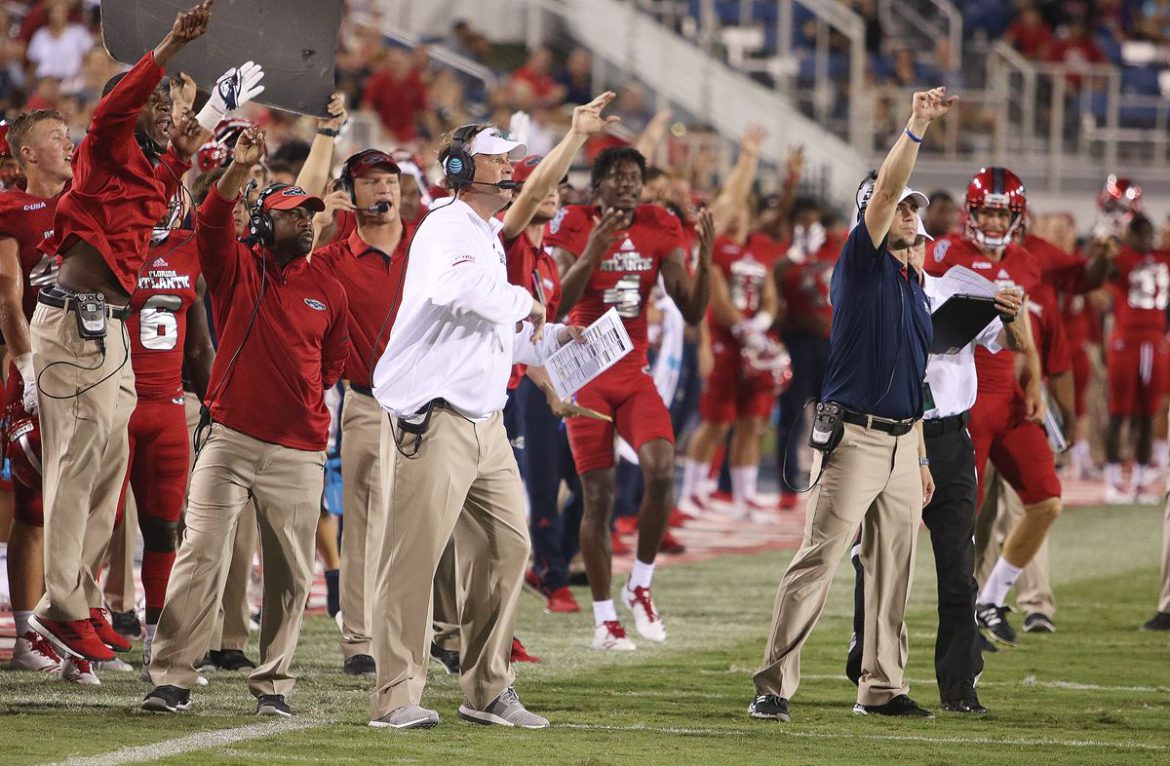 Pursuing Perfection
With a win at Charlotte on Saturday, FAU would complete its first-ever undefeated run through Conference USA play.

BOCA RATON – An FAU team that’s used a revenge-as-motivation approach all season has a different incentive to draw upon for Saturday’s regular-season finale at Charlotte: Perfection.

Winners of seven consecutive games, a win on Saturday would cap a perfect run through Conference USA play.

“It means a lot because it’s special – something that we haven’t done as a program,” linebacker Azeez Al-Shaair said.

Were it not for the perfection potential, it could be easy for the Owls to overlook the 49ers. FAU (8-3, 7-0) has already clinched bowl eligibility and will host the Conference USA title game on Dec. 2 against North Texas.

The Owls might not even need their best effort defeat a Charlotte (1-10, 1-6) team that will be playing its final game of the season on Saturday.

Earlier this week FAU coach Lane Kiffin tried to keep the Owls from getting sucked into a relaxed state.

“You’re winners now,” Kiffin told the team. “Do you want to be a winner or do you want to be an elite champion? That’s what your choice is. You can go through the motions this week and try to get a win or you can really get better, get a win, so you are improving individually and as a team for the following two games after that.”

Of course, if all else fails FAU players can still draw on their desire for revenge. Last season the Owls thought they had beaten the 49ers after Jason Driskel connected with Kamrin Solomon on a Hail Mary pass, only to have the replay official rule that Solomon failed to get a foot down in-bounds.

Charlotte escaped with a 28-23 victory.

Key for the Owls: Contain Charlotte quarterback Hasaan Klugh. For years the Owls struggled mightily against mobile quarterbacks. That hasn’t been the case in recent weeks – which is true progress. Klugh, who can hurt defenses with his arm and his legs, threw three touchdown passes in last year’s game. He’s the most dynamic Charlotte player on offense. Limiting his ability to make big plays will go a long way toward bringing FAU a victory.

Key for the 49ers: Stay in the game. FAU’s fast-paced offense stands to score plenty of points against one of the worst defenses in the nation. The Owls would like to put this game out of reach early, thereby giving them the opportunity to rest some starters ahead of next week’s Conference USA championship game. Charlotte needs to start quickly and withstand FAU’s opening blow,

Shorthanded at End: FAU could be without tight end Harrison Bryant on Saturday. The sophomore who’s emerged as a huge threat in the passing game this season injured an ankle during the Shula Bowl and watched the end of the game while on crutches. He was also absent from the beginning of Wednesday’s practice. Back-up tight end John Raine has been dealing with his own injury issues. Should Raine remain limited, FAU would turn to redshirt senior Dustin Bowens, primarily a run blocker, and D’Anfernee McGriff, who began the season as a wide receiver but did catch a touchdown pass from the tight end position in the Shula Bowl.

Cornered: The tight end position isn’t the only FAU unit thinned by injuries. Since losing Raekwon Williams in the middle of the season, the Owls have been practicing with only four scholarship cornerbacks. One of the walk-ons, junior DaSean Cannon, appears to be climbing the depth chart and could see time with the second-team unit on Saturday. “Without (Williams) it’s been a struggle a little bit,” corner Shelton Lewis said. “We’ve still got some depth with Korel [Smith] and then we’ve got some scout players that stepped up a lot during the season.”

Mr. 2,000?: With 1,524 rushing yards on the season and three games still remaining, FAU running back Devin Singletary has an outside shot of reaching the 2,000-yard mark on the season. Singletary would need to average 158.7 yards over those three games to get there. “I don’t like to too much worry about it,” he said. “I just kind of like to go out and play. Of course, it’s kind of in the back of my mind.”

Coaching Milestone: If FAU defeats Charlotte, Lane Kiffin’s Owls will improve to 9-3 in his first season as coach. Those nine wins would tie Kiffin with his predecessor, Charlie Partridge, for second on FAU’s career coaching win list. Partridge’s teams posted three consecutive 3-9 seasons before the Owls let him go a year ago.