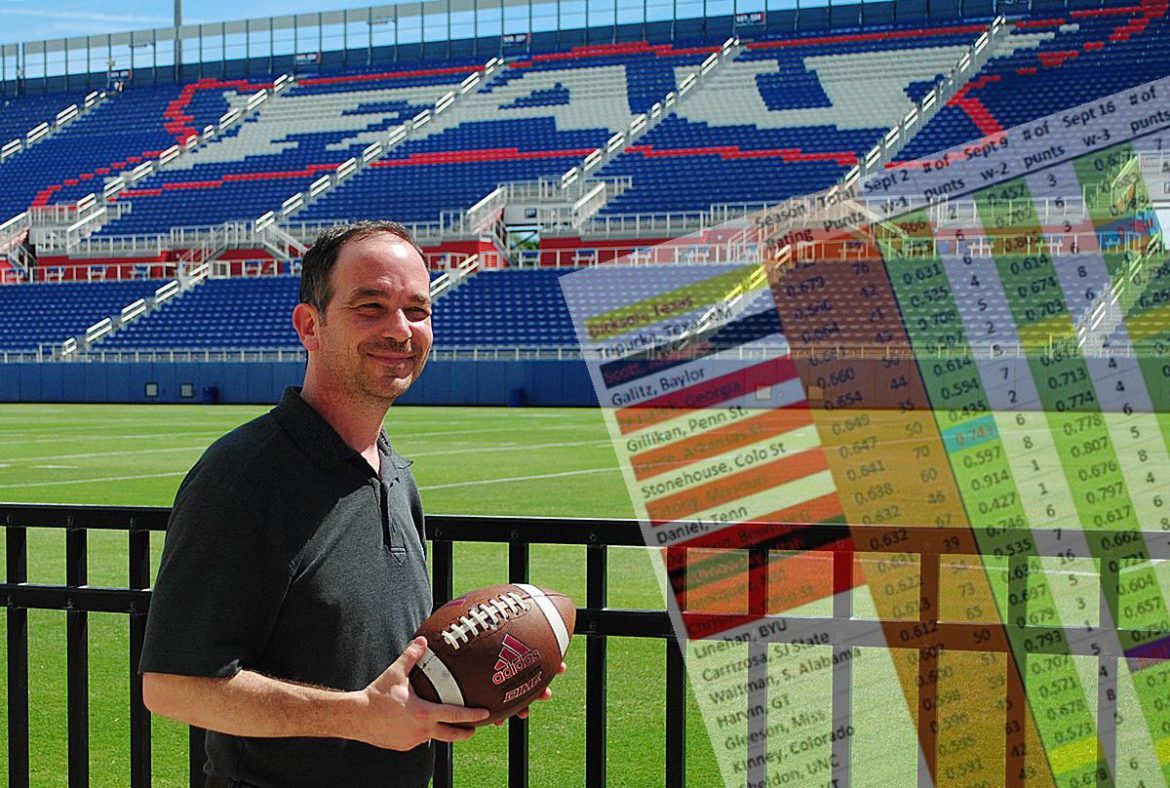 BOCA RATON – Not all 35-yard punts are created equal.

In an era where advanced metrics often appear to be taking over sports, Evan Jaffe constantly found himself wondering why he couldn’t find publicly available data that delves deeper into the effectiveness of punters and kickers.

So Jaffe, a data analyst within FAU’s business school who played soccer as a youth, decided to create his own.

“If I’m watching football, watching the kicker and the punter meant a little bit more to me, I guess,” Jaffe said.

While the official NCAA punting stats primarily rely on average punting yards, Jaffe didn’t believe they told the whole story. Field position, he figured, dictated the success of a punt, so his index factors in the both the spot of the snap and where the receiving team takes possession.

So a 35-yard punt that pins an opponent at the 1 is rated significantly higher than a 35-yarder that goes out of bounds at midfield. It also rates higher than many 45-yard punts.

“The main thing is field position – where you are on the field – and we’re just comparing you to everyone else who kicks in that same part of the field and then we see how good you are relative to everyone else,” Jaffe said.

To create his new measurement tool, Jaffe scoured the box scores of every college football game last season, logging the information from every punt.

“It was for fun,” Jaffe said. “It was something I always wanted to do.”

His punter rating system found that the Ray Guy Award committee made the right choice in selecting Texas’ Michael Dickson as its winner. He also learned that Big 10 and ACC voters chose poorly when they selected Rutgers’ Ryan Anderson and Pitt’s Ryan Winslow, respectively, to their all-conference teams. Looking at their “Boom Rating” both were middle-of-the pack punters when it came to punting success.

According to Jaffe’s metrics, former FAU punter Ryan Rickel’s effectiveness last season was greater than top-level stats indicate. The 42.4 yards Rickel averaged placed him at No. 42 in the NCAA’s rankings. Factoring in field position, Rickel jumped to No. 33 in Jaffe’s Boom Rating.

A couple years prior, Rickel played a role in the most successful FAU punting season ever. In 2015 Dalton Schomp led the nation by averaging 48.0 yards per punt. Schomp certainly boomed punts that year, but one of the reasons his average remained high was that Rickel handled the pooch punting, averaging 35.2 yards per punt.

Even with field position factored, Jaffe’s rankings still rate Schomp’s season performance significantly higher than Rickel’s. Compared to 2017’s punters, Schomp’s Boom Rating of .658 would have made him the sixth most effective punter last season.

As a side project, Jaffe charted every FAU punt since 2010. Schomp’s 2015 season ranked the best. Rickel’s 2017 took second, followed by Mickey Groody’s 2010 campaign. Both Schomp and Groody earned all-conference awards those years.

Jaffe also decided to rate field goal kickers, and a rating for kickoffs could be coming soon. His initial index ranks kickers by assigning points for made kicks, subtracting them for misses, and factoring length and altitude of the stadium where the ball was kicked.

He hopes to include a measurement of “clutchness” of the kick, factoring time remaining and game score at the time of kick into the equation.

Jaffe will continue his rankings in 2018, doing so with the support of the FAU business school. While some subscription services apply advanced metrics to punting and kicking, Jaffe’s will be free to anyone who wants to visit his web site, which will be accessible through FAU’s business school page.

FAU is planning to announce Jaffe’s ranking system next week.

“The same analytics that go into this are business analytics, it’s just applying them to football,” FAU Assistant Dean for Accreditation and International Programs Marc Rhorer said. “It could be how efficient production is, which factors are producing more sales. It’s really the same type of melding, but we’re just applying it to football. People are going to be bored with business analytics but people aren’t bored with football.”

Jaffe and a co-worker will update the standings for both kickers and punters each week.

“It will be my Saturdays and my Sundays,” Jaffe said. “Hopefully not too much of my Mondays.”