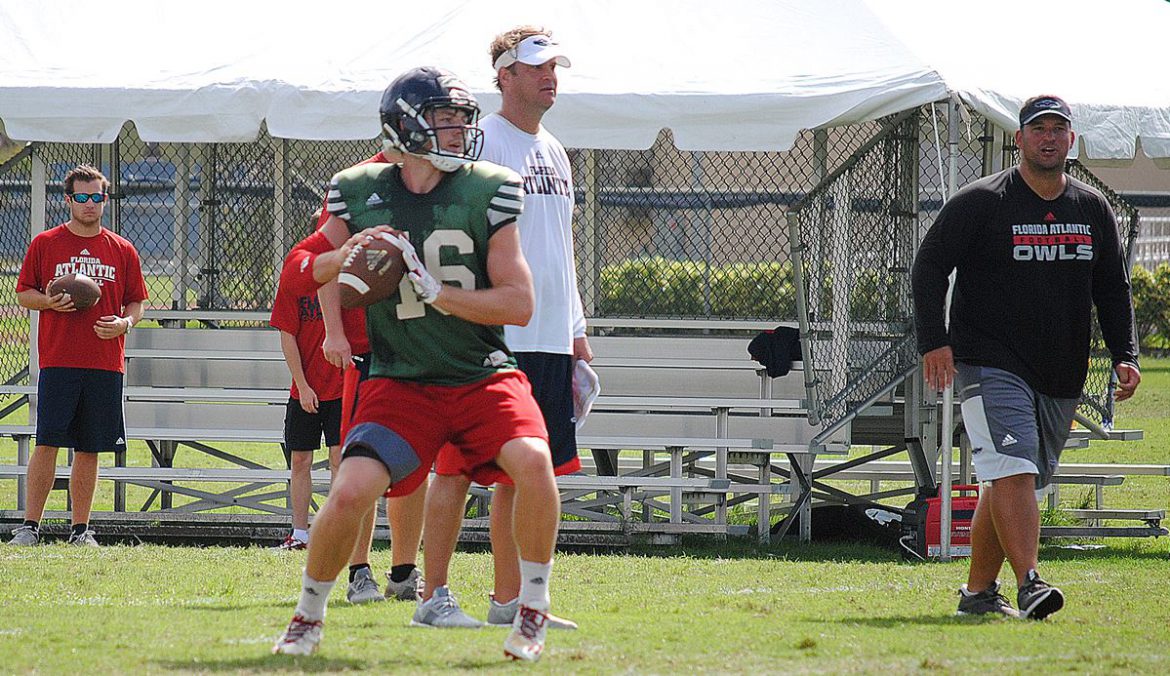 Schedule Adjustment
Lane Kiffin is using a tactic he learned while coaching USC to keep FAU players fresh down the stretch.

BOCA RATON – Lane Kiffin is doing his best to keep FAU players fresh – and he’s using a silver lining learned during his time at USC to do so.

While dealing with the scholarship limitations included in the NCAA sanctions against against the Trojans for infractions that occurred before Kiffin became the head coach, Kiffin found he needed to alter the frequency and intensity of his practices to avoid wearing out the short-handed Trojans.

“We did that a little bit at USC because of the challenges of having the reduced roster with the sanctions,” Kiffin said.

“Maybe that helped me manage players’ bodies better, having less of them.”

FAU is similar to those USC squads in that, unlike Kiffin’s previous stops Alabama as an offensive coordinator or Tennessee as head coach, the Owls lack overall depth on their roster.

As a result, he’s altered the Owls’ practice schedule over the past three weeks to ensure front-line players don’t wear down.

“We’re always monitoring that, our players, probably more than I ever have just based on being a coach longer and not being stubborn and saying, We’re going to practice the same no matter what,” Kiffin said.

Once the season started, the Owls held full practices on Mondays, Tuesdays and Wednesdays; a walk-through on Thursdays, and then an uptempo practice on Fridays.

About three weeks ago, Kiffin began using a lighter foot on the throttle, making Monday practices primarily walk-throughs, too.

“We’re really getting our legs back by the time we practice Tuesday, have two tough days, then get the legs back Thursday, and then start the progression of getting closer to the game – that’s why you go fast on Friday, but you don’t do a lot,” Kiffin said.

Kiffin sees a difference in his Owls since the switch.

“You judge it by watching games and the score, but then also how are your guys playing,” Kiffin said. “Do you look really fast on game day or do you look sluggish? I think we’ve looked really fast the last couple of weeks.”

Players believe the advantages from switching practice routines are both physical and mental.

“You’re still getting all the reps,” linebacker Azeez Al-Shaair said. “We probably get 10 times as many more reps in the walk through than we did in regular practice because we’ll go through one play with five different defensive calls, and then go through another, play five different defensive calls. So I think it really helps a lot – just mentally preparing. We’ve been working all off-season, all season, to be physically ready so I don’t think that’s a problem for us.”

Lewis feels like his body is starting to wear down, so he appreciates the change in practices, noticing the difference in games.

“It’s really good for our legs because in the game, fourth quarter, our legs start to die down a lot,” Tooley said. “At the beginning of the game our legs are not as tired as they would be if we had practices throughout the whole week, so it helps a lot.”

Before the Owls can win the Conference USA title, they must first play Charlotte on Saturday. A win would cap the program’s first-ever undefeated run through conference play.

“We want to be undefeated in the conference,” Kiffin said.