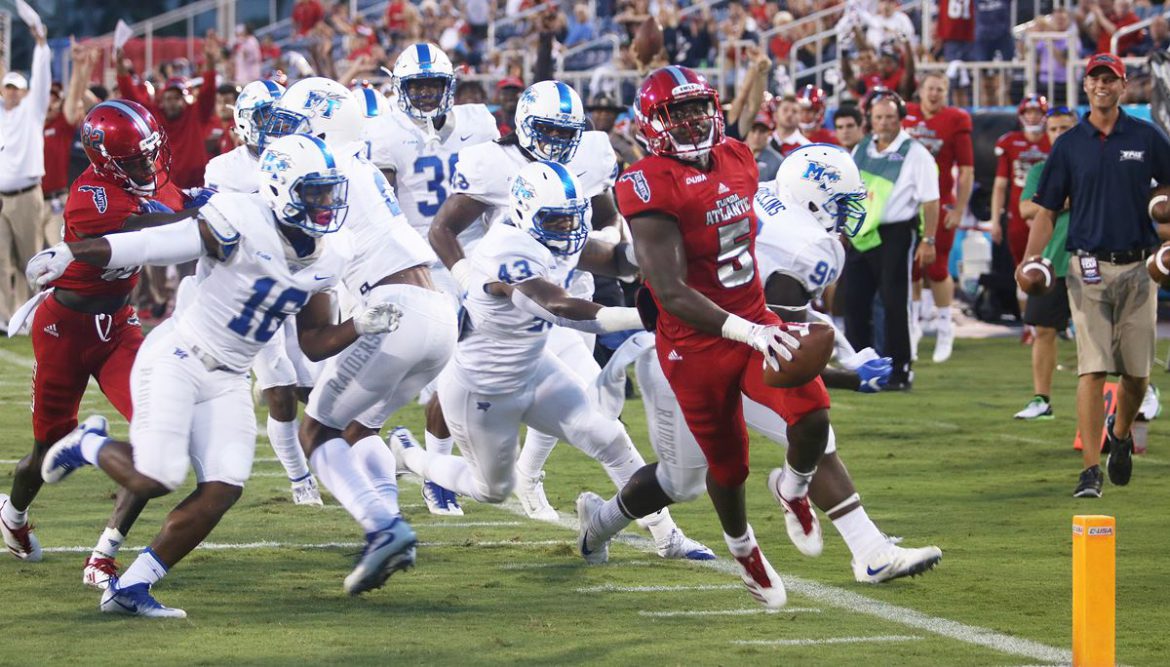 Top 5 FAU RBs
Alfred Morris or Devin Singletary? Choosing the top running back in FAU program history might be the toughest decision in the rankings of the Top 5 players at each position in Florida Atlantic history.

BOCA RATON – The five best running backs in FAU history? That’s not an easy list to create – especially when ranking the Top 2.

For the purposes of this list, we combined tailback and fullback into one position, most notably because – as much as Trey Hendrickson and Trevon Coley will argue – FAU really hasn’t employed a fullback since 2011.

5. Willie Rose (2006-09): Yes, we wanted to ensure fullbacks were recognized in this list, but Rose’s inclusion is no gift. Rose rushed for 972 yards during his career, averaging 4.93 yards per carry, and tallied 687 receiving yards. His 10 career receiving TDs are tied for ninth in FAU history. He led the way for Charles Pierre during those first two bowl seasons, while also serving as Rusty Smith’s personal protector and outlet receiver. Rose signed with Tennessee following his FAU career, though he never made a regular season roster. He edges Doug Parker for this spot. Fullback Aaron Sanchez also deserves recognition.

4. Buddy Howell (2014-17): Injuries and the emergence of a super back limited Howell’s contributions throughout his career, but he still became FAU’s fourth-leading rusher with 2,419 yards. Howell’s 22 rushing touchdowns are fifth most in FAU history, and his 13 rushing touchdowns in 2016 set an FAU single-season record – at least for a little while, anyway. While most can easily recall Devin Singletary’s astounding statistics from 2017, few realize that Howell still rushed for 740 yards and five touchdowns, averaging 6.61 yards per carry as a backup. Howell parlayed his FAU career into a professional one. He’s currently a member of the Miami Dolphins.

3. Charles Pierre (2004-08): Pierre doesn’t receive the accolades heaped upon the Top 2 running backs on this list do, but he’s a Top 3 running back in most every FAU statistical category. His 3,069 yards are currently second-most among Owls and his 23 touchdowns tie for third. Pierre carried the ball as the primary back for the Owls’ first two bowl teams. His 1,014 rushing yards in 2008 are the most in a single season by someone not named Morris or Singletary.

2. Alfred Morris (2007-11): Alfred Morris not the best running back in FAU history? Wow, that’s an agonizing sentence to write. Morris is on FAU football’s Mount Rushmore. No one has rushed for more than the 3,331 yards Morris did in his career. His 27 TDs are second most. He literally carried FAU’s offense during one of the bleakest periods in program history. Unfortunately, we’ll never know how productive Morris would have been in Lane Kiffin’s offense. He’s No. 2 on this list, but that in no way diminishes Morris’ career. He’s an icon.

1. Devin Singeltary (2016-Present): When drawing the final conclusion, it’s impossible to overlook what the back known as “Motor” accomplished last season. Only two players in the history of college football have rushed for more touchdowns in a season than Singletary. His 1,920 rushing yards last season set a program record and were fourth most nationally. He’s a Heisman Trophy dark horse entering the 2018 season. And 2017 wasn’t simply a one-season phenomenon. The 1,021 yards Singletary posted as a freshmen – mostly as a backup – represents the third highest single-season total in program history. Singletary’s 44 touchdowns are nearly 20 more than any other FAU back. Singletary still has two years remaining to gain the 912 yards he needs to pass Morris and become the Owls’ career rushing leader. With his combination of power, elusiveness and vision, we’re betting it happens by November.

Top 5 FAU RBs
Alfred Morris or Devin Singletary? Choosing the top running back in FAU program history might be the toughest decision in the rankings of the Top 5 players at each position in Florida Atlantic history.
was last modified: July 13th, 2018 by Chuck King
June 29, 2018 0 comment
1 Facebook Twitter Google + Pinterest