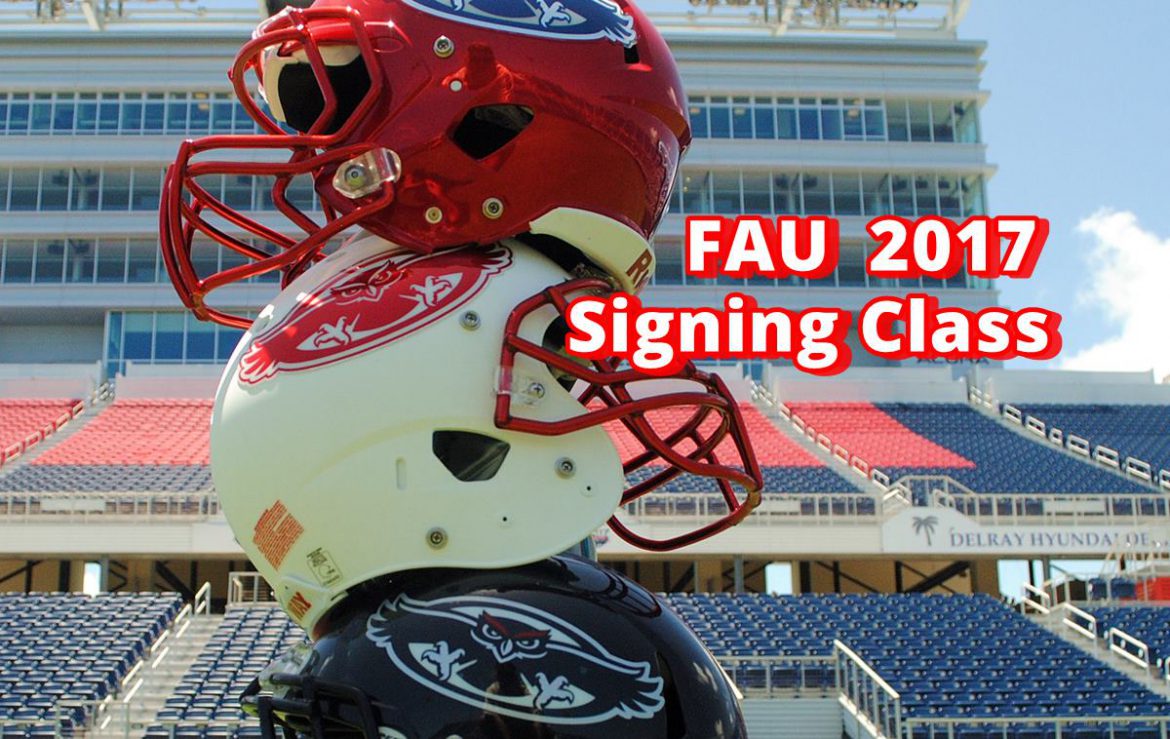 Class Structure
Which FAU signee will make an immediate impact? What was the biggest surprise? We have the answers here.

FAU added 24 players to its football fold during National Signing Day – it’s first under new head coach Lane Kiffin. It’s truly a national class, with players hailing from Florida, Georgia, Alabama, Texas, California and Kansas by way of Ohio. Eight players come from the junior college ranks. Five of the 23 are defensive backs – the most of any position. Here’s our breakdown of some players to watch from the FAU 2017 signing class.

INSTANT IMPACT
DeAndre McNeal, WR, Fullerton CC – Like many junior college players, McNeal doesn’t have a perfect past. He was suspended at Texas before ultimately transferring to Fullerton. McNeal has talent, choosing FAU over UCLA. The Owls’ wideouts under-performed last season. There’s already room for McNeal.

Joey Palmer, OL, Butler CC – Go ahead and write this guy into the Owls’ starting line-up. Previously committed to Louisville, Palmer fills a major position of need right away. He shouldn’t have a problem earning a spot on the Owls’ depleted offensive line.

Ernest Bagner, DE, Riverside CC – Former FAU center Mustafa Johnson is on the coaching staff at Riverside. He loves Bagner’s first step and says he’s more than fast enough to get around the edge. FAU needs to replace Trey Hendrickson. Flip the middle letters in his last name. Gotta love the name “Banger” for a sack artist.

Carson Lydon, LB, Los Angeles Valley College – At least three linebackers who started multiple games last season will miss spring practice. Lydon won’t be there either, but he does possess enough talent to have originally signed with Virginia Tech. He’ll see the field.

MAY TAKE TIME
BJ Etienne, OL, St. Thomas Aquinas – This isn’t a knock on Etienne’s talent. He’s legit. But offensive lineman usually need a year or two to develop in the weight room. Still, with all the injuries at that position, Etienne could make an early splash.

Tyrek Tisdale, RB, Milford Academy – At one point Tisdale was committed to Florida but he ended up going the prep school route. He’s entering a crowded FAU backfield that includes proven ball carriers Buddy Howell and Devin Singletary. A.J. Turman, a Georgia transfer, is also eligible this season. If Tisdale is the real deal, he’ll play. But the Owls can afford to bring him along slowly.

SURPRISE OF THE DAY
Isaac Readon, LB, Booker T. Washington – Readon committed under Partridge but looked to be a casualty of the coaching change until FAU delivered, on Wednesday morning, a National Letter of Intent for him to sign. Readon said on the way to school he prayed that FAU would somehow find a way to give him a chance. No one in this class is happier to be an Owl.

GOT AWAY
Jacob White, RB, Punta-Gorda-Charlotte – Committed to FAU under Partridge and remained a commit all the way until Signing Day, until he chose FIU instead. Loss doesn’t hurt much – as already noted FAU is stacked at running back – but White was the only player to flip away from FAU on Signing Day.

Tre Walker, WR, Narbonne (Calif.) – Would have been an excellent complement to McNeal, but Walker elected to stay in the Golden State and sign with San Jose St. Also considered Boise St.

Marvin Washington, QB, Orlando-Dr. Phillips – One time UCF commit teased FAU with his willingness to come south instead; then elected to play for UConn. Maybe he saw the crowded FAU QB battle and wanted no part of it.

WHERE DOES HE FIT?
Denzel Houston, Ath, Daytona-Mainland – He had a hand in a program-record 124 touchdowns while at Mainland, the school that also gave FAU former RB Trey Rodriguez and current DT Kevin McCrary. He’s likely to play wide receiver at FAU. He’s fast enough that Kiffin and Kendal Briles should be able to find ways to make use of him. The question is, how?

Chase Lasater, FB/LB, Jacksonville-Trinity Christian – Most schools wanted Lasater as a fullback. FAU doesn’t have a true fullback, though tight ends John Raine and Harrison Bryant can play there. Lasater may have a direct path to playing time depending on how much Briles’ offense leans on the position. And with all the injuries at linebacker, maybe he’d be more useful on defense.

Willie Wright, WR, Jacksonville-Raines – He’s small, quick and elusive. If he makes plays, Wright could be the prototypical slot receiver. Or he may be a special teams standout. Will be interesting to see his development.

NATIONAL PROGRAM
Fourteen players – that’s more than half of the class – played this past season at schools outside the state of Florida. FAU usually recruits South Florida heavily, but this class only contains four players from Broward County, one from Miami-Dade County and zero from Palm Beach County or the Treasure Coast. With most of Kiffin’s newly-assembled staff coming from schools outside the Sunshine State, they didn’t have much time to create new relationships with South Florida high school coaches. FAU did sign three players from the Jacksonville area and another from Daytona-Beach Mainland, where current FAU linebackers coach Keynodo Hudson was once the head coach.

ALREADY HERE
DeAndre Johnson, QB, East Mississppi CC – Quarterback started his career at FSU but was kicked out of school after video surfaced of him punching a girl in a bar. Transferred to East Mississippi where he enjoyed a stellar year. Says he has learned from the mistake. Likely opening game starter for FAU.

Quran Hafiz, DB, Jacksonville-Sandalwood – He quietly enrolled at FAU, but until today FAU wouldn’t officially admit he was with the football team. He has a yet undisclosed off-the-field issue that makes some wonder whether he will ever play a down for FAU.

Class Structure
Which FAU signee will make an immediate impact? What was the biggest surprise? We have the answers here.
was last modified: February 2nd, 2017 by Chuck King
February 1, 2017 0 comment
1 Facebook Twitter Google + Pinterest