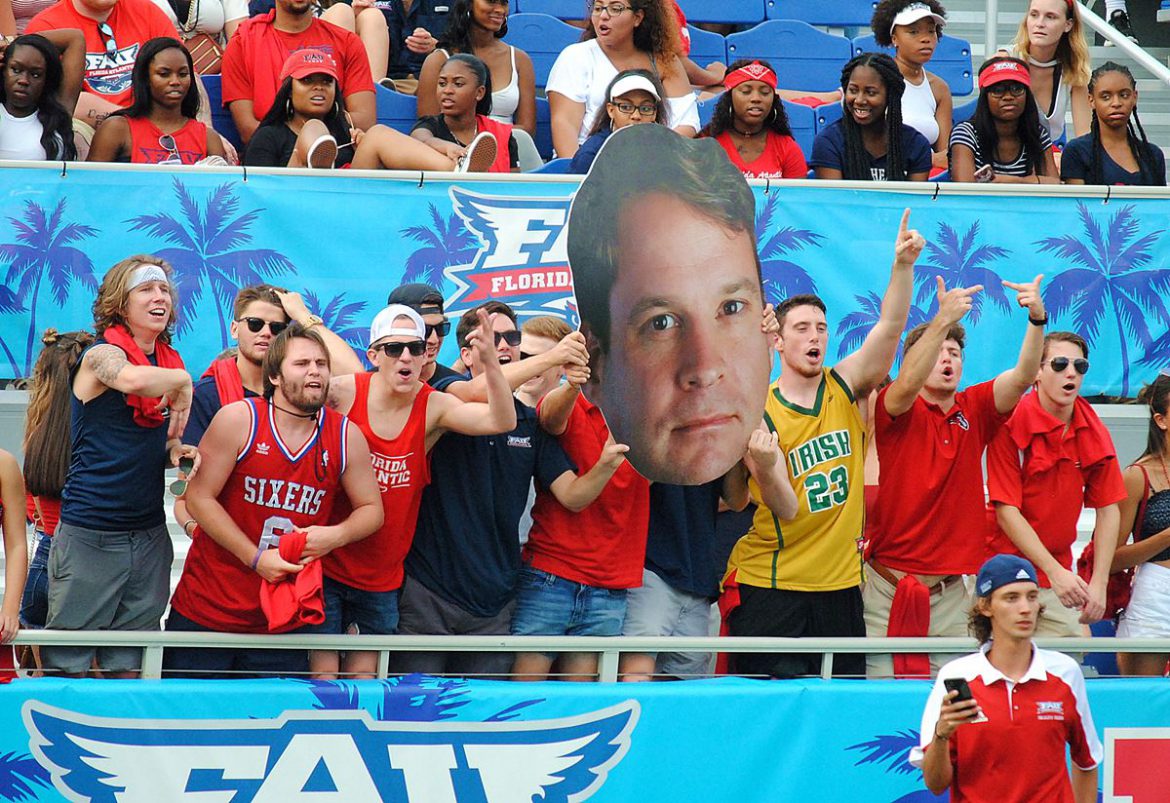 Premium Seating
The FAU football student section is moving from the end zone to the visitors sideline, giving Owl students some of the best seats at Howard Schnellenberger Field.

BOCA RATON – FAU’s student section is on the move.

In a decision ratified by the Board of Trustees on Tuesday, FAU’s athletic department agreed to move the student section for FAU football games from the closed end zone to behind the visitors bench in exchange for raising the students athletic fee by $2 per credit hour.

The move will give the students some of the best seats in the house.

“We think seating the students at the 50-yard line, giving them great seats, they are very excited about it,” FAU athletic director Brian White said. “It’s something that they wanted and it’s something that I think will be good for FAU.”

Along with the move, FAU is doubling the overall student ticket allotment to 10,000. FAU didn’t average the 5,000 student mark last season, but did exceed that limit on a couple occasions.

“For our students to be on the side that the television cameras will be facing, especially as we increase our student attendance, will be a very positive thing,” Brian White said.

White said a minimal amount of season ticket holders will be displaced by the move. Those affected will be offered similar seats on the home side of the field, but will pay the same price over the next five years as they had been paying to be on the visitors side, which is about half price.

The move will place FAU students, including the band, in close proximity to the fielder, but closer proximity to visiting players.

“If we need to add security then we absolutely will,” White said.

“Whatever we can do to steer more students to games has been a huge focus for us,” White said. “This is just another step in that.”

The move is the second for FAU’s student section since the opening of Howard Schnellenberger Field in 2011. Originally the students sat in the south end zone. They moved to the opposing end zone, in part, so they wouldn’t have to turn around to see the video board, which sits above the south bleachers.

As part of the deal, which raises student athletic fees from $17.27 to $19.27 per credit hour, student government gets the use of a luxury box for each game.

The athletic department will use funds generated by the increase to defray costs associated with the 2014 move from Sun Belt Conference to Conference USA, including C-USA initiation fees, membership fees, video streaming requirements and increased travel budgets.

“Filling the stadium is as critical as anything we are going to do and we think this is a really good step towards that goal, a good step toward encouraging more student attendance and I think the student government has done a great job advocating for the student body and what they want,” White said. “I think that’s been a very positive thing for all of us.”