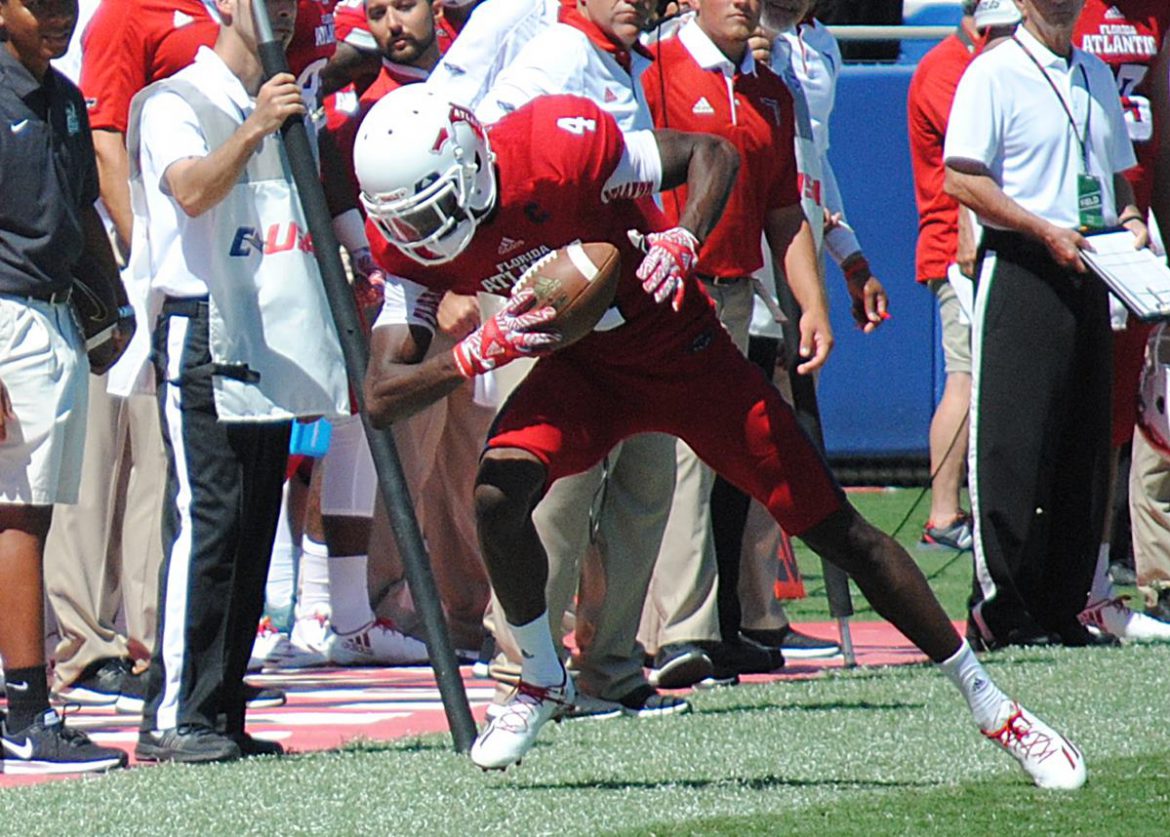 Calling Foul
Probable cause affidavit alleges that a fight at a banquet hall over a year-old basketball foul call landed two people to the hospital and led to the arrest of FAU WR Kalib Woods.

BOCA RATON – The alleged fight that ultimately led to the arrest of FAU wide receiver Kalib Woods appears to stem from an incident on a basketball court about a year prior, according to the Palm Beach County County Sheriff’s Office probable cause affidavit.

The alleged incident, which according to the affidavit occurred at The Venue banquet hall in suburban Boca Raton, landed two people in the hospital, one with a broken jaw and another with internal bleeding.

Woods made his first court appearance on Wednesday and according to court documents his mother and brother were present. Woods posted $50,000 bond but was still in Palm Beach County jail on Thursday morning awaiting the application of a monitoring device.

FAU indefinitely suspended Woods from the football team, releasing a statement that read: ““We are aware of the matter with Kalib Woods. He was suspended from the team on Tuesday and will remain suspended pending the outcome of the charges.”

The Venue bills itself as “Your Party Address”. Advertisements circulated around that time attempted to draw FAU students to an event at The Venue billed as “We Back 2017: Official Back to School Party.” The event promised DJs, $5 drinks all night, $100 bottles until midnight. The party started at 10 p.m. and ran until 4 a.m, Saturday. Tickets at the door were $15 for women, $20 for men.

The alleged incident occurred during the first major recruiting weekend of new head coach Lane Kiffin’s tenure. Woods, a team captain, has served as a recruit host in the past but it is unclear at this point whether he hosted a recruit on this particular weekend.

According to the affidavit, fellow FAU student Stephan Reese said he and his friend Adrian Muckle were at an off-campus party in West Boca Raton on January 13 when a shirtless Woods, along with several other unidentified people approached.

In the affidavit Reese told police that, “Kalib walked towards Adrian and attempted to punch him.”

Muckle told police, “Stephan and I were together at the event minding our own business when Khaleb (sic) approached me with no t-shirt and said remember all that stuff that you were talking. I turned around and got Stephan’s attention and when I turned around Stephan took a punch intended for myself and I was hit from behind and stomped on by Khaleb as well as others that were involved.”

Reese said that after he pushed Muckle out of the way, Woods punched him in the jaw, knocking him to the ground. At that point, Reese said, Woods and other unknown people began to stomp on him. Venue security eventually broke up the fight, at which point Reese said Muckle drove him to the hospital.

Muckle later noticed blood in his urine and returned to the hospital, where he spent the next five days.

“Stephen advised that Kalib was upset with Adrian over a foul in a basketball game that occurred over a year ago,” the affidavit says.

That incident, according to Muckle, sparked a running point of contention.

“I determined that Khaleb Woods initiated the whole assault because in the past I have received several threats from him in person several times and over social media (Twitter) where he basically states at the next event he seen (sic) me he was going to assault me,. I want to prosecute Khaleb Woods for assault,” Muckle told police.

As part of Wednesday’s judicial instructions, Woods was ordered to stay off social media.

Officer DS Ingram concluded the affidavit by writing “Based on my investigation, Stephan Reese and Adrian Muckle’s statements I find probable cause exists for the arrest of Kalib Woods for felony battery and simple battery.”

Calling Foul
Probable cause affidavit alleges that a fight at a banquet hall over a year-old basketball foul call landed two people to the hospital and led to the arrest of FAU WR Kalib Woods.
was last modified: June 15th, 2017 by FauOwlAccess
June 15, 2017 0 comment
0 Facebook Twitter Google + Pinterest