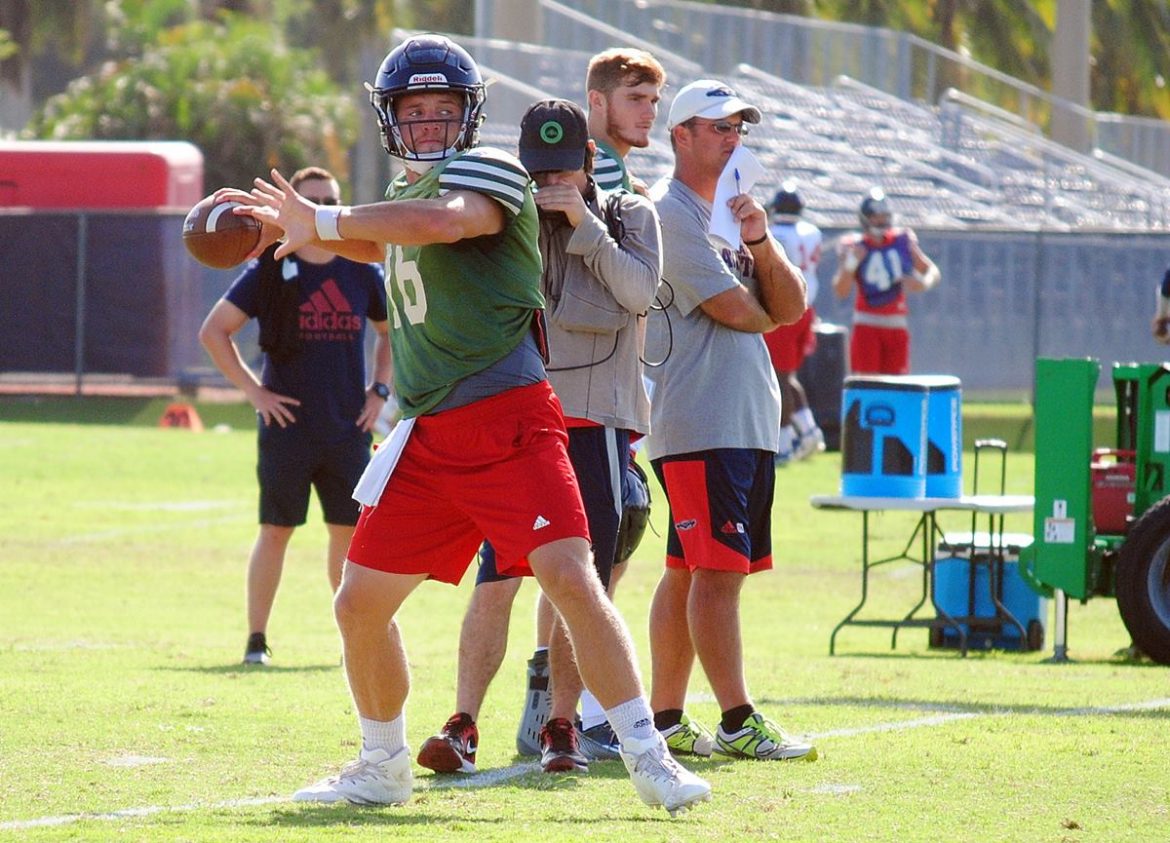 QB Signals?
Saying starter Chris Robison "may still play," FAU coach Lane Kiffin sounds like a coach preparing to have to play a backup QB on Friday vs. La. Tech.

FAU starter Chris Robison injured his left ankle during Saturday’s loss at Marshall, forcing him from the game. Kiffin reiterated his standard line about being “hopeful” Robison would be ready to face Louisiana Tech this week, later noting his concern for the way Robison’s backups have performed this season.

Responding to a question about how he would alter practices, if at all, to prepare a backup quarterback to play, Kiffin gave the following answer:

“It all depends on who your backup is. Is he different than your starter? Is your backup a high mental guy that can take a lot? We would tend in general, especially not even knowing whether – ”

At this point Kiffin paused. He continued, “Chris may still play. We’re kind of just game planning as if we would normally.”

It’s not out of character for Kiffin to attempt to throw some smoke in an attempt confuse opposing coaches as they prepare to face the Owls, but there is no denying that Robison hurt his ankle at Marshall, returned briefly, and played ineffectively upon that return. He watched most of the fourth quarter from the sidelines.

He’s started all seven games this season, but is coming off a four-interception performance in the loss to Marshall.

Robison was present and participating in the portion of Tuesday’s practice open to the media. FAU playing Louisiana Tecon on Friday, rather than Saturday, decreases the time afforded Robison’s ankle to heal.

Rafe Peavey’s been practicing with the second team most of the year and is 5-for-8 during games this season, but he’s also committed the lone turnover among the backups and no drive led by Peavey reached the end zone.

Twice De’Andre Johnson came off the bench to lead the Owls on touchdown drives, scoring one of them himself on a 21-yard run against Bethune Cookman. But he’s only completed three of his seven passes this season, with a long of 11.

Against Marshall, Johnson misfired badly on a relatively easy third down pass into the flat on a play that appeared destined to pick up a first down.

Johnson and Peavey quarterbacked two possessions apiece against Marshall. Neither produced so much as a first down.

“We need those guys to play really well,” Kiffin said. “They’ve not done great when they’ve gone in there. Those are hard circumstances because they are sitting on the bench all game. Whether it’s missing a guy in the flat or not getting the play done right, for two veterans that needs to be their strength.”

Kiffin said on Tuesday that fourth-string quarterback Nick Tronti isn’t an option. Though granted an immediate eligibility waiver by the NCAA, an undisclosed health issue kept the Indiana transfer from participating in most of fall camp, eliminating his opportunity to learn the offense. Tronti did enter the Bethune-Cookman game for two snaps, but he’s primarily been piloting the scout team.

“Nick got here too late and was too far behind, and there just weren’t enough reps to put him in there,” Kiffin said.

FAU offensive linemen say whether it’s Robison, Peavey or Johnson – or some combination of that group – lined up behind center, it doesn’t change their approach to a given play.

“I’ve got faith in our quarterbacks,” guard Antonior Riles said.