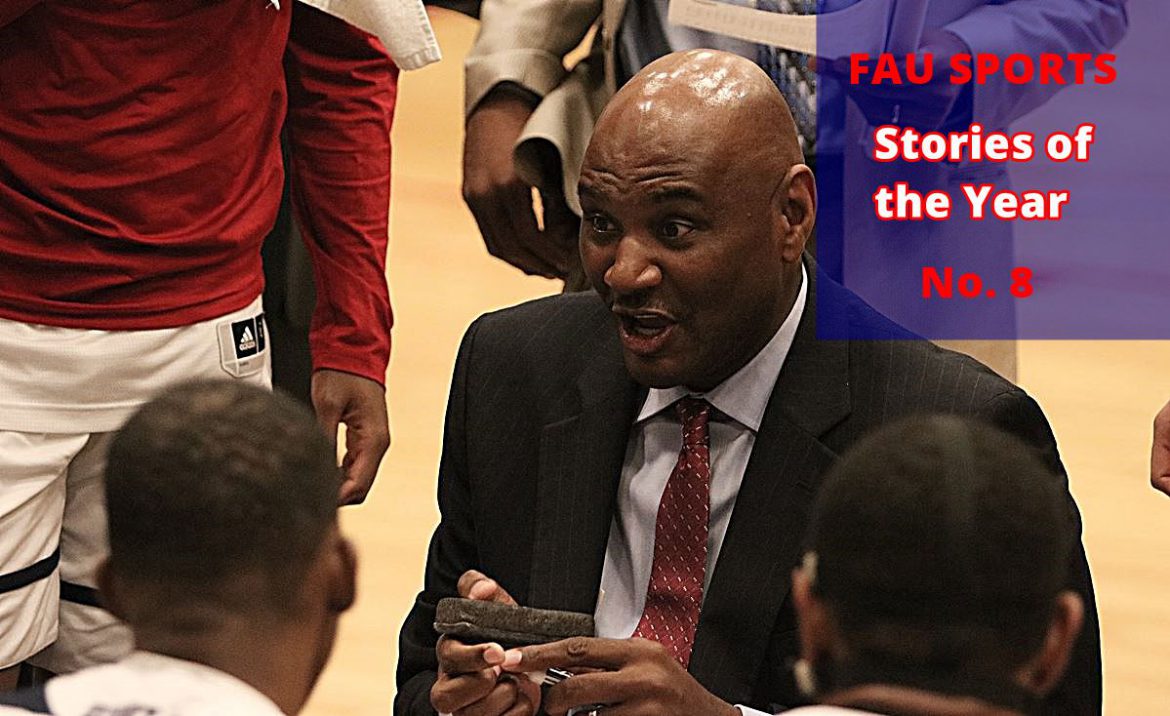 Curry Out, May In
In Brian White's first major decision he fired FAU hoops coach Mike Curry, replacing him with Dusty May, thereby creating the No. 8 FAU story of the year.

Michael Curry may not have wanted to think about it prior to the start of his fourth season as FAU’s basketball coach, but he had to know that if the Owls didn’t show dramatic improvement 2017-18 would be his final season as the Owls’ coach.

Curry promised an uptempo offense fueled by a pressing defense that would excite fans and lead to victories. He quickly learned that FAU simply didn’t have the personnel to play that style of basketball.

The Owls quickly devolved into a defense that retreated inside the the three-point arc and an offense that chewed up the shot clock in search of a decent look at the basket – one that too often never came.

FAU’s final record of 12-19, 6-12 C-USA – the Owls’ best record during Curry’s tenure – wasn’t enough to preserve Curry’s job. Newly hired athletic director Brian White weighed the decision for about a week before telling Curry he wouldn’t be back as FAU’s coach.

Save the Sun Belt regular season title Mike Jarvis led the Owls to in 2010-11, FAU basketball in the new millennium has been mostly a melted malaise sundae topped with apathy and missed three pointers.

That Curry lost his job didn’t come as much of a surprise. In fact, midway through the season, with the Owls playing uninspired basketball in an empty Burrow, it appeared to be a foregone conclusion.

Both White, and more importantly his boss, FAU president Dr. John Kelly, continue to express their desire to build FAU basketball into a Top 25 program.

May’s first task? Reshaping a roster with Division I caliber players. So far, he appears to be making progress. Only four Owls – guard Anthony Adger, and forwards Jailyn Ingram, Simeon Lepichev and Amir Smith – will return from the 2017-18 squad. May’s first recruiting class, likely nine players containing mix of junior college and high school talent, includes the kind of talent he would have signed while the recruiting coordinator at Louisiana Tech, he told OwlAccess.com.

There’s still plenty of work and the Owls certainly won’t begin the season projected to finish in the top half of Conference USA, but with a new regime comes a measure of hope.

And, on a side note, the new palm-tree themed court in The Burrow may indicate that the Owls are willing to increase their marketing support of the program, which could make for a livelier Burrow.

Curry Out, May In
In Brian White's first major decision he fired FAU hoops coach Mike Curry, replacing him with Dusty May, thereby creating the No. 8 FAU story of the year.
was last modified: June 22nd, 2018 by Chuck King
June 13, 2018 0 comment
0 Facebook Twitter Google + Pinterest