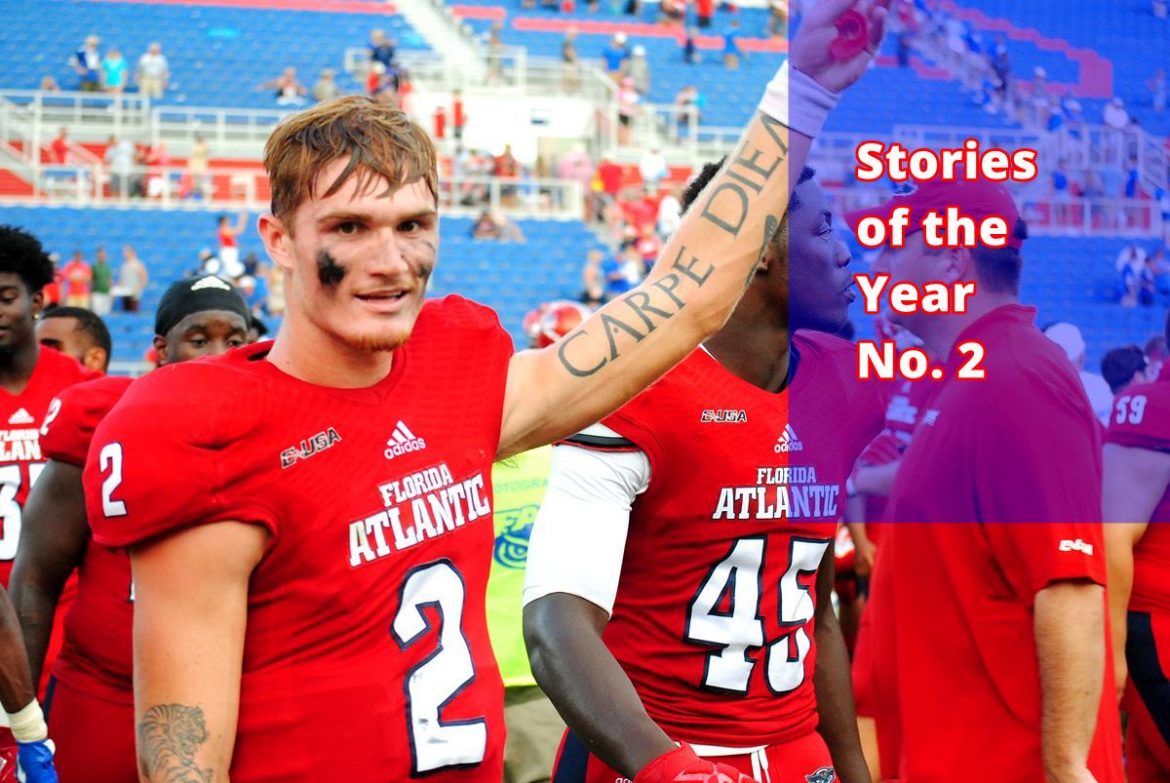 Oklahoma transfer Chris Robison won the job out of fall camp and held it most of the season – but never securely.

Uncertain of what he had in the quarterback room, coach Lane Kiffin brought in SMU transfer Rafe Peavey during fall camp to compete with Robison and former FSU QB De’Andre Johnson for the starting spot.

Peavey did start one game in place of the then-injured Robison, but that didn’t happened until Week 9 – a loss to Louisiana Tech.

Johnson showed flashes in his brief appearances throughout the season, highlighted by his 4-for-6 performance at FIU that included two touchdown passes. Johnson also rushed for 50 yards in that game on seven carries, but never managed a start for the Owls and ultimately transferred to Texas Southern during the offseason.

Robison figured to have a chance to cement his role as starter during spring football, but a night of drinking and drug use that prompted a sexual battery allegation – later retracted – led to his suspension from all of spring practices.

No charges were ever filed against Robison. Though he was the subject of a student affairs investigation, Robison is now back with the team and is expected to participate in fall camp.

On top of all this, another former FSU quarterback, Deondre Francois, publicly announced he would be transferring to FAU, though sources continue to tell OwlAccess.com that won’t happen.

Combine all of these events, and it’s certain that the quarterbacks will once again be the focus when fall camp opens.

What We Wrote About The FAU QB Battle

Why FAU’s QB Battle Is Important

Let’s start with the elephant in the QB room. Francois announced his intention to transfer to FAU, but that doesn’t mean FAU will take him. When you were considering which college you wanted to attend, did you simply announce where you were going and that made it true? Of course not. You had to complete the admissions process.

Despite the fact that Francois is pretty good at football, there is no law that says FAU has to admit him to school. There are enough red flags from his off field behavior to give any admissions officer a reason to deny. And even if the school does admit Francois, it doesn’t sound like he’d be permitted to play football for the Owls. There is still a small chance he could gain admittance and join the team for the fall, but no one associated with the program is counting on that happening.

It doesn’t sound like Robison’s spring suspension will have affect his fall availability. He certainly would have benefited from the extra practice spring should have provided. As a redshirt freshman Robsison threw for 2,450 yards and 12 touchdowns against 10 interceptions. Those statistics aren’t terrible, but the offense bogged down at critical moments, especially in the second half of games last season.

Though reinstated, Robison won’t automatically assume the starter’s role. Tronti and Agner both played well in spurts during spring ball. Neither is as physically talented as Robison, but more goes into the decision than pure talent.

Jason Driskel guided FAU to the Conference USA championship in 2017 in large part because of his decision making and game management. During the spring, Kiffin compared Tronti’s skill set favorably to that of Driskel.

Robison’s return should lead to a three-way battle between him, Tronti and Agner for the starting job against Ohio St. And like last year, the battle may well extend even longer than that.

The QB Saga
Two QBs transfer to FAU. Another says he will. And the starter is suspended for the spring. The FAU QB saga is the No. 2 FAU Story of the Year.
was last modified: June 20th, 2019 by Chuck King
June 20, 2019 0 comment
0 Facebook Twitter Google + Pinterest