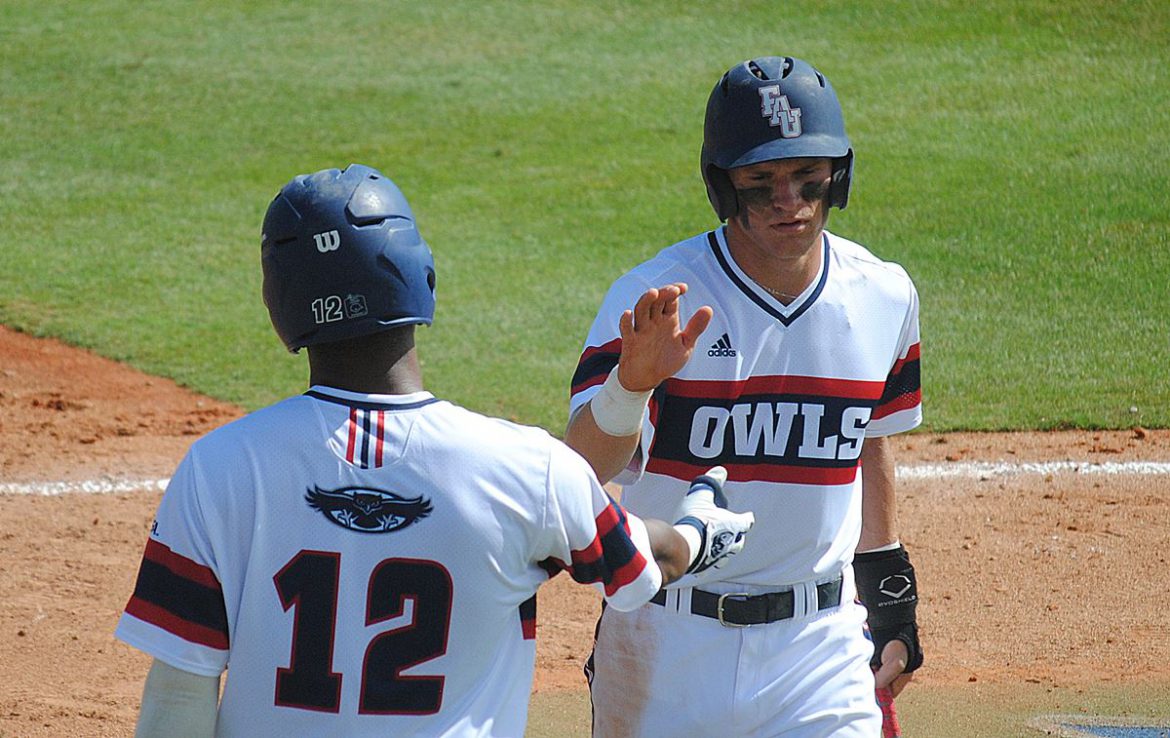 BOCA RATON – Newcomer Diamond Johnson’s single to right with two out and runs on second and third in the bottom of the ninth propelled FAU to a 3-2 walk-off win over George Washington, giving the Owls a sweep of the season-opening series.

“I just want to stay simple, stay short to the ball,” Johnson said.”Not try to be a hero.”

But a hero he was.

The Owls’ No. 9 hitter, Johnson picked a good time to extend his hitting streak to three games. He drove in Eric Rivera with the tying run and pinch runner Richie Nizza with the game winner.

The Owls dugout emptied as players and coaches raced to celebrate with Johnson between first and second base.

“We were fortunate enough to get out of here with a win,” McCormack said.

FAU trailed for the first time this season when Vince Coletti gave up a home run to Isaiah Pasteur on the first pitch of the ball game.

The Colonials scored their second run of the game in the fourth inning on a single to center field by Robbie Metz. Coletti got himself out a fourth inning jam, leaving the bases loaded by forcing a ground out to third.

Coletti grew more comfortable as the game progressed, tossing scoreless fifth and sixth innings before being removed for a reliever.

Trailing 2-0, Andru Summerall’s sacrifice fly in the seventh opened the scoring for FAU.

Moving Forward: Drew Peden threw three perfect innings of relief to earn the win. …The Owls pitching staff started 2018 by only allowing three runs through three games. …The Owls defense only made one error compared to George Washington’s six throughout the series.

Sliding Backward: Tyler Frank struggled through the George Washington series going 1 for 10 and committing an error. …The Owls left six men on base on Sunday and 25 in the series.

Key Stat: 14. The Owls walked 14 times throughout the series.

Up Next: FAU heads to Gainesville on Tuesday at 6pm to play the Gators.

Instant Message: “Passion and emotion is really good, but I thought that it got the better of us in the middle innings.” – FAU coach John McCormack