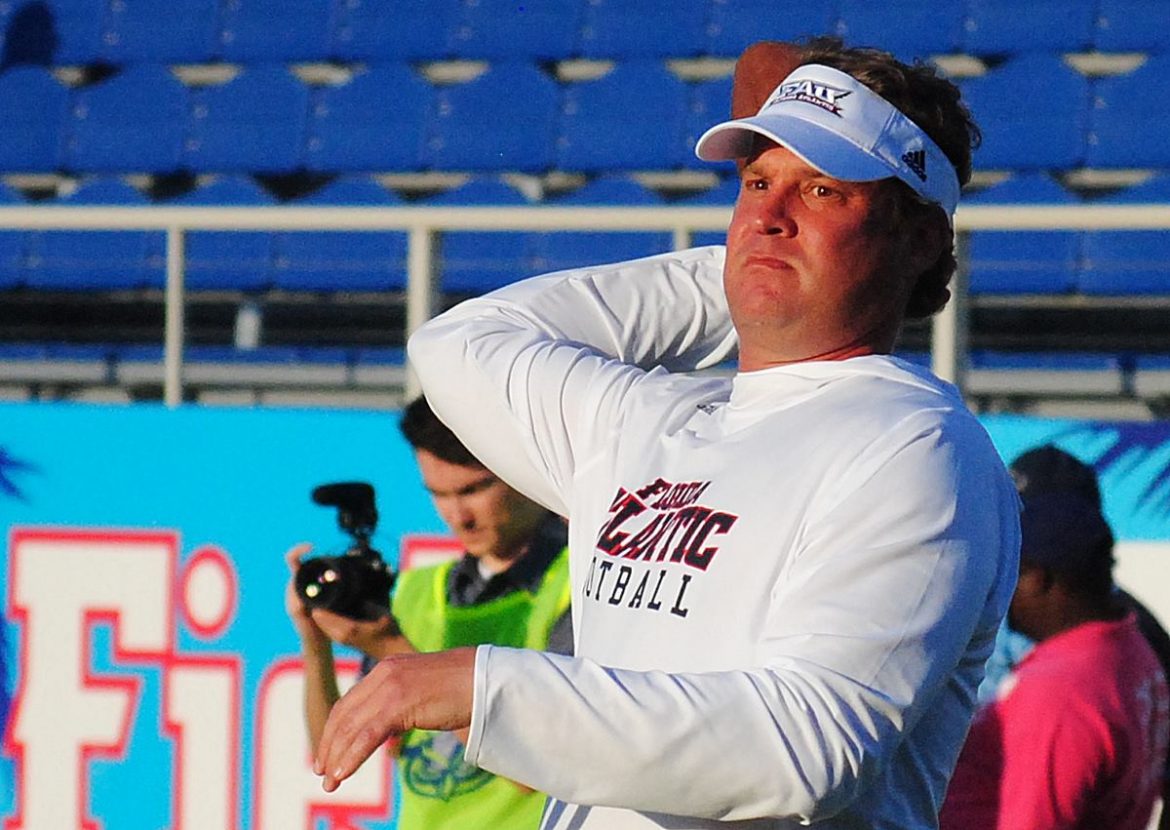 Full Circle
Lane Kiffin lands a commit from Pahokee offensive lineman Deshawn Richardson - his first Pahokee commit since being banned from the school.

BOCA RATON – Lane Kiffin appears to have officially made peace with the people of Pahokee – doing so by signing the cousin of the player caught up in the middle of the original kerfuffle.

Tackle Deshawn Richardson’s commitment on Sunday is the first from a Pahokee player since Kiffin slighted the town while serving as Tennessee’s coach.

“It’s great to be the first to play for Lane Kiffin,” Richardson said.

In 2009, while discussing the recruitment of and signing of Pahokee wide receiver Nu’Keese Richardson, Kiffin described Pahokee in less-than-flattering terms.

According to Al.com, Kiffin said, “For those of you who haven’t been to Pahokee, there ain’t much going on. You take that hour drive up from South Florida, there ain’t a gas station that works. Nobody’s got enough money to even have shoes or a shirt on.”

After hearing those comments, then-Pahokee coach Blaze Thompson announced he was banning Kiffin from the campus that produced nine NFL players players since 2003 – including Anquan Boldin, Janoris Jenkins and Pernell McPhee – until the town received an apology. Thompson went so far as to kick a Tennessee assistant off campus during a subsequent recruiting trip.

Deshawn, a cousin of Nu’Keese, committed to the Owls during halftime of the Super Bowl. The commitment came a few hours after concluding his official visit.

The FAU offer came to Richardson late – during the past week. Prior to his visit the 6-foot-2, 290-pound tackle had been considering FIU and Arkansas-Pine Bluff.

“He was a sleeper,” Pahokee athletic director Brian Crawford said.

Crawford characterized Richardson as a hard worker and a quick learner.

“I’m quiet, but on the field I’m a whole different person,” he said.

Richardson is the third offensive lineman to commit to FAU’s 2019 recruiting class. Like Richardson, Miami-Columbus tackle Federico Maranges will sign on Wednesday.

Junior college transfer Lavante Epson signed during the early period and is already enrolled at FAU.

The Owls are also hoping to land Autauga Academy (Ala.) tackle Adarius Tolliver, who has narrowed his choices to FAU and Indiana.