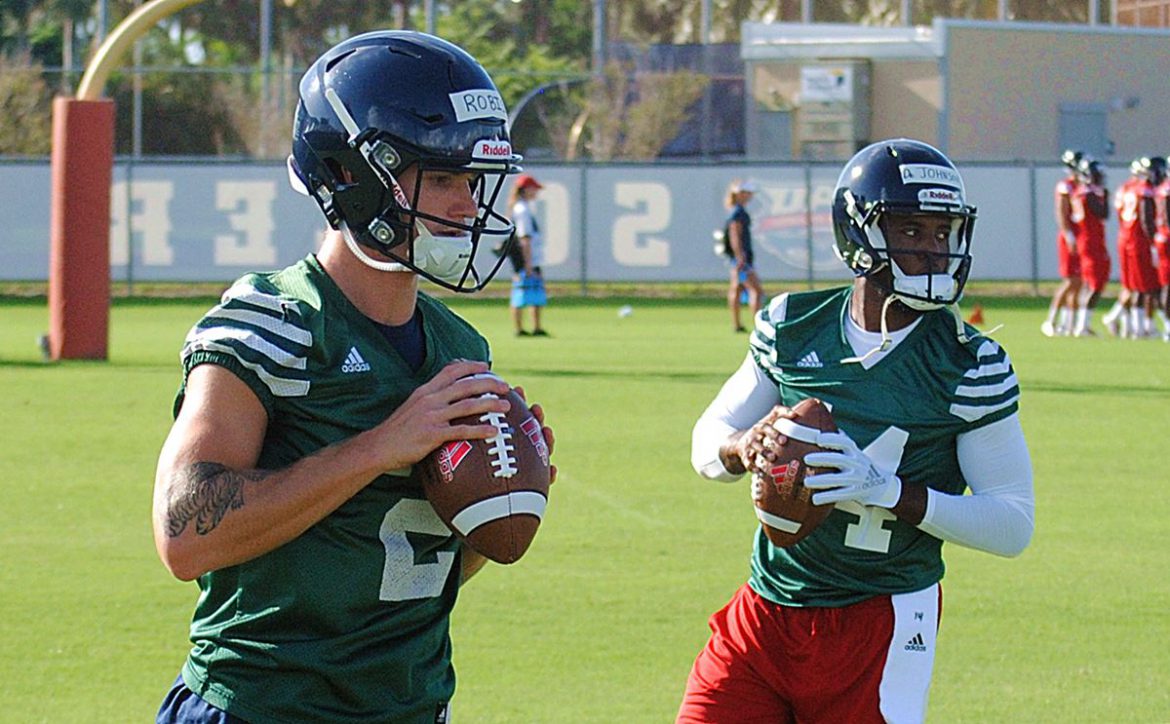 BOCA RATON – FAU coach Lane Kiffin isn’t ruling out the possibility of playing more than one quarterback in the season-opener at Oklahoma.

“We’d like to have one,” Kiffin said, referring to the starting quarterback decision. “We’d like to already have had it done. It’s not done. Could it be two? I don’t know that. We’ve got to always do what’s best for the team.”

Fall camp opened with De’Andre Johnson and Chris Robison locked in a battle to be the Owls’ primary signal caller.

The battle became more complicated when former SMU quarterback Rafe Peavey arrived at FAU as a graduate transfer following the start of camp.

FAU concluded the fall camp portions of practice on Tuesday and will turn its attention to Oklahoma game planning on Wednesday.

Whoever does start against the Sooners probably shouldn’t feel to secure in their role.

“Sometimes, eventually you have to make a decision and sometimes they’re really close to where those decisions are made and then if it doesn’t go well then it’s a quicker change during a game or early in the season, versus where, OK, if it seems there’s a lot of separation, even if a guy’s struggling you stay with him longer,” Kiffin said.

Last season, also judging a three-way quarterback battle, Kiffin and the Owls selected Daniel Parr as the winner. Parr started FAUs first three games, with FAU winning only one of them, before Kiffin switched to Jason Driskel. After dropping his first game as a starter, Driskel led the Owls to 10 consecutive victories, their first Conference USA championship and a Boca Raton Bowl title.

Kiffin did insert Johnson, who began last season as the Owls’ backup quarterback, into the 2017 season opener against Navy, but surgery to remove blood clots later that week prematurely ended Johnson’s season.

Ultimately it might take a strong performance from one member of the trio against Oklahoma for Kiffin to feel secure in his quarterback choice.

“That would be the best,” Kiffin said.

Receiving Challenges: Injuries and a lack of depth at the wide receiver spot are complicating FAU’s quarterback decision.

Redshirt sophomore John Mitchell produced when he was elevated to the starting unit but has missed more than week. Mitchell didn’t play at all last season after undergoing back surgery. Prior to the Owls’ first scrimmage of the fall Mitchell suffered an undisclosed injury that, in turn, aggravated his back issue.

Pseudo Game: Kiffin said the Owls will play what he called a “mock game” on Saturday in an effort to help the Owls “master situations” they will face in games. It will be the first time all fall that the offense and defense stand together on the same sideline.