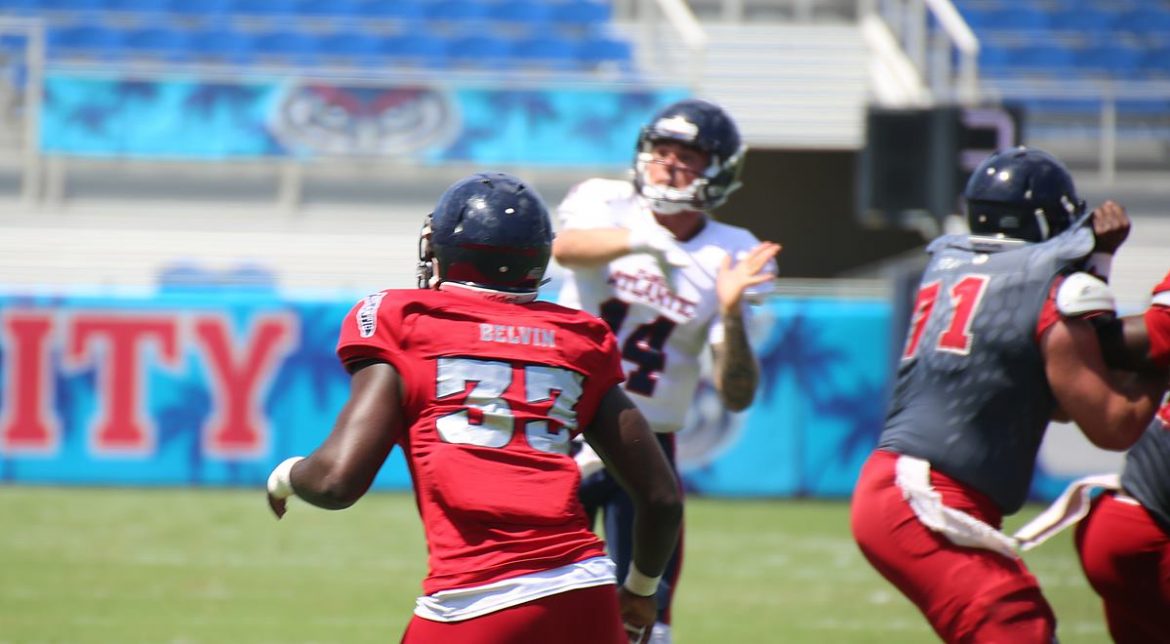 Roaring Lions
Spring arrived like a lion for Leighton McCarthy and David Belvin who transitioned to LEO - the most intriguing position in new FAU DC Glenn Spencer's defense.

They also had to adjust to playing in space as off-ball linebackers.

“I really like the new format of the defense, giving me and Leighton McCarthy a chance to actually be out there, be more versatile in the backfield and in the front,” Belvin said.

It’s relatively common in today’s game for defenses to employ multiple fronts. Where first-year coordinator Glenn Spencer’s system strays from the norm, however, is that it’s asking players to transition their roles on a down-to-down basis.

That transition is most dramatic for McCarthy and Belvin, who now play the LEO role in Spencer’s defense.

“Attack the ball,” said Belvin, a redshirt junior who rarely saw the field during his first three seasons. “Gotta go hunt, so that’s what we do.”

In a four-man front, McCarthy or Belvin – depending on which one is in the game – lines up at his normal hand-in-the-dirt defensive end position. But when Spencer calls for a three-man front, that player moves to inside linebacker, pushing the two who normally play there to the outside.

“It’s not a position change, it’s just a system,” FAU coach Lane Kiffin said. “It’s like moving a guy from end to tackle, or something like that on certain downs and distances.”

Being able to switch looks without substituting personnel is critical considering the vast number of teams that are now running up-tempo offenses. The purpose of playing at a higher pace is often to take advantage of defenses being in unfavorable fronts for certain situations.

But FAU’s new, versatile defense will counteract that.

“It’s more disruptive because we give more looks than we did last year,” said McCarthy, a two-year starter earned co-MVP honors among defensive linemen this spring.

While the idea is great on the surface, moving an edge rusher to inside linebacker is easier said than done. Some lack the lateral agility to move effectively in space. Others lack the position’s mental requirements, such as taking correct tackling angles and reading plays.

Then there’s McCarthy and Belvin. They both looked comfortable off the ball, showing a knack for stuffing run plays in the backfield as well as covering plenty of ground in pass coverage.

Dropping into coverage was natural for the 6-3, 205-pound McCarthy, who’s built more like a college linebacker than defensive end, anyway.

But Belvin’s athletic progression from Little League offensive lineman, to big-bodied high school D-lineman, to now was anything but. And he’s thrilled for the opportunity.

“Being on the O-line when I was little and now playing linebacker and stuff like that, that’s a big man’s dream – to actually get out there on the field and cover,” Belvin said. 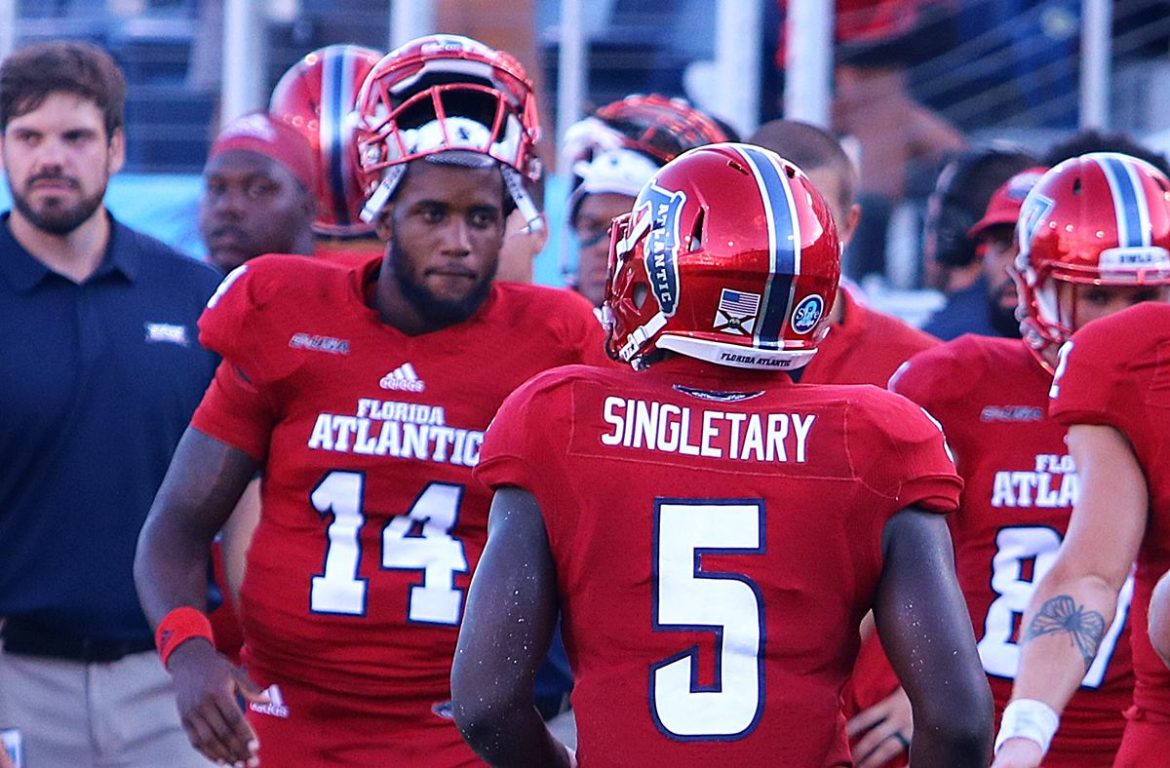 Bold Predictions:
FAU vs. WKU
Both Robison and Johnson enjoy good days at QB, the FAU ground game continues to churn and some unheralded players make plays against WKU.

BOCA RATON – Does anything make the world of FAU football seem more right than a victory over FIU in the Shula Bowl?

That’s what happened on Saturday – in blowout fashion. Now the Owls welcome Western Kentucky to Howard Schnellenberger Field for a homecoming tussle.

FAU needs to win two of its final three games to become bowl eligible. Western Kentucky’s fate is already sealed. At 1-8, the Hilltoppers will head home long before kickoff of the season’s first bowl game.

What can FAU fans expect against WKU? Each week our Chuck King and Wajih AlBaroudi offer our Bold Predictions for that week’s game. Here’s what we expect from FAU vs. WKU this week.

FAU Offense vs. WKU
King: The Owls finally hit explosive plays. Nine games into the season, FAU’s longest play from scrimmage covered only 49 yards. That changes on Saturday. Now that FAU is once again running the ball with power and consistency, defenses have to commit additional players to stopping Devin Singletary and Kerrith Whyte. Toss quarterback De’Andre Johnson’s explosive running ability into the mix – he’ll play and might start – and defenses focus even more on the run. This allows FAU quarterbacks, both Johnson and Chris Robison, to look deep off play action. Wide receiver Jovon Durante and tight end Harrison Bryant are the biggest beneficiaries. John Mitchell may also get free. And is this the week DeSean Holmes or LaDante Harrris finally delivers big play? Could be.

AlBaroudi: Quarterbacks Chris Robison and De’Andre Johnson both impress. After last week’s exhilarating performance in the Shula Bowl, Johnson proved he was worthy of a role in FAU’s offense going forward. But that doesn’t mean Robison, the Owls’ starter, can’t join in the fun as well. FAU coach Lane Kiffin brought up the idea of playing two quarterbacks this week, and against a solid but unspectacular Western Kentucky defense, they both have potential to light up the scoreboard. Robison will pass for two touchdowns and Johnson will add a rushing score.

FAU Defense vs. WKU
King: Jalen Young intercepts two passes. Picks tend to come in bunches for Young, who last season tied for second nationally with seven interceptions. He picked off one pass during Saturday’s Shula Bowl and should feast on a young and battered WKU QB unit that has under-performed all season. It wouldn’t be surprising for Rashad Smith to add another pick to his team-leading total, and Ocie Rose always has a nose for the ball.

AlBaroudi: Jaylen Joyner has a big game. FAU hasn’t gotten a ton of production from the defensive tackle position this season, opening up an opportunity for the talented freshman to earn more playing time down the stretch. The reeling Hilltoppers will likely fall behind early, forcing them to go pass-heavy to keep up with the Owls. And Western Kentucky being in those obvious passing situations means Joyner will have plenty of chances to tee off on the passer. He will have a sack and three-plus tackles.

FAU Wildcard vs. WKU
King: Some unheralded players make contributions on Saturday. Defensive tackle Damian Horton recorded two tackles two weeks ago against La. Tech. He’ll increase that total on Saturday. Redshirt sophomore defensive end David Belvin has only one career tackle – that coming last week at FIU – but he saw some time with the second team defensive line this week. Wajih noted above Joyner’s recent surge at defensive tackle. Offensively, FAU elevated Jordan Merrell from the scout team to the slot receiver rotation in case Willie Wright (concussion) can’t play. With FAU building a hefty second-half lead, Merrell makes his first career catch. And with a berth in Conference USA’s championship game no longer a possibility, meaning there are only four games remaining on the schedule, any player who has yet to play a game this season can play in the remaining four games and still count this season as a redshirt year.

AlBaroudi: FAU passes the ball less than 15 times. As they showed last week, the Owls are at their best when they lean on the ground game. Running backs Singletary and Whyte have been nothing short of spectacular this season, and the FAU offensive line has been road grading defenses of late. The Owls ran the ball 28 times to only six passes in a second half against FIU which saw them outscore the Panthers 35-7. Not only does that style work in and of itself, it also opens up the play-action pass game for Robison and Johnson. Expect to see that same winning formula this Saturday.