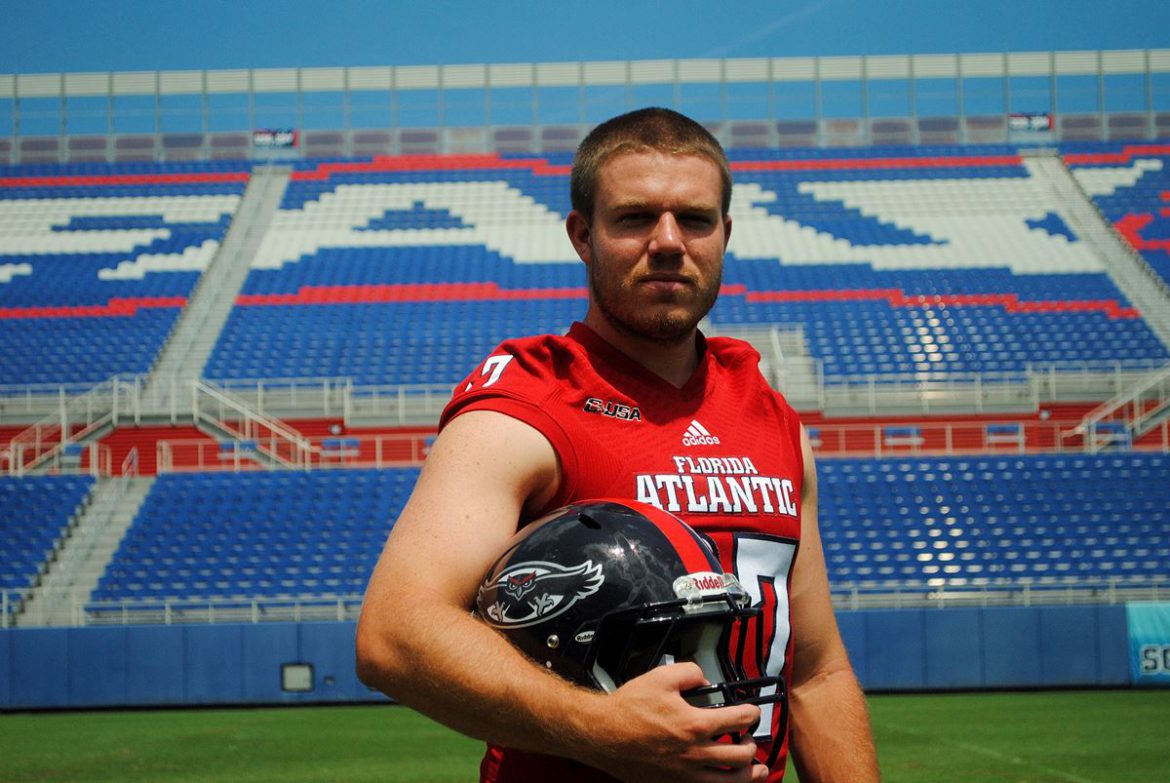 BOCA RATON – In an effort to improve the Owls for this season and next, FAU coach Charlie Partridge plans to ask the nation’s leading punter not to kick the ball so far – at least some of the time.

Yes, this approach is logical.

The explosive power in Dalton Schomp’s launchpad of a right leg is unquestioned. But he led the nation with a 48.0 average last season in part because Ryan Rickel handled the pooch punting duty, removing some of the field-position mandated 30-yard punts from Schomp’s totals.

Last year Rickel worked with Schomp, helping the latter master short punts, which ideally generally land softly and bound backward, like a golf ball on a green after being struck by a pitching wedge, instead of caroming into the end zone for a touch back.

The result? Partridge believes he has two quality FBS punters – and he want to keep both of them around as long as he can.

Partridge intends to ask Schomp, a senior who could be punting for an NFL team next season, to handle both the long and short punting duties this season, which would allow FAU to redshirt Rickel, a senior, giving him one more year of eligibility.

“So then you feel good if could happen for 2017,” Partridge said.

As for the Owls’ placekicking, Greg Joseph returns for his third season as a starter. Joseph’s 68.1 career field goal percentage is on the low side, and he’s only 9-of-18 from beyond 40 yards in his career, but Joseph does consistently find the end zone with his kickoffs, which puts the defense in good position.

In each of the past two seasons Joseph prevailed over Landon Scheer in camp kicking battles. Joseph won’t have to worry about Scheer in this camp. The redshirt sophomore underwent back surgery during the offseason and isn’t expected to be cleared for practice until after the season starts.

The battle to return punts and kicks may be the most wide open in camp. Henry Bussey, Kamrin Solomon and Jalen Young are the front runners to return punts, with Ladante Harris and several of the incoming freshmen expected to receive an opportunity to nab the role.

Bussey is also a potential kick returner, as is Marcus Clark, Ocie Rose and Harris.

SPECIAL TEAMS
P
Dalton Schomp (6-1, 220 R-Jr.)
Led the nation with a 48.0 average last season. Could actually be a better overall punter this season even if his average dips. Tabbed as C-USA’s Preseason Co-Special Teams Player of the Year.

Ryan Rickel (6-0, 170, Sr.)
Eight of his 10 punts pinned opponents inside the 20 last season. Owls would like to redshirt Rickel with the idea of saving him for the starter’s role next season.

K/FG
Greg Joseph (6-1, 220, R-Jr.)
Made four of five field goal attempts in 2015 season-ending victory over Old Dominion. Converted all but one of his 63 career PAT attempts. His 32 career field goals ranks third on FAU’s all-time list. Needs only 11 more to tie Mark Myers for the program record.

Patrick Trepcos (5-8, 180, Fr.)
With Landon Sheer expected to miss fall camp following surgery, the true freshman walk-on out of Palm Beach Gardens-Dwyer enters the season as the backup to Joseph.

Ryan Rickel (6-0, 170, Sr.)
If Rickel is forced to punt this year, he’ll also likely be forced to take over holding duties.

Kamrin Solomon (6-2, 205, Jr.)
FAU managed only 135 punt return yards all of last season. Solomon scored on a 94-yard catch and run last year. Could he bring needed explosiveness to the position?

KR
Marcus Clark (5-8, 185, R-So.)
Averaged 19.0 yards on his three kickoff returns last season. Owls are looking for ways to get Clark touches because he’s shown a propensity to make plays.

OTHER POTENTIAL CONTRIBUTORS
Ocie Rose (6-2, 190, So.)
Scored three defensive touchdowns last season and averaged 51.7 yards on his three interception returns last season. He knows what to do with the ball. Will get a chance during camp to field punts and return kicks.

Jalen Young (5-11, 185, So.)
Averaged 30 yards on his three interception returns last season. Played QB at Loxahatchee-Seminole Ridge, so he’s comfortable with the ball in his hands. Would primarily be a punt returner.

Ladante Harris (5-11, 170, R-Fr.)
Brings straight-up speed to the return game. Has been cleared to return to the field after ankle surgery kept him out of last season. When he’s healthy, Harris won’t get caught from behind.