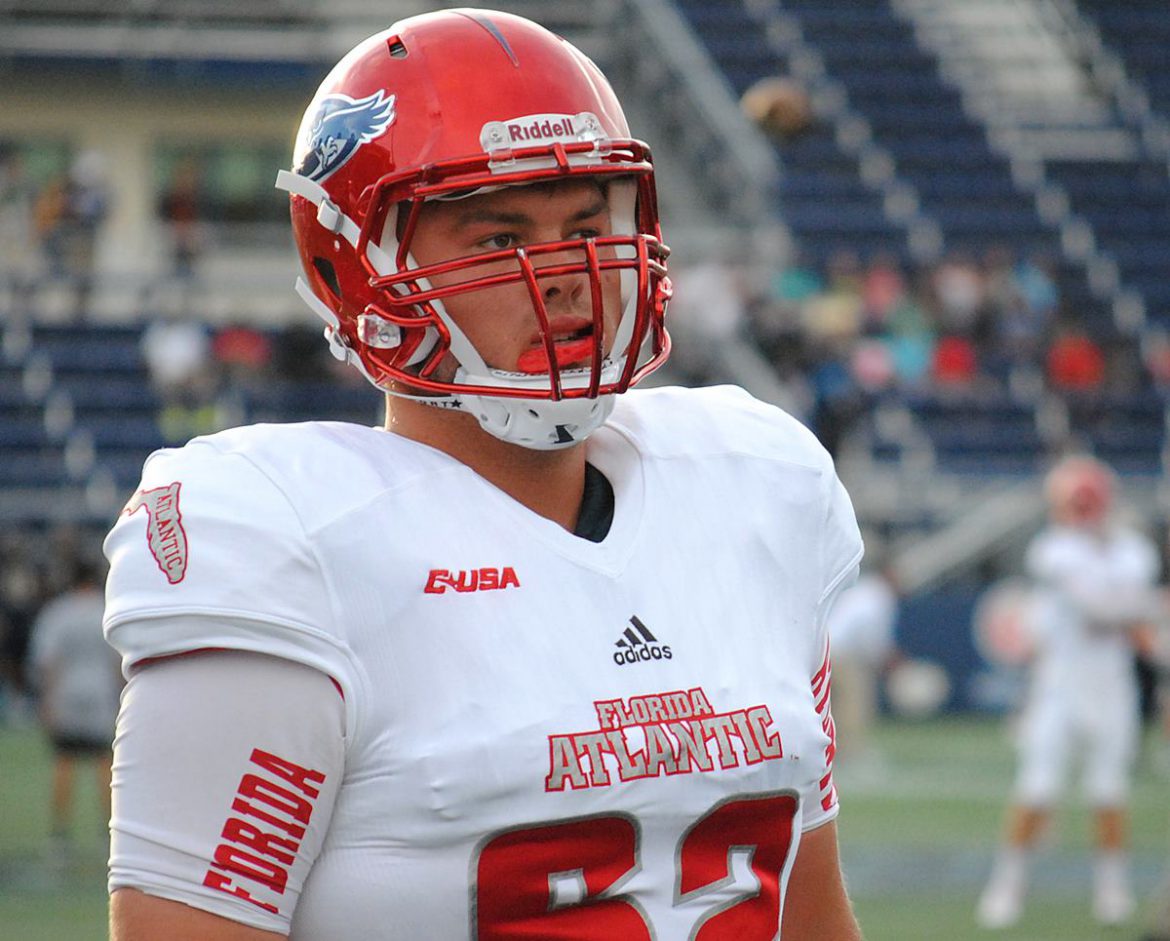 Another Blow
FAU loses OT Bryan Beack for the season to a knee injury - yet another blow to an offensive line already decimated by injury.

BOCA RATON – An FAU offensive line already struggling to find healthy bodies will have to endure another blow following the news that right tackle Bryan Beck will miss the remainder of the season because of a knee injury.

“Unfortunately we found out yesterday that Bryan Beck is going to be done for the season,” FAU coach Charlie Partridge said. “We’ll attack this challenge like we have the rest of them.”

A redshirt freshman, Beck started the last three games for FAU in the spot usually occupied by senior Kelly Parfitt, who missed a month with a knee injury of his own.

Beck underwent knee surgery as a true freshman, which forced him to miss all of spring practice and limited him in fall camp. Partridge did not say whether the most recent injury is related to the previous one.

“It really started to show up the last few days,” Partridge said of Beck’s injury.

Beck is the third FAU offensive lineman to have started at least one game who is now out for the season. Junior left tackle Reggie Bain broke his hip in a preseason motor scooter accident and will not play a down this season. Guard Tarrick Thomas, who was elevated to the starting spot when the Owls shuffled the offensive line to compensate for Bain’s injury, suffered a season-ending knee injury against Ball St.

The improved play of Beck over the past month allowed Parfitt to move to the less physically taxing guard spot when he returned to the field in the Owls most recent game, at Marshall. Parfitt re-injured his knee in that game and is doubtful for Saturday’s game at Western Kentucky.

Jakobi Smith replaced Parfitt in that game before suffering an injury of his own. Smith is still questionable with concussion-like symptoms. Additionally, Partridge said true freshman Brandon Walton, who was forced into action earlier this season, is questionable for Saturday because of an undisclosed injury.

“As you look at all the issues that we’ve had there, they’re all very different,” Partridge said. “If there were a pattern of injury, then you would take a look at maybe something we are doing as a program.”

Exiting spring practice redshirt sophomore Byers Hickmon appeared primed to play a significant role along the line this season, but he missed nearly all of fall camp while recovering from an unspecified health issue.

FAU coaches were hopeful Hickmon could work his way back into the rotation but he, too, is now out for the season.

Another Blow
FAU loses OT Bryan Beack for the season to a knee injury - yet another blow to an offensive line already decimated by injury.
was last modified: October 25th, 2016 by Chuck King
October 25, 2016 0 comment
0 Facebook Twitter Google + Pinterest 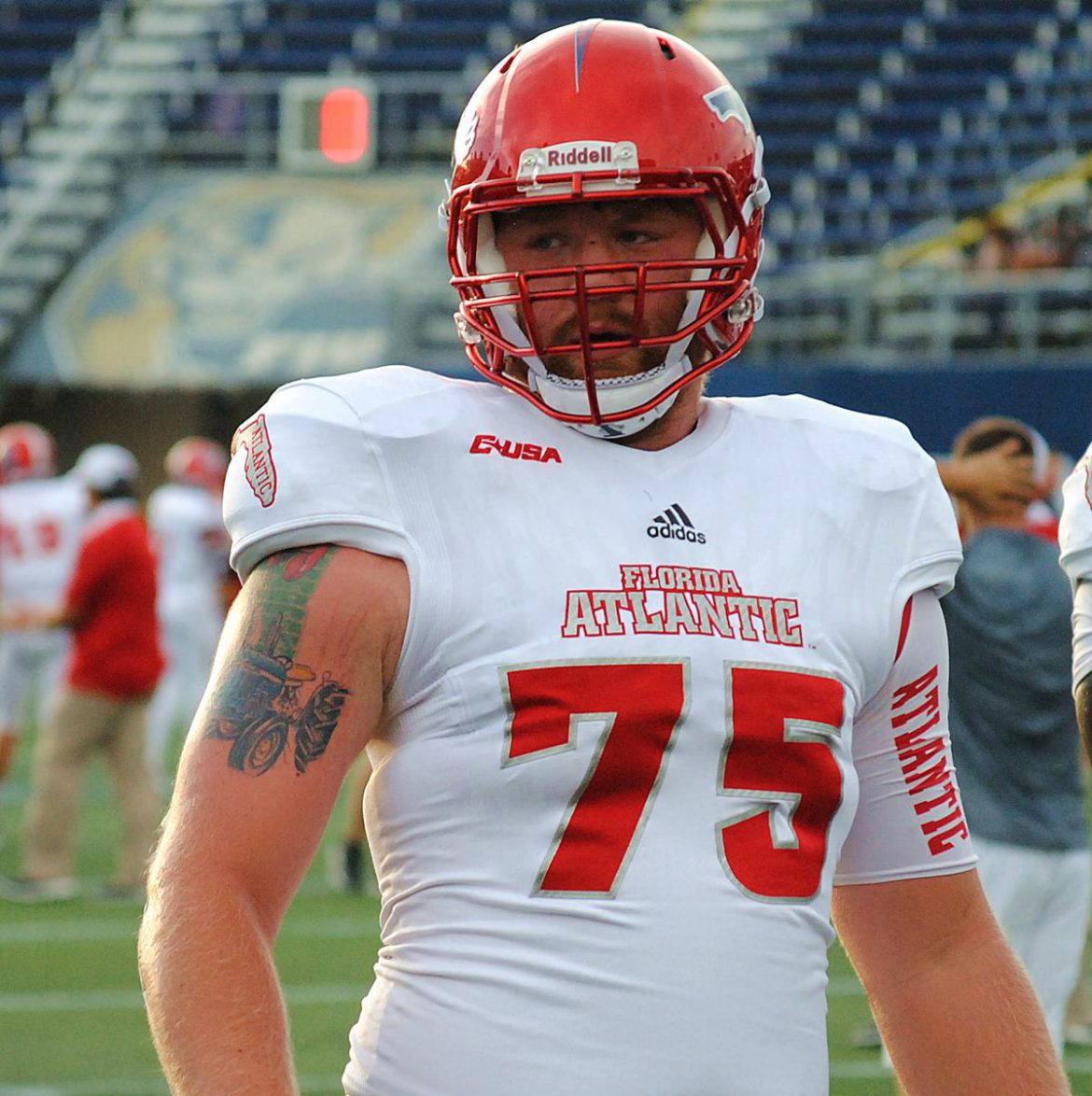 Crazy Eights
Injuries to Parfitt and Smith have FAU looking at starting its eighth different offensive line in as many games.

Parfitt played guard instead of his usual right tackle partly because it required less mobility. He re-injured that knee early in the first quarter but did return. A second re-injury in the second half forced him to the bench for the remainder of the game.

The concussion-like symptoms Jakobi Smith has been dealing with complicate matters for the Owls. Smith broke camp as a member of the scout team for the Owls but the massive amount of injuries incurred by FAU up front eventually elevated him to starting guard.

It was Smith that Parfitt replaced in the starting lineup at Marshall two Saturdays ago. With Smith and Parfitt sidelined late against the Thundering Herd, Jack Breshears, a redshirt freshman, completed the game and stands to make the first start of his career on Saturday.

“Jack Breshears is a young guy that’s having to step up and having to play more,” FAU offensive coordinator Travis Trickett said. “He’s got to continue to improve.”

One bright spot along the line for FAU in recent weeks has been the development of redshirt freshman tackle Bryan Beck, who appears to be asserting himself as a starter.

Beck missed all of spring ball and much of fall camp as he recovered from knee surgery. His progress factored into the decision to slide Parfitt to guard at Marshall.

“Physically, he may not be the strongest guy but he’s doing what he can fundamentally and he’s getting better each week,” Trickett said.

The chaos along the offensive line began in the week leading up the start of the season when starting left tackle Reggie Bain broke his hip in a motor scooter accident.

Since then fellow starters Antonyo Woods, Roman Fernandez and Parfitt have all missed at least one game. Dillon DeBoer emerged from camp as the starting center, moved to tackle upon Bain’s injury, then returned to center a couple games later. He’s the only starter from fall camp to have played in every game this season.

Woods returned from his injury and moved from right guard to left tackle. Fernandez is also back at left guard.

“It’s allowed us to have a good solidified left side there,” Trickett said.

“We’ve still got another piece of the puzzle that we have to solidify with the right guard.”