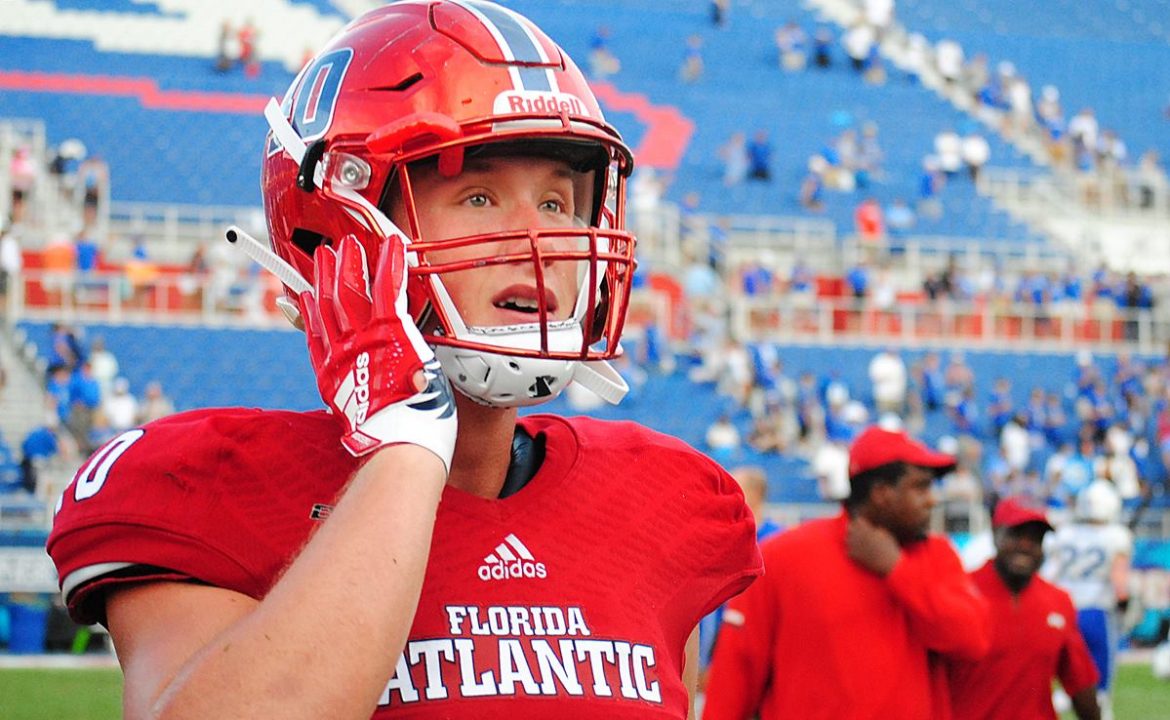 Conference USA coaches expect FAU’s Harrison Bryant to the the top tight end in the conference this season.

Bryant was the lone FAU representatives on the preseason All-Conference team announced on Monday, a couple days ahead of the start of Conference USA football media days in Dallas.

“I want to thank the coaches that selected me for this award as well as my teammates, coaches and support staff that has helped me grow on and off the field the past for years,” Bryant said in an FAU press release.

As a junior Bryant’s 45 catches, 662 yards and four receiving touchdowns all ranked second among Owls, behind only wide receiver Jovon Durante. Bryant’s caught 83 passes for 1,133 yard and nine touchdowns during his first three seasons at FAU.

At 6-foot-5 and 235 pounds, Bryant also received praise in the spring for his blocking both at the line scrimmage and in space. Kiffin referred to Bryant as a future NFL draft choice.

FAU’s defensive leader, linebacker Rashad Smith did not make the list. Smith enjoyed a breakout junior season in 2018, leading the Owls in tackles with 86 and interceptions with four.

This year FAU’s defense is expected to revolve around Smith.

Bulldozers
Woods, Fernandez and Bain are the first FAU teammates ever to earn All-Confernece honors. They did it by starting all 13 games.

BOCA RATON – In a season of firsts and program records, one’s been overlooked.

Heading into the 2017 season, only once – Nello Faulk in 2006 -had FAU offensive lineman had ever been selected first-team all conference.

Not one of the three made Conference USA’s preseason All-Conference squad.

“It just shows that when we have a healthy line that’s played all 13 games with no one going down, good things can happen,” Woods said.

That’s a far cry from what happened last season, when the Owls started eight different offensive line combinations in their first eight games.

As healthy as the Owls were they did have to overcome different kinds of adversity to get to this point.

A preseason All-Conference USA selection prior to the 2016, Bain never saw the field last year after breaking his hip in a motor scooter accident during fall camp.

The Owls weren’t sure Bain would be able to play this year, let alone do so effectively.

“It just shows how much work I put in,” said Bain, a redshirt junior.

Woods, a redshirt senior, had never played center prior to this year. His inexperience showed early in the season when the Owls struggled with wayward snaps.

Once Woods changed the way he gripped the ball on snaps, grabbing the point while holding the ball at a near 90-degree angle rather than laying it flat and gripping the laces, everything came together.

“Looking back on it, it was a struggle at the beginning but I told everybody I was going to get it right,” Woods said, “I got it right.”

Fernandez simply became a model of consistency, often bulldozing defensive lineman despite having a size deficit.

Behind those three, along with guard Jakobi Smith and tackle Brandon Walton, FAU led Conference USA in rushing yards with 3,682 – nearly 1,400 yards more than any other C-USA team and almost the same amount more that the Owls rushed for last season with the same set of ball carriers.

Running back Devin Singletary, the C-USA MVP, benefited most from the improved offensive play, rushing for 1,796 yards and 29 touchdowns.

Offensive coordinator Kendal Briles’ new scheme undoubtedly aided Singletary, Buddy Howell and the rest of the Owl ball carriers, but such lofty rushing totals wouldn’t have been possible without the continuity from an offensive line that featured three players enjoying their finest seasons.

“Being able to start all 13 games, like Antonyo said, it really helps building continuity, helping all of us execute,” Fernandez said. “Our all-conference accolades didn’t come just by us. We all executed and everyone noticed.”

Bulldozers
Woods, Fernandez and Bain are the first FAU teammates ever to earn All-Confernece honors. They did it by starting all 13 games.
was last modified: December 10th, 2017 by Chuck King
December 10, 2017 0 comment
1 Facebook Twitter Google + Pinterest 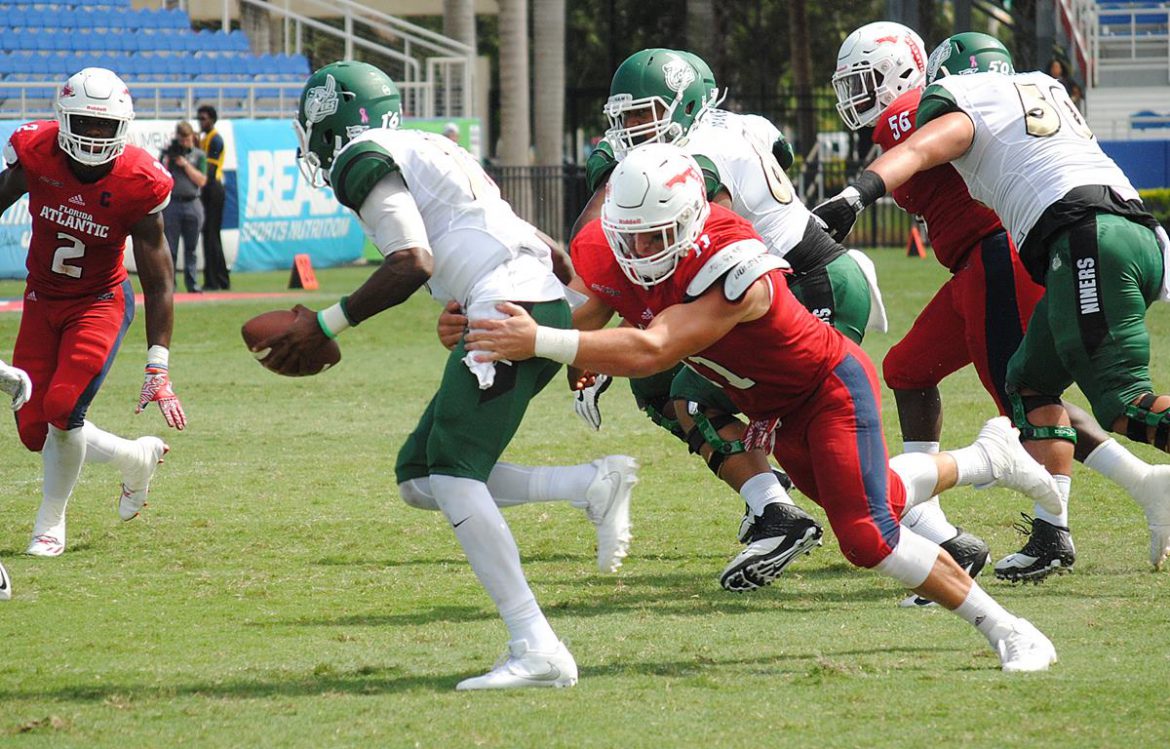 Trey Hendrickson continues to grab postseason honors, this time at the conference level.

Hendrickson, named by FAU as its team MVP on Sunday, was the lone Owl selected by the 13 conference coaches as an All-Conference USA performer.

The preseason Conference USA Defensive Player of the Year, Hendrickson recorded 9.5 sacks and 50 tackles in is senior season. This is the second consecutive season that Hendrickson, a defensive end, was an All-C-USA choice.

Hendrickson is also tied for the lead nationally in blocked kicks with four. While C-USA does announce all-conference special teams performers, kick blocker is not one of the available categories.

Conference USA will announce its offensive, defensive and special team players of the year on Wednesday. It’s conceivable that Hendrickson could win the defensive and/or special teams award, though Kylen Towner of Western Kentucky does lead the nation in kick return average at 40.8 yards and Louisiana Tech’s Carlos Hendrerson, seventh nationally in kick return average, is tied for second nationally with two returns for touchdowns.

The Owls were much better represented on the All-Freshman team, where three FAU players – all with an offensive slant – were honored.

Despite not starting much of the season, true-freshman Devin Singletary rushed for 1,021 yards, making him the first FAU freshman ever to break the 1,000 yard mark. He set a program record with 257 rushing yards against Rice. His 12 rushing touchdowns would have set a new program single-season record had teammate Buddy Howell not rushed for 13 this season.

C-USA honored Harrison Bryant, another true freshman, as the conference’s All-Freshman tight end. Bryant caught six passes for 63 yards on the season. His role increased greatly in the second half of the year when the Owls compensated for an injury-depleted offensive line by using more two-tight end sets.