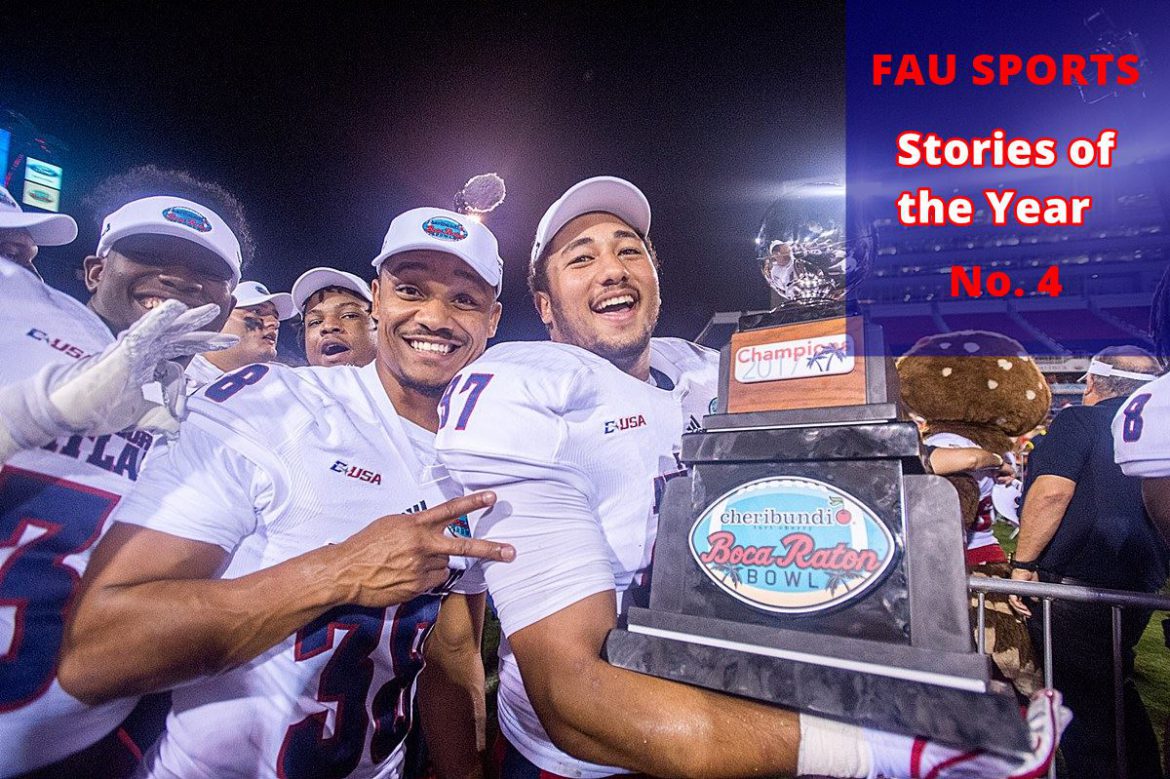 Boca Bliss
FAU football capped the best season in program history with a berth, and a blowout victory, in the Boca Raton Bowl - earning the No. 4 spot on the FAU stories of the year countdown.

BOCA RATON – FAU hadn’t been to a bowl game since winning the 2008 Motor City Bowl, so most any late December game would have been eagerly welcomed by FAU fans.

Howard Schnellenberger Field on the campus of Florida Atlantic served as the host for the Boca Raton Bowl since the game’s inception in 2014.

As FAU waited on Dec. 4 to learn its bowl assignment, playing in the Owls home stadium wasn’t their first desire. The Owls wanted to go somewhere new and play the best competition available. Doing so would essentially double the school’s national television exposure. The football team would be on television one night and, as Boca Raton Bowl host, the university would be on display another night.

Conference USA and its bowl partners ultimately paired FAU with Mid-American Conference runner-up Akron in the Boca Raton Bowl. While disappointed at first, FAU made the most of the situation.

And when it came time for the game, FAU capped the best season in program history with a 50-3 blowout of Akron that let the nation see what Kiffin had built in his first year.

Returning FAU to bowl eligibility was an early goal for Kiffin, and he accomplished that one rather quickly.

While the Owls weren’t initially excited to play at home for their bowl game, in many ways doing so worked out quite well. The Boca Raton Bowl was the only game on television that night, thereby exposing FAU to a national audience of college football fans.

FAU put on a show that Tuesday night. The Owls never trailed, led 21-3 at the half, added 29 more points in the second half and kept the Zips out of the end zone all night.

Devin Singletary showed a national audience who had maybe heard of him but never seen him play that the hype was deserved, rushing for his 30th, 31st and 32nd touchdowns of the year as part of a 124-yard night.

Quarterback Jason Driskel threw for two touchdowns and rushed for two more in what turned out to be the final game of his FAU career.

The Owls rolled to 582 yards of total offense while their dominating defense limited Akron to 146 total yards.

Akron wasn’t the ideal opponent in that the Zips didn’t have the talent to play with FAU, but the Owls extended their undefeated record in bowl games to 3-0, and for the first time in program history FAU fans capped a football season by celebrating on their home field.

FAU concluded the season by winning its final 10 games, positioning the program as one of the favorites to grab the Group of Five spot in a New Year’s Day bowl next season.

Boca Bliss
FAU football capped the best season in program history with a berth, and a blowout victory, in the Boca Raton Bowl - earning the No. 4 spot on the FAU stories of the year countdown.
was last modified: June 22nd, 2018 by Chuck King
June 19, 2018 0 comment
1 Facebook Twitter Google + Pinterest 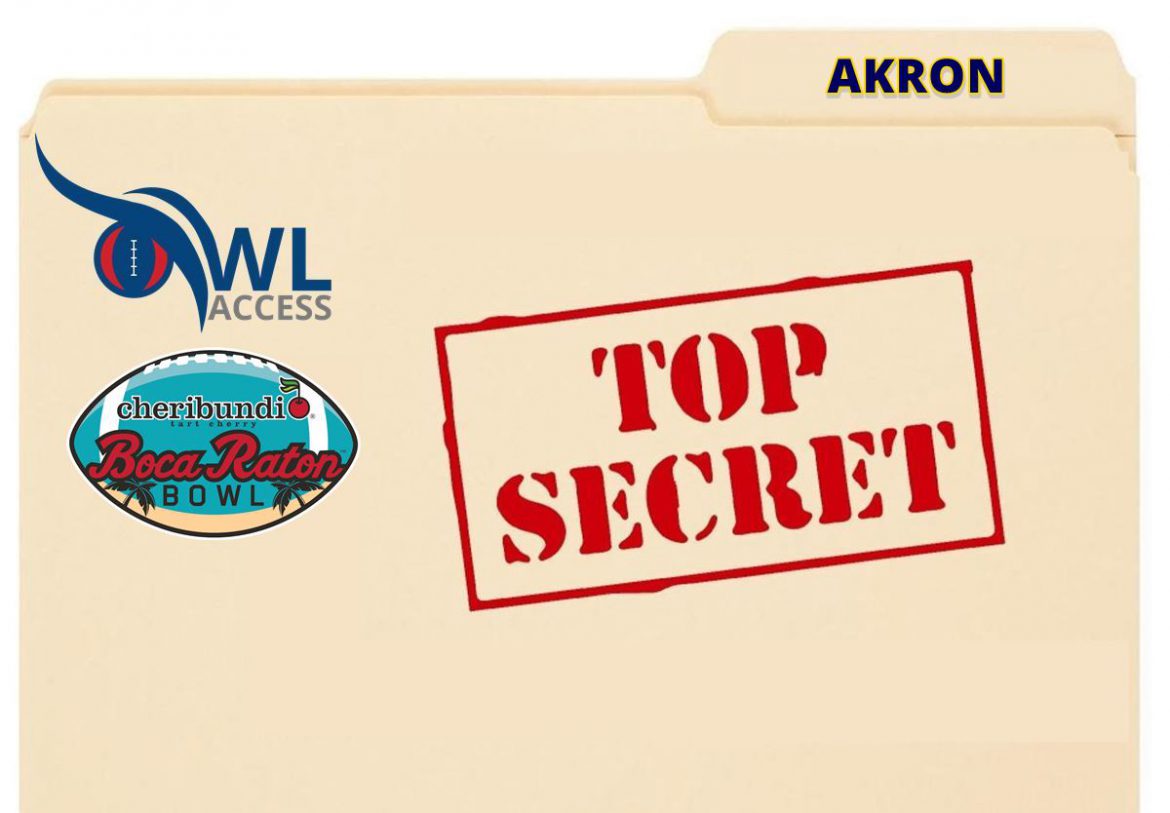 OPPOSITION RESEARCH:
Akron Zips
A late season quarterback change energized Akron's offense, but the Zips defense, specifically against the run, can be exploited by FAU in the Boca Bowl.

BOCA RATON – Looking to cap its best season since moving to the FBS level, FAU has one more challenge on the year, the Akron Zips.

Akron, (7-6, 6-3 MAC) has not fared well against non-conference tough competition. The only non-conference win came in a blowout of Arkansas- Pine Bluff.

Both teams reached their conference championship games. Unlike the Owls, the Zips could not win their title, falling to the Toledo Rockets.

A big move that happened in the 10th game of the season for the Zips was a quarterback change; they went from three-year starter Thomas Woodson to red shirt freshman Kato Nelson. Nelson who is a much more explosive quarterback has impressed in his four starts.

“Akron can fly to the ball,” FAU running back Devin Singletary said.“They try not to give up a lot of big plays.”

FAU will also be going against a big football family name. Terry Bowden. son of the great FSU coach Bobby Bowden, coaches of the Zips.

AKRON OFFENSE
The Zips run a spread offense. FAU is very familiar with that since most C-USA teams run something similar. They may not be as familiar with the quarterback. Kato Nelson, from South Florida, is very much a dual threat quarterback that can hurt defenses with his arms and legs. “(Nelson) can really move around and make throws,” FAU coach Lane Kiffin said. “Really seems like, for a young guy, that he really is in command of the offense.” Other than Nelson, the Akron offense has had a hard time getting things going as they have only 1,406 yards in the ground total and 2,872 yards in the air.

AKRON DEFENSE
Akron runs a 4-3 defense with a strong pass defense. The Zips’ 19 interceptions ties for second nationally, one pick behind FAU. They are also seventh nationally with four defensive touchdowns. When it comes to rush defense though, the Zips are lacking a bit. They rank No. 99 nationally against the run, allowing 2,564 yards on the ground and giving up 19 touchdowns. FAU running back Devin Singletary is not the back Akron wants to see.