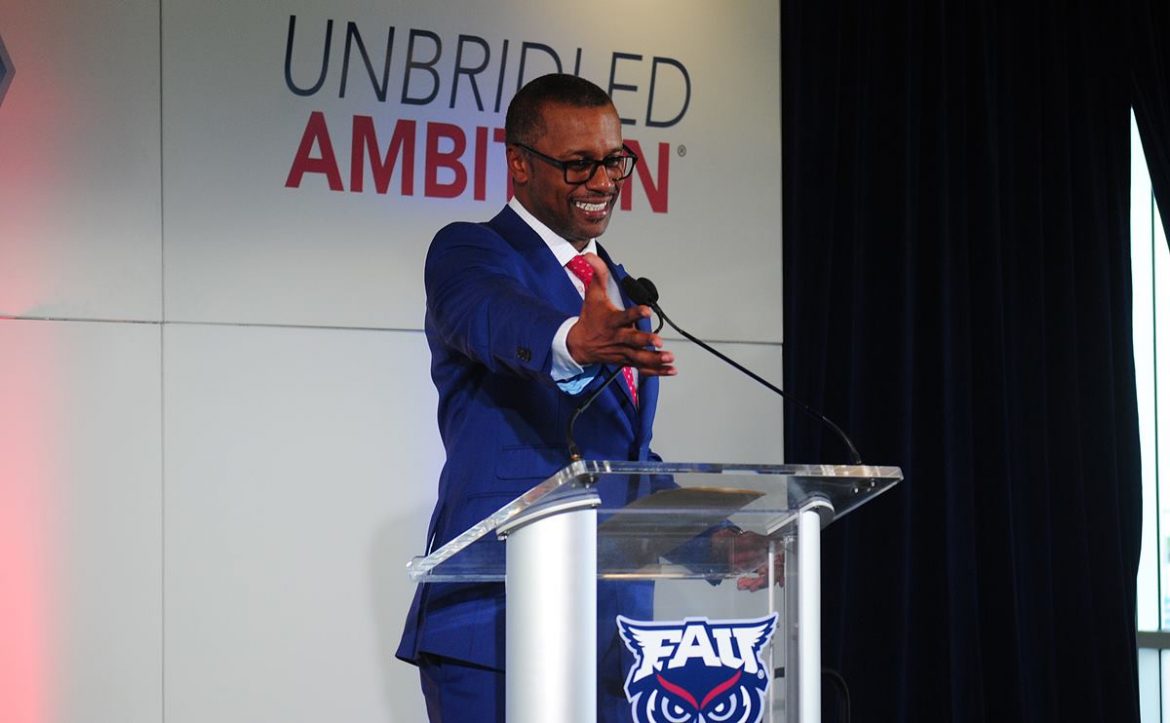 When discussing being the new head football coach at FAU, as opposed to his former job at FSU, Willie Taggart spent part of the the 24 hours prior to being formally introduced as the new Owls’ coach focusing on getting that middle letter right – saying f-A-u, rather than f-S-u.

Taneshia Taggart can be proud of her husband. He didn’t slip and mention his former school a single time during Thursday’s introduction as the new Florida Atlantic football coach.

At least, not during the part most people saw.

He did nearly slip once when discussing his new job with local media, but quickly corrected his words before even being prompted.

“I know FAU is one of the fastest growing football programs in the country,” Taggart said. “You look at what they’ve done over the last three years it’s been very impressive.”

Taggart built Western Kentucky into a winner. He won 10 games at USF before leaving to Oregon. Getting fired after only 21 games at Florida St. is nothing more than a bump in the road, FAU officials believe.

“Did we look at the last year-and-a-half at Florida St? Absolutely,” FAU athletic director Brian White said. “Do we think that defines Willie Taggart as a football coach? No, I don’t. I really do think he’s a good football coach. I think he’s proven that. I think he’s going to have a lot of success here.”

Taggart and FAU agreed in principle to a five-year contract that pays him $750,000 per year, a dollar amount that offsets part of the more than $4 million per year that FSU owes Taggart over the next four years.

He’s ready to get to work. Taggart won’t coach FAU in the Boca Bowl, leaving that task to interim coach Glenn Spencer, the Owls defensive coordinator this past season. Sources tell OwlAccess.com that Taggart has already met with Spencer about potentially remaining on the FAU staff, though neither party reached a conclusion as of Thursday night.

Taggart promised an up-tempo offense and an attacking defense.

Revising a mission statement from program founder Howard Schnellenberger, who brought Miami to power by vowing to “recruit the State of Miami,” Taggart pledged that his Owls will focus heavily on recruiting South Florida.

At one point during his podium speech Taggart acknowledged Schnellenberger, seated in the front row.

“And I’m looking over here, looking at the greatest coach, I’ve got goose bumps over here,” Taggart said. “I’m trying not to look at him because I’ getting a little choked up, but coach, thank you for being here. I can’t wait until you go in the Hall of Fame. You should have been in there already.”

During his speech Taggart reminded FAU fans that, as a Western Kentucky’s head coach in 2011, he won the first game ever played at FAU stadium, defeating the Schnellenberger-led Owls on the field that now bears the legendary coach’s name.

Following his speech Taggart made a point of making his way to Schnellenberger, speaking with the program founder and posing for pictures.