What they don’t teach in divinity school is that the replay official also has final biblical oversight.

Jason Driskel connected on a 38-yard desperation pass to Kamrin Solomon in the right side of the end zone as time expired that appeared to give FAU it’s second win of the season. Two minutes later the replay official concluded that Solomon didn’t get a foot down in bounds after being pushed by Charlotte defensive back Daquan Lucas.

For FAU, a week that saw the Owls’ relocate to Tampa to escape hurricane – Matthew forced the postponement of the game from Saturday to Sunday – ended in another bizarre loss, this time to a Charlotte team that had never beaten a Conference USA opponent.

As they have done frequently this year, the Owls put themselves in a position to lose.

In a game where Buddy Howell rushed for three scores, the offense played mostly mistake-free, and FAU really had Charlotte beat, the main reason why the Owls fall to 1-5 wasn’t that final play, but because of the same old inconsistency and failures.

“I told everyone how much I loved them, how much I appreciated how hard they’re working,” fau coach Charlie Partridge said in an emotional press conference. “At that point as a head coach, you’re reminding people of your poise and in my position, I’m keeping my emotions in check. We’re trying to do our best to do the same with these young men. It’s the same now: keep our emotions in check, continue to fight to get better, continue to build on the positive and get the negatives off the film.”

As has been the case all season, the Owls’ defense struggled to make any sort of stop on defense. A week after Trey Hendrickson emotionally told the media that this team is ‘not losers,’ every nagging problem that has plagued the Owls – injuries to the offensive line, letting up big plays on defense, the inability to rebound when calls don’t go their way – was out in full force on Sunday.

Immediately following a controversial fourth-and-short call that the referees ruled a first down for the 49ers, Charlotte quarterback Hasaan Klugh found T.L. Ford II wide open for a 37 yard touchdown to turn a 17-14 Owls lead into a 21-17 deficit with 23 seconds remaining in the first half.

As for the near-touchdown by Solomon to end the game, the third-year coach did his best to stay diplomatic.

“From our vantage point on the sideline where I was with the players, I couldn’t see if he had his foot down; I could see he made the catch, so I was asking people who had a better vantage point if he got his foot down,” Partridge said. “Some thought they did, some weren’t sure, and because you know they’re going to review it and respond with class either way. I’m proud of how hard the kids fought to win the game but we didn’t get it done.”

If there’s any positive to take away from FAU’s defensive performance, it’s that they limited a team to under 30 points for the first time in 2016. The fact still remains, however, that FAU’s defense – which looked to be a strength with playmakers like Hendrickson, Azeez Al-Shaair, and Ocie Rose – is still allowing an average of 37 points per game.

Hendrickson, who shook with anger after the Shula Bowl, made clear that this isn’t the time to wave the white flag just yet.

“Every loss hurts. I still believe we aren’t a bunch of losers and I believe that we need to correct things,” Hendrickson said after a two-sack performance. “That’s what the next week of practice is for.”

Klugh took advantage of FAU’s disappointing defense, going 14-17 with 223 yards, three touchdowns and an interception. Klugh also totaled 54 yards on the ground, marking yet another game where the Owls failed to stop a mobile signal-caller.

For the second straight week, true freshman Devin Singletary served as the 1B running back early on to Buddy Howell’s 1A, rushing for 28 yards on 7 carries. After rushing for 86 yards in the Shula Bowl, Singletary seems to have established himself as the second running back on the depth chart ahead of Kerrith Whyte and the still-missing Jay Warren – though Whyte made his presence felt later with 37 yards on 8 attempts.

Only getting two carries in the opening quarter, Howell took the first carry of the second quarter into the end zone for his seventh touchdown of the year and 10th in his collegiate career. With the score, Howell became only the fifth player in program history to record double-digit rushing touchdowns, joining Alfred Morris (27), Charles Pierre (23), Doug Parker (21), and former teammate Jaquez Johnson (19).

Howell had three rushing touchdowns on Sunday, becoming the first Owls running back since Alfred Morris to have three in a single game; Morris scored four against UAB on November 26, 2011. But for the explosive running back, the milestones took second place to the final score.

“The three touchdowns are great, but we want the W,” Howell said . “Touchdowns come when you’re doing your job – right play, right time – but at the end of the day, it ain’t about me. We’re a team and I know they wanted the W, so this hurts. Stats are stats.”

The offensive line, which lost Jakobi Smith early on for several drives, finally jelled after weeks of coaches trying to plug players in at different spots. FAU rushers averaged 4.24 yards a carry on Sunday afternoon.

TURNING POINT
With less than a minute left in the first half, what appeared to be a FAU stop on fourth-and-short was instead ruled a Charlotte first down. FAU’s defense seemed to mentally break on the next play as Charlotte quarterback Hasaan Klugh found T.L. Ford II, who had beaten press coverage by Shelton Lewis, for a 37 yard touchdown.

3 – Non-Saturday games the Owls have played in the Charlie Partridge era; FAU and FIU had their 2014 Shula Bowl on a Thursday, while last year’s Owls-Hurricanes game was a Friday night game. All three have been losses.

12 – Tackles by FAU safety Jalen Young, the most by an Owl.

28 – Yards from Devin Singletary, a week after setting a career-high with 86. After getting six carries in the first quarter, Singletary had just one in the final 45 minutes.

442 – Yards allowed by FAU to Charlotte, one of the worst offenses in the nation.

UP NEXT
The Owls leave the Sunshine State for only the second time this year, heading north for a match-up with the Marshall Thundering Herd. Kickoff will be at 7 p.m. 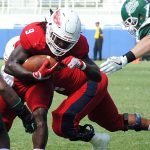 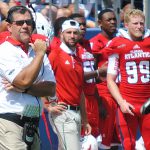 I did see some adjustments, but the same result. It was great to see the quarterbacks not getting sacked and to finally see Parr have some real action. And as far as Parr, his drives seemed to be more effective. I hope he keeps getting more time, and at this point they should even consider starting him. He still has some growing to do, but he is 10x better on 3rd down than Driskel. As mentioned in the article the Owls keeps setting themselves up to lose, that simple.