FAU’s seven game win streak, along with its six-game streak of scoring 10 or more runs, ended Sunday in a 2-1 loss at Old Dominion.

The Owls failed to get the bats going after totaling 22 runs in the first two games. Old Dominion pitchers allowed only six hits on Sunday, and one unearned run, preventing FAU from getting the sweep.

In the bottom of the seventh inning, Old Dominion’s Tommy Bell singled into left field, tying the score at 1.

The Monarchs touch reliever Mark Nowatnick again in the eighth, when Will Morgan singled into right field to bring in what turned out to be the winning run.

Moving Forward: Coletti has an 11-consecutive inning scoreless streak. Tyler Frank run his hitting streak to 14 games. …The top four batters in the lineup, Frank, Joe Montes, David Miranda and Pedro Pages, all had at least one hit.

Sliding Backward: The Owls only managed six hits. …The bottom three in the lineup – Eric Rivera, Kevin Abraham and Diamond Johnson – went 0-for-10 in the loss. The back of the Owls’ bullpen remains a concern. After nearly blowing a five-run lead late in Wednesday’s victory over North Florida, Nowatnick did blow Sunday’s lead.

Up Next: FAU goes on the road to take on the Miami Hurricanes Wednesday night at 6 p.m. 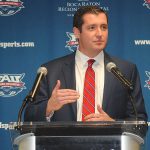 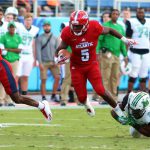