Flipping Out
Saturday's Shula Bowl rivalry game that pits FAU vs. FIU has the potential to send the Owls head over heals - in a good way.

In the minutes following the game – after being part of the mob that grabbed the Shula Bowl trophy from FIU’s sideline and returned to the FAU side – Howell made his way to the middle of the field and started doing flips.

“I don’t know where that flip’s at,” Howell said earlier this week. “That flip needs to surface.”

Coaches can say what they want about every game being of equal importance, but players still know when rivalry week hits.

Nickel back Ocie Rose originally committed to FIU before flipping to FAU on Signing Day in 2015. The Florida City native will play on the college field that’s closest to where he grew up for the first time on Saturday.

“Everyone will finally get to see me play who’s from where I’m from,” Rose said. “It feels really good going back to play.”

As with most rivalries, there’s a familiarity off the field.

For Rose, this will be his first collegiate game where he could be asked to make a play on his cousin, Maurice Alexander, a redshirt freshman quarterback. Rose said the two have spoken a couple times over the past week “just to see how everybody is doing.”

Alexander made his first career start for FIU last week. Newly-named interim coach Ron Cooper has yet to say whether Alexander or junior Alex McGough will start against FAU on Saturday.

To Rose the Shula Bowl trophy, which the Owls reclaimed with last year’s 31-17 victory and made an appearance at FAU practices this week, is more of a focus than who starts at quarterback.

Wide receiver Nate Terry, who played his high school football at South Dade, says he didn’t appreciate the extent of the rivalry until he enrolled at FAU.

Now he’s seeing emotion from his teammates as they prepare for a game that also begins FAU’s second season – Conference USA play.

“Rivalry, first conference game and the game being (in Miami) – it’s a big game,” Terry said.

Which brings the Owls’ back to the reason Howell started flipping.

FAU entered last season’s game with a 1-6 record and looking to grab hold of anything positive. The Owls played arguably their best game of the season that Halloween day, grabbing their second victory of the season.

Afterward fans joined players and coaches in celebration on Howard Schnellenberger Field for the first time in stadium history.

“It was a great feeling,” said Howell, who averaged 4.5 yards per carry that afternoon. “You see the rivalry is built up into that game. Getting the trophy back, that was amazing, man. Going across the field, taking it back, that’s just one of those feelings you can’t take away from us. This year we’re going to lock it down. We’re not going to let it go nowhere. And then I might just do another flip.”

“We’re (at FIU) so I’m going to [handle it] with class,” he added. “Go out there and try to get the ‘W’ and shake their hand and congratulate them and all that stuff and have fun with my team. I don’t know about all the flipping.”

Thereby highlighting another feature of rivalries: Players can say all the right things during the week. When the emotion of the game takes over?

Well, anyone can flip out.

Flipping Out
Saturday's Shula Bowl rivalry game that pits FAU vs. FIU has the potential to send the Owls head over heals - in a good way.
was last modified: September 30th, 2016 by Chuck King
0 comment
0
Facebook Twitter Google + Pinterest 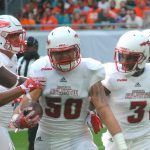 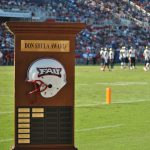 The Breakdown: The Shula Bowl