BOCA RATON – Quran Hafiz’s transition to safety didn’t start as smoothly as he would have liked.

“I was lost, kind of,” Hafiz said. “As I got more reps it came natural, it came easier to me. Just seeing everything and seeing the whole field, it felt like you can get a lot more plays back there.”

A cornerback in high school, Hafiz heard numerous coaches tell him during the recruiting process a position change could be coming at the next level.

Once at FAU, that change happened after only one practice.

“The second day of spring practice they were like, we’re going to try you out at nickle,” Hafiz said, “I didn’t see it as a surprise. I kind of felt like that was what was going to happen.”

Like most of the FAU’s defensive backs, Hafiz is relatively tall and long. At 6-feet and 185 pounds he quickly fit into FAU’s defensive scheme. As a true freshman he recorded 36 tackles, including four for loss.

This spring Hafiz is transitioning from nickel to strong safety.

“A lot of times you put them at nickel when you first get them because it’s an easier spot to play than all the roles in the back end,” coach Lane Kiffin said.

With Jalen Young and Zyon Gilbert entrenched as the Owls’ starting safeties, Hafiz is currently lined up next to Ocie Rose on the second team.

Hafiz doesn’t prefer the safety spot over nickel or vice-versa. At safety Hafiz won’t be in pass coverage as much and will be more active in run support.

That doesn’t bother Hafiz, who delivered some of FAU’s biggest hits last season.

He’ll have more opportunities to make those impact hits from the safety position.

“Safety, you bring more of an impact when you’re coming down to hit because you’ve got more speed behind you,” Hafiz said.

Making Plays: Defensive end Leighton McCarthy made the play of the day by dropping into coverage, batting a De’Andre Johnson pass into the air, then intercepting it. …Chris Tooley stripped Devin Singletary during the team run portion of practice. Jalen Young recovered the fumble. …Charles Cameron burst through the offensive line and tackled running back Silver Saunders for a safety. …Azeez Al-Shaair still isn’t cleared for contact, but he did break up back-to-back pass attempts during seven-on-seven drills. The first one came in the back of the end zone, ripping the ball out of Harrison Bryant’s arms. One play later he nearly intercepted Chris Robison. …Ernest Bagner may be the most improved player this spring. On Thursday he recorded a strip sack of Robison.

Tracking the Depth Chart: FAU offered a preview of what could well be its first-string wide receiver unit against Oklahoma, lining DeAndre McNeal and Jovon Durante wide with Willie Wright in the slot. Two walk-ons, Dante Cousart and Brandon Robinson, are working with the second team. The combination of incoming signees and some players returning from injury will likely drop Cousart and Robinson from the rotation come the fall, but for the time being both are enjoying productive springs.

QB Battle: Early in spring Kiffin chastised Robison and Johnson for throwing too many interceptions. He’s seen an improvement in recent practices. “It’s good to see those guys are kind of maturing in that position, doing a better job of taking care of the ball,” Kiffin said.

Instant Message: “They do not need to have helmets, the campers. Hopefully a lot of parents will bring their kids out for a great camp and a great benefit.” – Kiffin discussing the youth football clinic that will follow Saturday’s practice at Carter Park. Proceeds benefit the victims of February’s Parkland-Douglas school shooting. 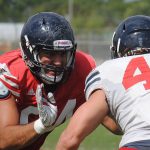