Trialing 3-2 in the ninth, Gunnar Lambert blasted a three-run homer to propel FAU past Rice in Houston.

“I thought that that was a really gutsy performance by our guys,” FAU coach John McCormack said.

Leading 5-3, FAU nearly surrendered the game in the ninth. Rice loaded the bases in the final frame before closer Zach Schneider induced ground-out to clinch a series win for the visiting Owls.

FAU starter Vince Coletti surrendered three runs in the third but that would be all the runs Rice would score.

Florida Atlantic scored one run in the sixth on an RBI double by Kevin Abraham and another in the seventh on an Eric Rivera single.

“It was apparent that Vince didn’t have his best stuff, he gave up three runs in the third, but just gutted it out,” McCormack said. [Jordan] Poore was really good, and Zach [Schneider] got through his inning to nail down the save.”

Moving Forward: Gunnar Lambert’s game-winner was his fifth home run of the season. …Cody Wilson’s single in the sixth extended his hitting streak to 12 games. …Tyler Frank was hit by a pitch in the eighth, and now has reached successfully in 33 straight contests. …Poore threw two scoreless innings.

Up Next: FAU goes for the sweep of Rice on Sunday at 2 p.m. Mark Nowatnick gets the ball for FAU against Rice’s Matt Canterino. 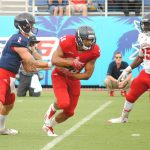