Football Fathers
Rahsaan Lewis, son of NFL linebacking great Ray Lewis, says he is joining a growing list of players with famous football fathers who are transferring to FAU.

BOCA RATON – The FAU football players’ parent tailgate area is sounding more and more like it will be a hall-of-fame hangout this fall.

Rahsaan Lewis, the son of NFL Hall of Fame linebacker Ray Lewis of University of Miami and Baltimore Ravens fame, is the latest player with a famous football father to announce he’ll be playing at FAU.

As a freshman walk-on defensive back at UCF last season Lewis played in seven games, recording four tackles. He moved back to his more natural position of wide receiver in the spring, the position he’ll play at FAU, and caught four passes for 101 yards in the UCF spring game. The total included a 75-yard touchdown.

The 5-foot-11, 190-pound Lewis will be walking on at FAU and expects to be eligible to play immediately.

“I love my [UCF] teammates,” said Lewis, who chose FAU over Memphis and Charlotte. “I love the team. I feel like it just wasn’t the best fit for me.”

Lewis joins a growing list of lineage players electing to play for Lane Kiffin at FAU.

Lewis called it “ironic” that so many players with famous fathers have pledged to play at FAU in recent months, but the decisions of Sapp, Owens and Gore didn’t play a large role in his decision.

“Honestly, the biggest thing for me was just signing at a place that felt like home,” Lewis said.

Though he lived in the Orlando area, Lewis’ father owns a residence in Boca Raton which allowed him to spend time in recent years on the Owls’ Boca Raton campus. 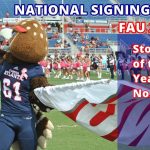 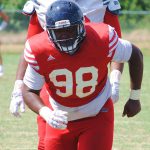