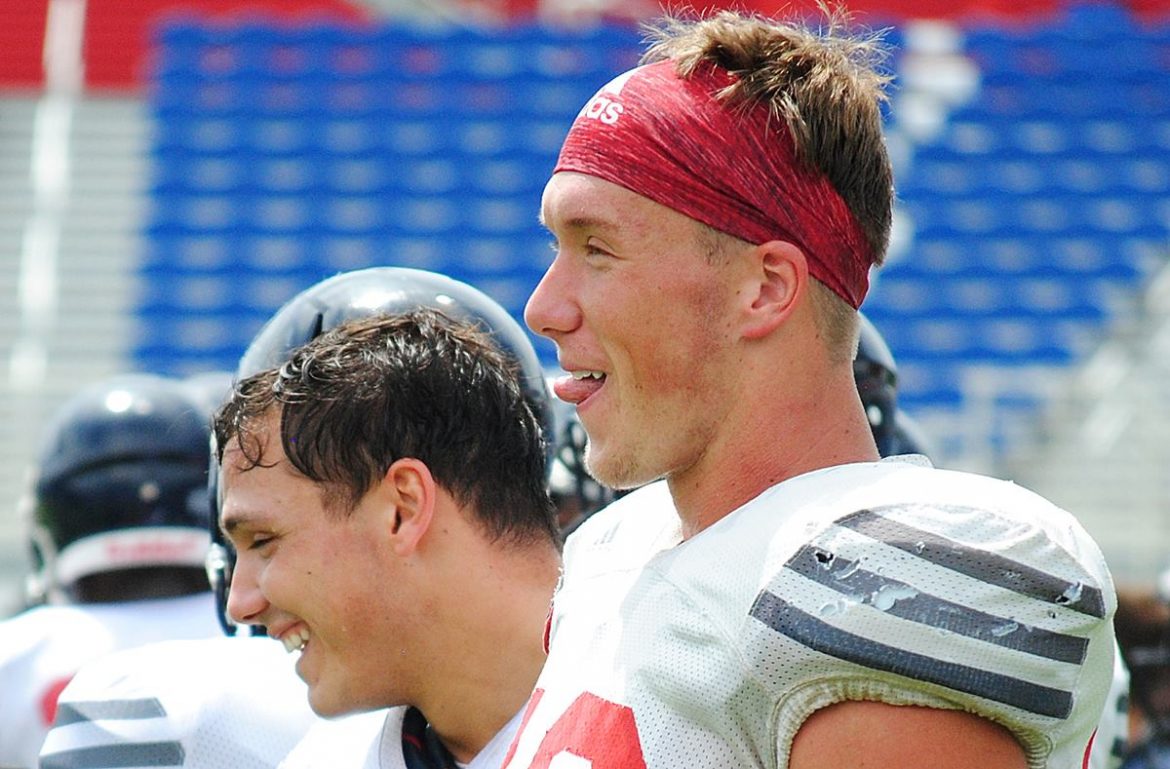 BOCA RATON – Harrison Bryant won’t be sneaking up on opponents this season.

Not that the 6-foot-5, 240-pound tight end is capable of sneaking up on anyone.

Bryant, a senior, could easily find himself in a peculiar position this season. In and era where spread offenses are so popular that some teams don’t even have tight ends, Bryant will likely be the FAU player opposing defenses scheme to stop on Saturdays.

He’s not the Owls’ lone threat at tight end, however.

John Raine, also a senior, played well in spurts throughout his career, and is particularly threatening near the goal line.

Listed at 6-foot-2, 230 pounds, Raine isn’t as big as Bryant but he doesn’t lack toughness. He’ll frequently line up in backfield as an H-back, providing a lead blocker for whichever Owl running back gets the call.

With the Owls short of wide receivers during the spring, coach Lane Kiffin frequently employed two-tight end sets, and both Bryant and Raine responded well.

There’s no reason to expect that Kiffin and offensive coordinator Charlie Weis will abandon that look in 2019.

DEPTH CHART
Harrison Bryant (6-5, 240, Sr.): The player known as “Harry B” picked up a new nickname from running backs coach Kevin Smith following a standout set of spring practices: “The Franchise.” Bryant use his rare combination of speed, size and good hands to catch 45 passes, covering 662 yards while scoring four touchdowns – all second most among Owls last season. Recently named to the Mackey watch list, an award presented to the nation’s best tight end, Bryant has 83 catches for 1,133 and nine touchdowns in his career.

John Raine (6-2, 230, Sr.): More of a blocker than Bryant but still possessing excellent hands, Raine played in all 12 games last season, catching 10 passes for 99 yards and a score. With FAU searching for playmakers at running back and wide receiver, Raine should see an expanded role this season.

KEY ADDITIONS
Rahmod Smith (6-5, 220, Fr.): Tall and athletic like Bryant, Smith played high school basketball before switching to football. The brother of senior linebacker Rashad Smith, Rahmod could contribute this season, but if Bryant and Raine remain healthy Kiffin will likely opt to redshirt him.

KEY LOSSES
D’Anfernee McGriff: FAU never could find a position for McGriff. After failing to earn significant playing time at wide receiver, tight end and running back, McGriff elected to transfer, concluding one of the more disappointing FAU careers with a whimper.

BREAKOUT CANDIDATE
Logan Peterson (6-3, 230, R-So.): Peterson’s main contributions thus far have come primarily on special teams. He enjoyed a strong start to spring practices, but missed almost the entire second half of spring after landing in the hospital with a staph infection. A healthy Peterson should be in the mix for significant time this fall.