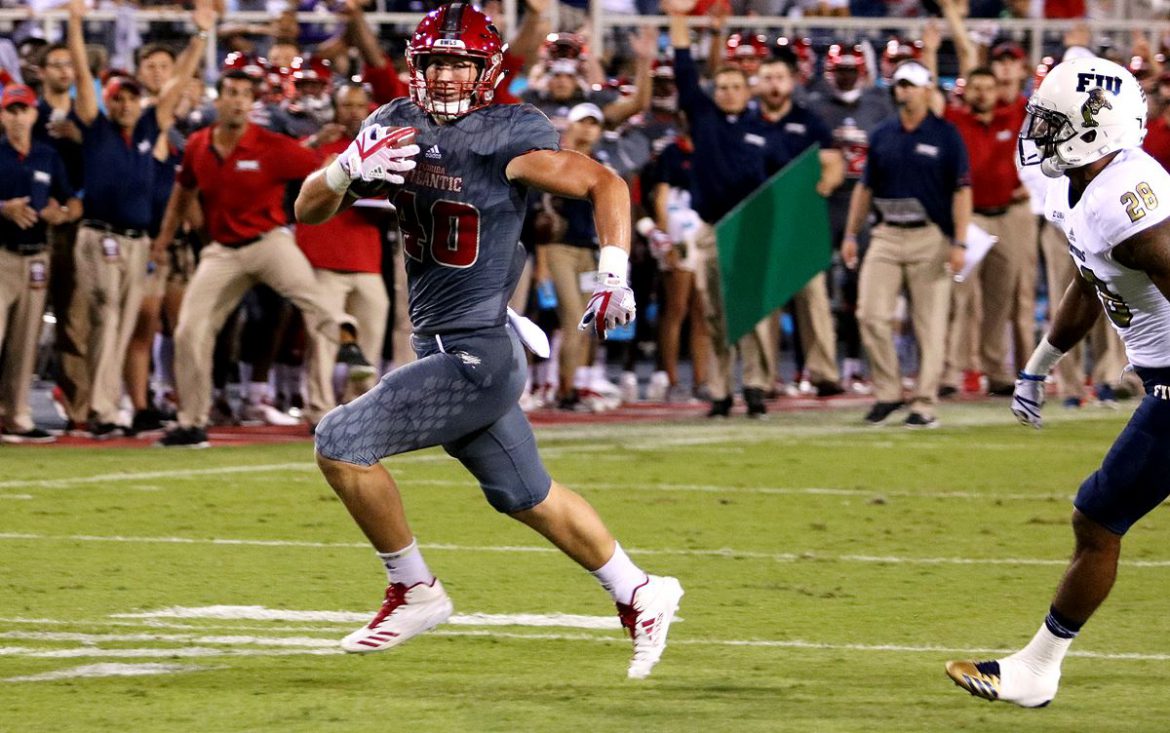 FAU tight end Harrison Bryant races toward one of his five touchdowns in 2017. (Photo by Bongo)

BOCA RATON – At a time when many college football offenses are dispensing with tight ends, FAU’s continue to thrive.

Harrison Bryant, named a preseason All-Conference USA selection on, is next in line among the Owls’ prolific tight ends.

Bryant’s 32 catches and 408 receiving yards were third most among Owls despite his missing the final three games of the season with a broken foot. He returned for spring practice, showing he hadn’t lost a step.

At, 6-foot-5 and 240 pounds, Bryant represents a large target in the middle of the field. He also possesses the speed to make opposing defenders cheating to stop the run pay. Throw the ball his way and Bryant will catch it.

Bryant’s backup, John Raine, impressed enough early last season that the Owls didn’t hesitate to incorporate him into their offensive sets. He’s primarily a tight end, but can line up as an H-back when needed.

The work of Bryant and Raine in the middle of the field complements the speed of FAU’s outside and slot receivers. Bryant, especially, represents the kind of player defensive coordinators need to account for.

DEPTH CHART
Harrison Bryant (6-5, 240, Jr.): A second-team All-Conference USA selection last season, Bryant’s five touchdown catches were second most among the Owls. He’s a threat in the red zone and can also make moves in open space. As he continues to add bulk, Bryant has grown into a better blocker, too. He’ll be the best all-around tight end in Conference USA.

John Raine (6-2, 235, Jr.): If Bryant needed to miss any time, the Owls would lean on Raine – and there wouldn’t be much of a drop in production. He has good hands and is a threat near the goal line. Raine isn’t as big as Bryant, but he brings toughness. Last season Raine caught six passes covering 50 yards, with all the catching coming once FAU began C-USA play. He’s still looking for his first collegiate touchdown. Maybe a switch from No. 30, which he wore during his first two seasons as an Owl, to No. 10 will help with that quest.

Jacob Wilson (6-4, 245, R-Sr.): Wilson’s FAU career hasn’t amounted to much statistically. He’s been primarily a special teams player, with most of that action coming last season. Though not exactly huge, Wilson is the bulkiest of FAU’s tight ends. He’ll likely be employed primarily as a blocker on short yardage and goal line sets.

KEY ADDITIONS
None: FAU elected not to sign a tight end as part of its 2018 signing class. The Owls also didn’t bring in any major transfers. That’s a testament to how comfortable they feel with their current group.

KEY LOSSES
Dustin Bowens: He only caught one pass while at FAU, but Bowens made his presence felt as a blocker in short yardage and goal line situations.

Chase Lasater: The sophomore is still with the team, but he switched positions. Lasater will play linebacker this fall. 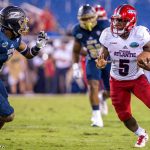