Offensive Progress
FAU's defense didn't dominate the second fall scrimmage like it did a week ago, but Lane Kiffin still praised the first team unit as looking "really good."

BOCA RATON – FAU’s defense once again proved its ahead of the offense, but Saturday’s second fall scrimmaged showed the offense is gaining ground.

The Owls scored five offensive touchdowns during a scrimmaged shortened by weather to about half the amount of plays originally scripted.

What can FAU take away from the second spring scrimmage? Our Scrimmage Six Pack has the answers.

Still Undecided at QB: The Owl seem to be closing in on a starting quarterback, but Kiffin said he’s not yet ready to make the call. “We’ll go back and look at this but I doubt it,” Kiffin said of his readiness to name a starter. “Especially with the shortened scrimmage.”

Of those vying for the starting role, Chris Robison clearly delivered the better outing. Robison tossed two touchdown passes – both to tight end Harrison Bryant. After enjoying a couple good days of practice leading up to the scrimmage, Nick Tronti didn’t lead the offense to a score, threw an interception to Da’Von Brown and fumbled a hand-off exchange. Justin Agner, the third QB in the battle, remains ill. He hasn’t participated in a practice since the first scrimmage, held the previous Saturday. With Trent Wessel not dressing on Saturday because of a minor administrative issue, true freshman Javion Posey piloted the third team offense, showing great touch on a 36-yard TD pass to Ronald Patterson. He also showed patience on a screen pass to Daniel Leconte that went for a score.

WR Moves: Posey may be the Owls’ future at quarterback, but his present could be at wide receiver. Kiffin said he approached Posey on Friday about moving to wide receiver for this season and the uber-athletic 6-foot-1, 185 pounder eagerly agreed. “I think he’ll be a really good quarterback here, but instead of sitting, redshirting, and not doing anything, let’s put him at wide receiver and see if he can help us,” Kiffin said.

Posey could be a great addition to the thin wide receiver unit, but Saturday may be remembered for subtraction. No. 1 wide receiver John Mitchell made a leaping grab along the sidelines late in the scrimmage but landed awkwardly on his elbow. He walked off the field holding his left arm in a manner that would suggest a shoulder injury and didn’t return.

A Real Kick: Vladi Rivas enjoyed his best kicking afternoon of the fall, connecting on field goals of 38, 48 and 50 yards. The news wasn’t all positive for the Owls, however. Punter Sebastian Riella, who also holds on field goals, needed to be helped off the field with an apparent leg injury after a hit along the sideline on a fake field goal attempt.

Line Change: As we have been reporting much of the week, Doug Johnson appears to have replaced Marquice Robison as the front-runner to start at right tackle. Johnson, who moved from backup left tackle to the right side this week, took the initial reps with the ones. Robinson began the day as the second-string left tackle but did eventually get some snaps with the first team. Overall, Kiffin wasn’t pleased with the offensive line’s play. Robison’s decision making under pressure pleased Kiffin, who quickly added, “At the same time, we’re not protecting well enough because that’s happening too many times.”

Big Bryant Target: Tight end Harrison Bryant will never be more open than he was for his first touchdown of the afternoon, when a blown defensive assignment left him running uncovered down the field, whooping at Robison to get him the ball. Bryant eventually needed to sidestep safety Armani Adams, which is did easily before strolling into the end zone.

For the duo’s second TD, Bryant adjusted his corner jump ball route to move to the inside of safety Jordan Helm. Robison originally thought he overthrew the pass, but Bryant easily adjusted and came down with the ball in bounds. Get accustomed to seeing that once the season starts. Few Conference USA defenses can defend that play.

Hosea Can See Playing Time: Reserve linebacker Hosea Barnwell’s play has to be included among the biggest defensive positives during camp. He’s been getting his hands on passes throughout the first two weeks and recorded at least one sack on Saturday. With JUCO transfer Caliph Brice and former running back Chase Lasater both missing the scrimmage because of undisclosed injuries, true freshman Antarrius Moultrie lined up next to Barnwell on the second team and once again showed an affinity for delivering big blows. The Owls secondary, however, did take a hit when second-string safety Teja Young left the scrimmage during the opening plays with an undisclosed injury. 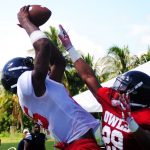 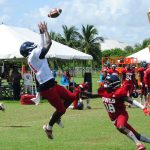