New Year, New Adger
After struggling through a terrible 2017-18 season, senior Anthony Adger has become the Owls' most reliable player, doing so when FAU needs him most.

So far he’s been more than up to the challenge.

Adger has been on a tear of late, leading FAU with a 22-point scoring average over the last six games, including a career-high 33 in Saturday’s win at Middle Tennessee. But it’s been his efficiency that’s stood out the most.

“I think now he just has so much confidence in himself that it’s just clicking.”

After shooting a mere 33 percent from the field last season, Adger upped his shooting percentage to 40 percent in 2018-19 – despite more defensive attention being paid his way. He’s also knocking down 37 percent of his three-pointers – a 26 percent increase from a season ago.

“He’s doing a lot for us,” FAU coach Dusty May said of Adger. “He’s defending at a high level, his rebounding is improving, and obviously he’s scoring at a high clip.”

Adger said playing in May’s fast-paced system is extracting the best out of his game. That, along with the results of an offseason spent improving his jump shot, is paying dividends for an FAU team hampered by season-ending injuries to standouts Jailyn Ingram and Jaylen Sebree.

“It was a blessing,” Adger said of becoming FAU’s new offensive focal point.

WORKING HIS WAY BACK

After missing time with an early-season knee injury, swingman Xavian Stapleton returned against Middle Tennessee to pour in eight points in 14 minutes. May said Stapleton won’t be on a strict minute restriction this week, but the Owls will monitor his health to ensure he stays in the lineup the rest of the way.

GROWING UP ON THE FLY

Young players like Michael Forrest, Madiaw Niang and Richardson Maitre are seeing their minutes multiply in lieu of injuries to some of FAU’s key contributors. May said their accelerated progression is a positive for his team’s outlook. “It benefits the program long term that we have guys playing much larger roles,” May said. “When you’ve played significant minutes you know how fast the game is. You know how hard it is to win every single night. So just looking into the future, it’s going to help these guys by just playing more significant roles.”

FAU is undefeated through five home games this season and can make it six Thursday night with a win against Old Dominion. The Monarchs are the first Conference USA team to travel to Boca Raton this season. 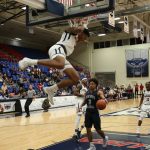