Kiffin’s deal is believed to be for five years beginning with a little less the $1 million per year. That would make him the highest paid coach in Conference USA.

FAU is expected to formally introduce Kiffin at a 10 a.m. press conference on Tuesday.

Kiffin spent the past three seasons as Alabama’s offensive coordinator. Prior to that he’d been the head coach of USC, Tennessee and the NFL’s Oakland Raiders.

With Kiffin designing and calling the offense, Alabama won the national title last season and is the favorite to do so again this year. He is expected to coach Alabama through this year’s playoffs.

Talks between Kiffin and FAU heated up on Friday, but the two sides came to an impasse late Friday night. Those talks re-kindled on Sunday and the pair came to an agreement on Monday morning.

The FAU coaching spot came open when the Owls relieved Charlie Partridge of his head coaching duties after his third 3-9 season in as many years. Kiffin with be the fifth coach in FAU program history and the second with a national championship ring.

Howard Schnellenberger, who won the 1983 national title with Miami, founded the FAU program. 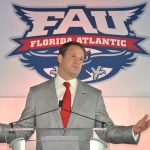