Motor to NFL
FAU RB Devin Singletary, the back nicknamed "Motor," announces he will skip his senior season and make himself available for the NFL Draft. 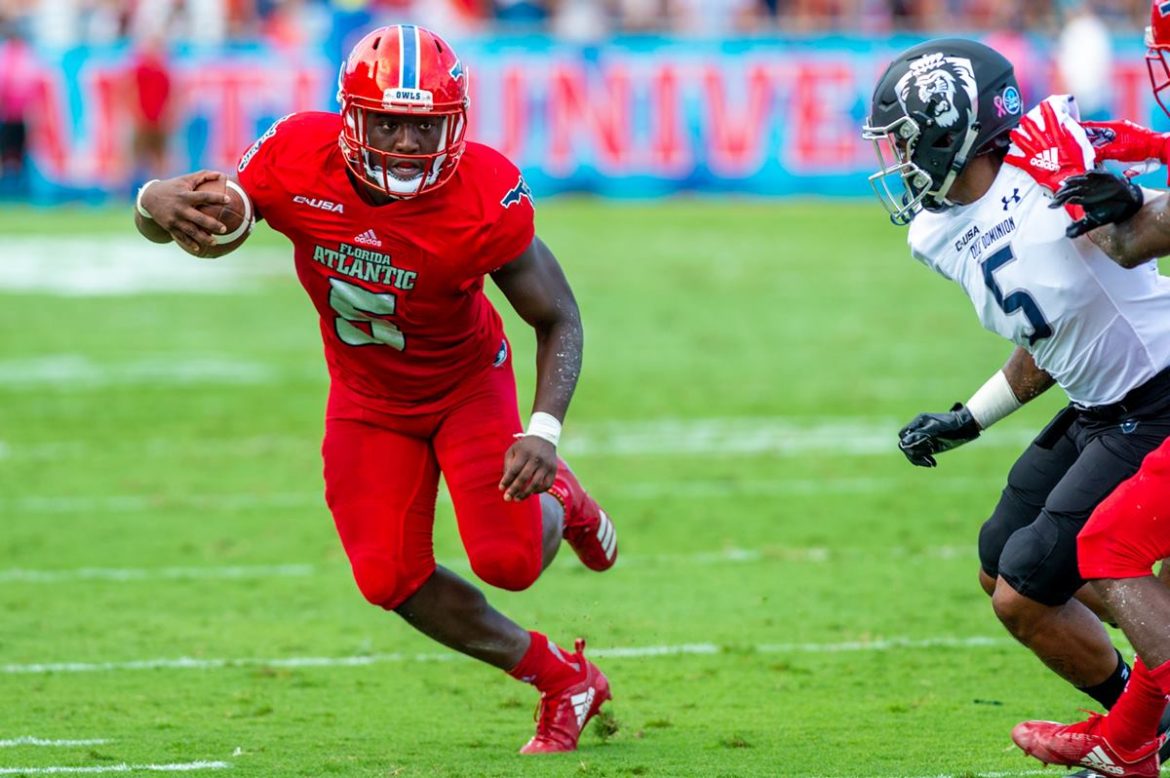 FAU RB Devin Singletary rushed for 168 yards and two touchdowns in the Owls' victory over ODU., (Photo by MaxxJaxx)

BOCA RATON – FAU running back Devin Singletary ended speculation on Wednesday by announcing he will forego his senior season and make himself available for the NFL draft.

“After much prayer and discussion with my family and coaches, I have decided to enter the NFL Draft,” Singletary wrote in a post addressed to Owl nation. “I hope I have left a lasting impression on The University, football program and the entire community. As I take the next step in my career I will continue to represent FAU in the right way and you will forever be in my heart.”

What Singletary accomplished at FAU will not soon be forgotten. In three seasons he became the program’s all-time leading rushing, darting to 4,299 yards. His 66 rushing touchdowns are easily the most in program history.

As a sophomore, Singletary rushed for 32 touchdowns. Only two running backs in NCAA history ever scored more times on the ground in one season. He missed becoming the first FAU player to rush for 2,000 yards in a season by only 80 yards that season.

Singletary, and FAU’s offense as a whole for that matter, experienced a drop-off this season as opposing defenses geared up to stop him, but he still managed to find the end zone 22 times – tied for the lead nationally entering bowl season. His 1,348 yards this season will likely be enough to lead C-USA for the second consecutive season. UAB ball carrier  Spencer Brown needs 200 yards in next week’s Boca Raton Bowl to surpass Singletary.

It took Singletary only three season to become the sixth most prolific player in NCAA history with regard to rushing touchdowns.

On Tuesday the Sporting News named Singletary a second-team All-American for the 2018 season.

Singletary is the second FAU underclassman to leave early for the NFL draft. Both announcements came in the past week. Wide receiver Jovon Durante also announced his decision to enter the NFL draft.

When selected, Singletary will become the third FAU running back to play in the NFL, joining Alfred Morris, currently with the San Francisco 49ers and former backfield mate Buddy Howell, now with the Houston Texans.

Motor to NFL
FAU RB Devin Singletary, the back nicknamed "Motor," announces he will skip his senior season and make himself available for the NFL Draft.
was last modified: December 12th, 2018 by Chuck King
0 comment
0
Facebook Twitter Google + Pinterest