More Movement
Already shuffled once, FAU's starting offensive line may be dealing with another change.

Matt Weiner (right) looks for a block as Daniel Parr receives a snap during a fall scrimmage. (OwlAccess.com photo)

BOCA RATON – Juggling his line once, maybe twice, in a four-day span isn’t the way FAU offensive line coach Garin Justice would have preferred to spend the week leading to the season opener.

It wasn’t totally unexpected, either.

Matt Weiner may be the latest Owl to move into a starting spot on an offensive line that, when fall camp ended last week, had appeared to have emerged powerful and injury free.

Weiner spent the final portion of Tuesday’s and Wednesday’s practice working with the first team at right guard – a spot usually occupied by Antonyo Woods.

A walk-on, 6-foot-4, 275-pound redshirt-sophomore, Weiner spent much of fall camp at tackle but he’s also worked on the interior of the line for FAU.

“We put him at guard a lot in spring,” Justice said. “We always consider Matt as kind of our Band-aid guy because he’s a guy that does everything the right way and he’s really a student of the game.”

Offensive coordinator Travis Trickett indicated that Weiner earned the moniker “Wein-Dog” in part because of his rabid focus.

“You never know when he’s happy because he always looks mad,” Trickett said.

Earlier this week FAU shuffled three other players along the line to compensate for the loss of left tackle Reggie Bain, who was seriously injured in a motor scooter accident on Friday and is expected to miss the season.

Roman Fernandez, who was slated to be the starting center last season before concussion-like symptoms in the final week of camp ended his season, is moving from starting left guard back to center.

If Woods doesn’t return to the lineup, left tackle Kelly Parfitt would be the only FAU offensive lineman starting in the same position he was playing when fall camp ended last week.

“It’s different but I’m sure everything is going to work out fine,” Fernandez said. 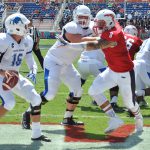