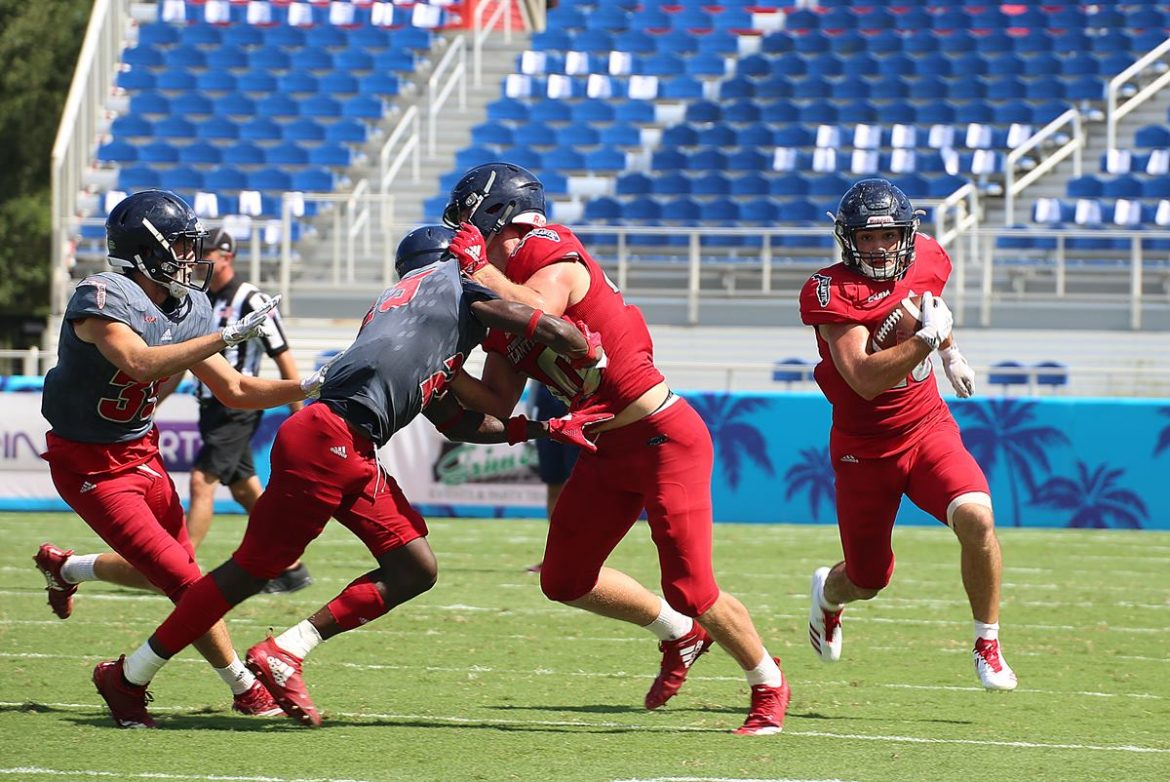 Harrison Bryant seals the edge for fellow tight end John Raine, who race down the sideline for a big gain in the FAU spring game. (Photo by Sage Pacetti)

Tight ends Harrison Bryant and John Raine are frequently lining up outside and in the slot, towering over the defensive backs opposite them. And that size advantage is proving invaluable.

Tronti’s words materialized in FAU’s spring game. Bryant and Raine caught a combined 10 passes, including both of the red team’s two touchdowns.

FAU coach Lane Kiffin said splitting out his athletic tight ends creates a “mismatch issue” in the pass game. But their impact as blockers in those packages is equally important.

That’s because FAU likes to stretch the field horizontally – using jet motion and receiver screens, for example – to open up downfield shots. For those perimeter plays to work, however, the play-side receivers must hold their blocks. FAU struggled with that at times last season, as top targets Willie Wright (5-foot-8, 155 pounds) and Jovon Durante (6-foot, 165 pounds) were relatively undersized.

“Think about the difference between Willie trying to block a guy and Harrison,” Kiffin said. “So, that’s a big bonus for us.”

One of FAU’s most utilized plays is the “touch” pass coming off jet motion. The slot receiver – usually Wright – runs inside pre-snap, flying in front of the quarterback to receive a quick forward toss.

To gain chunk yardage in those situations, the play-side receiver has to seal his defender inside and give the ball carrier a clean angle to the sideline. The play will be stuffed every time that critical block isn’t executed properly.

But luckily for FAU – and unluckily for opposing defensive backs – Bryant and Raine have the size and physicality to dominate at the point of attack, especially when the perimeter players they’re blocking now are tiny juxtaposed with the front seven defenders they’re accustomed to facing.

“We should be able to dominate on the perimeter, that’s the main reason why we’re out there so much: to block for those guys and all the athletes we have,” Raine said.

Bryant and Raine are no strangers to playing out wide. They both did it in high school, so their increased usage flexed out was more getting back to their roots than starting something new. But Bryant let his position coach, Clint Trickett, know he wouldn’t mind putting his hand back in the dirt every now and then.

“I kind of joke with coach Trickett sometimes, like ‘I need to go back in before I forget how to do some other stuff,’” Bryant said. “But it’s good getting to go out and just expand my game.”

Mismatching
By positioning his tight ends wide in the formation this spring, FAU coach Lane Kiffin is creating both receiving and blocking mismatches for the Owls.
was last modified: April 17th, 2019 by Wajih Al Baroudi
0 comment
0
Facebook Twitter Google + Pinterest 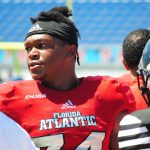 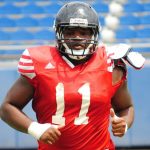