Midseason Review:
FAU Defense
Rashad Smith is becoming a star, James Pierre is breaking out and keep an eye on the FAU defensive tackles in the second half. 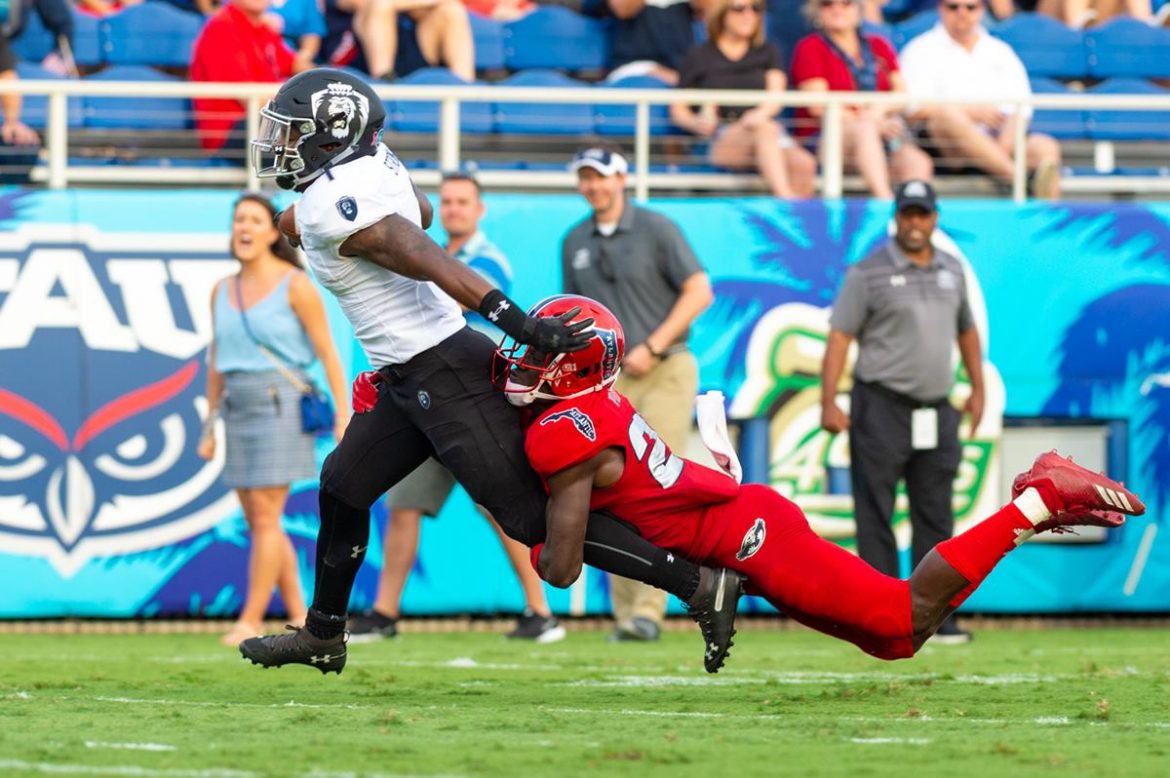 BOCA RATON – FAU entered the 2018 season prepared to rely on a veteran defense to win games. It’s taken a while, but that defense is beginning to live up to its billing.

Oklahoma and UCF, two teams currently ranked among the Top 11 in the country, took advantage of the Owls’ poor tackling and secondary breakdowns.

The Owls began playing better upon entering Conference USA play, performing well enough at MTSU to give FAU a chance at victory; then overcoming some mistakes against Old Dominion to ensure a win.

So, what went right and what went wrong for FAU in the first half? Glad you asked. Today our Chuck King and Wajih AlBaroudi tackle the defensive side of the ball in our mid-season FAU Football review.

DEFENSIVE MVP
King: Rashad Smith. Ask prior to the season’s first snap and the answer would have almost certainly gone to either linebacker Azeez Al-Shaair or safety Jalen Young. Maybe if defensive end Hunter Snyder raced to a fast sack start he could have joined the conversation. But Al-Shaair still doesn’t look right following offseason Tommy John surgery, and both Young and Snyder were slowed by injuries. Meanwhile, Smith, a junior, has excelled, leading the Owls in tackles (51) and interceptions, with three.

AlBaroudi: Rashad Smith. His fellow linebacker Azeez Al-Shaair was the more nationally recognized player coming into the year, but Smith has proven to be a fantastic player in his own right. He has single-handedly stifled opposing rushing attacks this season, shooting the gaps hard to lead FAU in both tackles (51) and tackles for loss (4.5) through six games. His work on passing downs has been superb as well. Smith leads the Owls with three interceptions and added a sack against UCF. The 2018 season has truly been Smith’s coming-out party to the college football world.

BREAKOUT PLAYER
King: James Pierre. Surprisingly enough, another fairly obvious choice. Pierre, a sophomore, is playing both corner and nickel working his way into what appeared six weeks ago to be a set starting lineup at those positions. Pierre is currently tied for third among Owls in tackles with 27, and is making a name for himself with hits that literally send ball carriers head over heels.

AlBaroudi: James Pierre. A second-year converted safety, Pierre has been unquestionably the most dynamic FAU defensive back through six games. After starting the year as a reserve, Pierre’s tackling skills earned him a start in the Air Force game, and after a strong performance against the Falcons he’s been a lineup fixture since. His 6-foot-2 frame and physicality allow him to match up with big receivers on the outside, but he also has the speed and lateral quickness to keep up with smaller receivers in the slot. His positional versatility and ferocity in run support has been an X-factor for FAU defensively.

HIGH POINT
King: FAU’s fourth-quarter play in the Owls’ victory over ODU. It’s a bit of an unconventional choice, considering the Owls actually allowed two touchdowns during the final 15 minutes, but one of those came with the game pretty much decided. In recent years – in fact as recently as the previous week – the Owls caved late in close games. But after the defense surrendered a touchdown run in the opening minutes of the fourth quarter, FAU’s offense got those points back and then the defense stepped up by forcing a turnover. The Owls weren’t really challenged again.

AlBaroudi: Holding then-No. 16 UCF scoreless on three-straight possessions in a tight first half. After the Owls stumbled to an early two-touchdown deficit, the defense stepped up and played its best football of the year. Over the next three drives FAU forced two three-and-outs and a turnover on downs on the Knights, giving the ball back to its offense which punched in two Devin Singletary scores and a field goal to take a 17-14 lead with less than two minutes remaining until halftime.

LOW POINT
King: The middle of the UCF game. FAU rallied to take a 17-14 lead over the then-No. 16 Knights and appeared ready to head into halftime with a lead. But UCF abused FAU’s shoddy two-minute defense, moving 78 yards in a little more than a minute for a touchdown that gave the Knights the halftime lead. UCF opened the second half with two touchdowns in the first eight minutes and suddenly any thought of an FAU upset disappeared.

AlBaroudi: Receiving a first-half beatdown from Oklahoma. It took just 16 plays for the Sooners to score their first 28 offensive points on the Owls, moving the ball with ease in a game that got out of hand within minutes of the opening kick. Oklahoma quarterback Kyler Murray hit Marquise Brown deep on a walk-in 65-yard touchdown to put his team ahead 42-0 before the halftime whistle, and was pulled for the rest of the game after tossing 209 yards and two scores on only nine completions.

PLAY OF THE SEASON
King: Shelton Lewis’ interception against ODU. With FAU attempting to protect a 12-point lead and the Monarchs already in Owls’ territory, Blake LaRussa fired a pass toward the sideline. As his receiver fell down, Lewis corralled the pass, tapping his toes in bounds to thwart the threat. The interception was the first for Lewis on the season and prevented a late collapse.

AlBaroudi: Rashad Smith’s game-clinching interception against Air Force. After owning a comfortable 33-20 lead on the Falcons with less than a minute remaining, FAU had a massive turn of events. It had a punt blocked and returned for a touchdown, and lost the ensuing onside kick to give possession back to Air Force with a chance win the game. With the Falcons down six at midfield, Steven Leggett busted through the middle of the Air Force offensive line to force quarterback Isaiah Sanders out of the pocket, the pressure caused him to throw a duck right into the hands of Smith to seal the Owls’ victory.

SECOND HALF BREAKOUT
King: Marcel Southall. Pretty much figured I’d be taking a defensive lineman here, and the choices came down to two players. Wajih will take care of the second one. Southall’s playing time has increased dramatically as the season progressed in part because he’s producing. The junior college transfer is only credited with three tackles to start the season. More are coming. For what it’s worth, we didn’t elect to name a comeback player, but if we did it would be Ray Ellis, who’s returned from consecutive season-ending knee surgeries to record nine tackles. He, too, is earning more playing time at a crowded defensive tackle spot.

AlBaroudi: Noah Jefferson. A former USC Trojan, Jefferson was set to attend Ole Miss this past February, but complications in his admission resulted in him joining FAU a couple weeks into the 2018 season. Jefferson appeared in his first game with the Owls this past Saturday, notching a tackle on limited snaps. At 6-foot-5, 330 pounds, he has the frame to be an absolute force at the point of attack for the Owls. If the former blue-chip recruit continues to improve his conditioning and get acclimated with the playbook, he can eat up double-team blocks on the interior and open up the rest of the defense to make plays behind him.

Midseason Review:
FAU Defense
Rashad Smith is becoming a star, James Pierre is breaking out and keep an eye on the FAU defensive tackles in the second half.
was last modified: October 9th, 2018 by FauOwlAccess
0 comment
1
Facebook Twitter Google + Pinterest 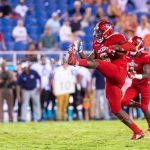