Magical Massey
Justin Massey barely beats the buzzer with a three-pointer to give FAU a 63-62 victory over Rice.

Trailing by two with 3 seconds remaining and needing to go the length of the court, FAU inbounded the ball to Payton Hulsey, who advanced it to near mid-court before spotting Massey on the right side.

Massey caught Hulsey’s pass and, all in one motion, launched a contested 30-footer that sailed through the net without touching the rim.

Teammates raced off the bench to mob Massey in the corner of the gym.

FAU needed Massey’s heroics because seconds prior Rice’s Connor Cashaw drained a pull-up jumper from the foul line over Hulsey.

Moving Forward: The game-winning shot gave Justin Massey 18 points. Massey, however, only hit four of his 13 field goal attempts prior to that shot. …Gerdarius Troutman had 10 points on 3-of-7 shooting from behind the three-point line. …Starting point guard Payton Hulsey didn’t score – he only took one shot – but he grabbed seven rebounds and doled out five assists – including one on the game-winning shot. …FAU out-rebounded Rice 41-34.

Moving Backward: Starters Jailyn Ingram, William Pfister and Hulsey combined to score 11 points. FAU appears to have an excess of role players and not nearly enough scorers. …Hulsey and Anthony Adger combined to score two points in 43 minutes. Opposing defenses simply don’t have to worry about FAU scoring from the point guard spot.

Key Stat: 1 – field goal over the final 9:30 made by an FAU player not named Delph prior to Massey hitting the game-winner. With any offensive production at all, the Owls wouldn’t have needed Massey’s heave to win it.

Up Next: FAU returns home to face Louisiana Tech on Thursday. Tip-off at The Burrow is scheduled for 7 p.m. 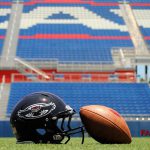