Decision Looming?
The contract of FAU offensive coordinator Kendal Briles expires after this season. With all the national coaching changes, could his name enter the rumor mill? 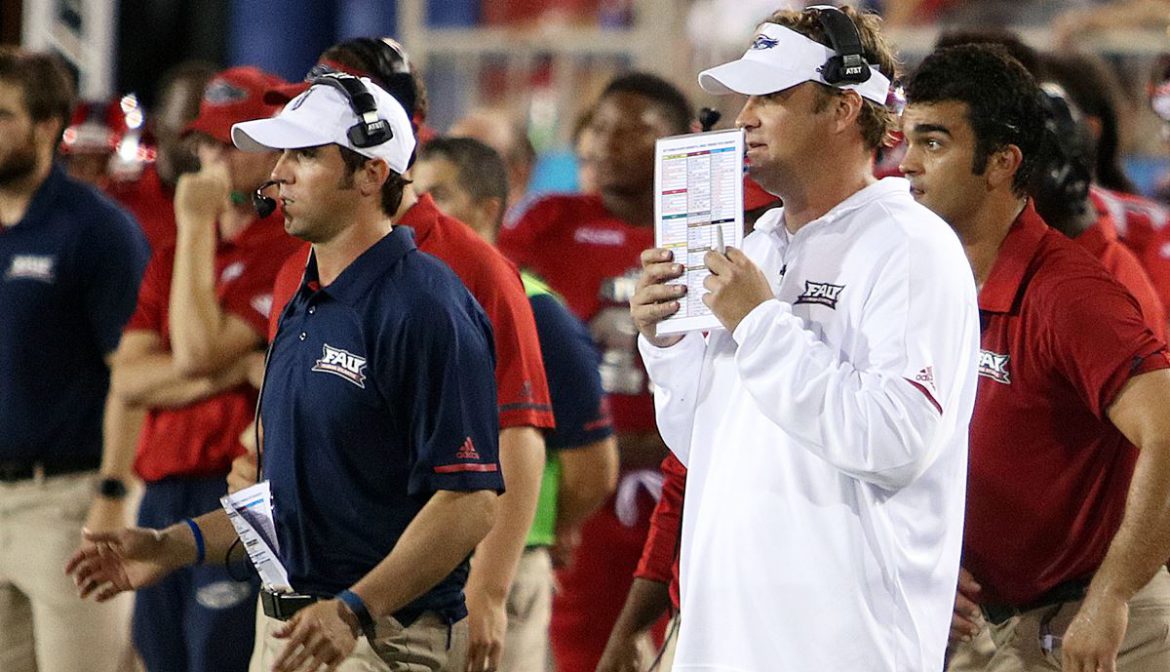 FAU coach Lane Kiffin (in white) and offensive coordinator Kendal Briles teamed up to produce one of the nation's most explosive offenses in 2018. (OwlAccess.com photo)

BOCA RATON – Having led FAU to a 9-3 record and it’s first Conference USA championship game appearance, Lane Kiffin is currently a popular name for those speculating about names that could fill coaching vacancies.

Kiffin’s status is a topic of interest – he joked on Tuesday that he entered a team meeting late, offering the excuse that he was on the phone with Tennessee – but offensive coordinator Kendal Briles’s name could become more prominent, shortly. That may have been the plan for Briles when he accepted the job.

After leaving Baylor amid the schools sexual assault controversy – a scandal to which Kendal Briles’ name has only been tangentially attached – Briles signed a one-year contract on Jan. 3 to be FAU’s offensive coordinator.

Except for defensive coordinator Chris Kiffin’s three-year deal, all of Kiffin’s other assistants signed two-year contracts. Even with the Baylor scandal still smoldering leaving Briles future in football uncertain at best, it was Briles, not FAU, who requested the single-year deal.

There’s no question Briles’ offense is producing for FAU. The Owls’ completed the regular season averaging 39.8 points per game, tenth best nationally. The 480.2 yards of offense FAU averages per game ranks No. 16. Known more for a passing offense, Briles showed his offense can adapt to differing personnel by taking advantage of Devin Singletary and Buddy Howell to average 283.4 yards per game on the ground – sixth best nationally.

Some Power 5 coach is likely to take notice, and that school will certainly be able to top the $350,000 Briles made this year to make him a Power 5 offensive coordinator. Or perhaps a school like UTEP or South Alabama might be daring enough to give the 35-year-old Briles his first head coaching chance.

Either way, should Briles accept a position elsewhere and leave Boca Raton prior to FAU playing in its yet-to-be-determined bowl game, the Owls could be left in quite a lurch.

Kiffin said last week that he’s “all in” on Briles’ offense. He knows the terminology, the language of the offense and could call the plays if he needed to, but admitted he doesn’t know the signals for each play. And he can’t simply refer to the playbook because, well, Briles’ Baylor offense doesn’t have a playbook.

“I could call plays,” Kiffin said. “I don’t think I would do as well as Kendal because I think Kendal has a very unique ability to signal them really fast and he thinks ahead to the next play. And it’s his terminology and his system.”

Having someone signaling plays who isn’t as fast as Briles would potentially remove one of the great advantages of the Baylor offense.

“The best way to explain it is, it’s got really good plays, but the plays aren’t what makes it – aren’t the No. 1 most important thing,” Kiffin said. “It is the pace. The speed. He goes the same speed all the time. I’ve never done that. I’ve had the fast and changed personnel in series. He basically never changes personnel in an entire series so you can’t sub on defense. He’ll go 14 plays and you can’t get guys in because he goes so fast all the time.”

Briles contract runs through December 31 of this year. If no action is taken by either Briles or FAU, it will be automatically renewed for another year on Jan. 1, 2018.

Decision Looming?
The contract of FAU offensive coordinator Kendal Briles expires after this season. With all the national coaching changes, could his name enter the rumor mill?
was last modified: November 28th, 2017 by Chuck King
0 comment
3
Facebook Twitter Google + Pinterest 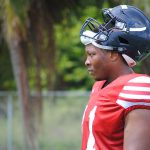 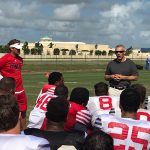