Island Sebree-ze
Jalen Sebree comes off the bench to score 21 points, leading FAU past Towson 85-71 in the Islands of the Bahamas Showcase.

Florida Atlantic rebounded from its opening round loss to Georgia Southern to defeat Towson 85-71 in the Owls’ second game at the Islands of the Bahamas Showcase, Saturday.

Leading by five early in the second half, FAU launched a 9-0 run that pushed the lead to double-digits. The Owls’ lead never fell below a dozen after that.

Freshman Jaylen Sebree came off the bench and scored a career-high 21 points to lead the Owls.

“Jaylen has presented a problem (for opposing defenses) because he’s letting the game come to him, he’s attacking in space and he’s shooting the ball well, which makes him a tough matchup,” coach Dusty May said.

FAU led by as many as 18 points in the second half.

The victory is the Owls third in four games to open the season.

Moving Forward: Jailyn Ingram recorded his second double-double of the season, scoring 20 points and grabbing 11 rebounds. …Xavian Stapleton bounced back from his worst game as an Owl to score 10 points. …Simeon Lepichev scored nine points and grabbed five rebounds off the bench

Moving Backward: Richardson Miatre tuned the ball over twice and didn’t score during his 12 minutes. He did record three assists, though.

Up Next: The Owls complete action at the Islands of the Bahamas Showcase on Sunday against Incarnate Word. Tip-off is set for 2 p.m. 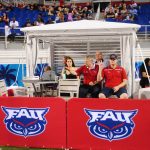