His Kind Of Town
Kerrith Whyte becomes the second FAU running back selected in this year's NFL Draft when the Chicago Bears chose him in the seventh round.

BOCA RATON – Kerrith Whyte’s bet on himself landed the former FAU running back in Chicago.

The Bears selected Whyte with the eighth pick of the seventh round, No. 222 overall in the 2019 NFL Draft. Whyte worked out for the Bears prior to the draft.

Never a starter at FAU, Whyte shocked many by declaring for the draft despite having one year of eligibility remaining. Whyte backed up Devin Singletary, selected earlier in this year’s draft by Buffalo, last season.

Whyte snared the attention of NFL scouts when he ran a 4.36 40 yard dash at FAU’s Pro Day, where he showed a 42-inch vertical leap, bench pressed 225 pounds 21 times and flew 11 feet in the broad jump – elite results that placed him among the best testing running backs this year.

Whyte delivered arguably his best performance in one of the Owls’ biggest games of the season. Had nine carries for 84 yards, including a long of 40 and had his first TD of 2018 on a Friday night at UCF. He also added a 23-yard reception and six kick returns for 157 yards, leading the Owls with 264 all-purpose yards

Whyte averaged 5.9 yards per carry during his three seasons and owns the only two kickoff returns for touchdown in FAU program history.

He left FAU having amassed 1,358 career rushing yards and 11 rushing TDs. A pass-catching threat out of the backfield, he caught 22 passes for 227 yards and two more TDs. Whyte also averaged 26.1 yards per kick return en route to 2,115 return yards during his career.

Assuming Whyte and Singletary come to terms with their teams, they will become the second and third running backs from the Owls’ 2017 Conference USA championship team to achieve their NFL goals. Buddy Howell, Singletary’s backup that year, is currently a member of the Houston Texans.

Whyte’s selection marks only the second time in FAU program history that two Owls were selected in the same draft. In 2014 safety Keith Reaser went the San Francisco in the fifth round and Buffalo selected linebacker Randell Johnson in the seventh.

His Kind Of Town
Kerrith Whyte becomes the second FAU running back selected in this year's NFL Draft when the Chicago Bears chose him in the seventh round.
was last modified: April 27th, 2019 by Chuck King
0 comment
0
Facebook Twitter Google + Pinterest 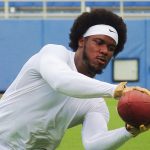