FAU overcame a seven-point halftime deficit to briefly take a second-half lead only to watch Marshall pull away over the final 15 minutes for a comfortable 96-84 victory in Huntington, W. Va.

After FAU scored 13 of the first 17 points to open the second half, Marshall responded with a 20-6 run to stretch its lead to a dozen with 10 minutes left in the game.

“We had to play a lot bigger than we’d like, and we had to play big because of our (reduced) numbers,” FAU coach Dusty May said, “They attacked us and separated from us.”

FAU’s already limited depth endured another blow on Wednesday when forward Madiaw Niang, a starter in recent weeks, twisted his ankle during Wednesday’s practice. He didn’t play on Thursday and is considered day to day.

The Owls drew within five points in the closing minutes, but Marshall made all 11 of its free throw attempts over the final 2 minutes to seal the win.

FAU actually out-scored Marshall from the floor, draining 30 of its 63 attempts. But Marshall made 29 free throws, while the Owls only attempted 21 foul shots, sinking 13 of them.

Michael Forrest scored a career-high 32 points to lead the Owls.

Key Stat: 21 – Turnovers committed by FAU while forcing only 11 from Marshall.

Up Next: FAU will attempt to snap its two-game losing streak when the Owls travel to Western Kentucky on Saturday for an 3 p.m. tip. 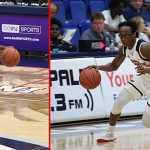